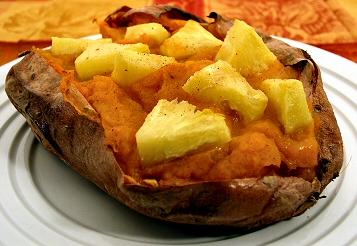 I was baking sweet potatoes last night, planning to serve them in all their natural glory (i.e. “plain”) when suddenly the pineapple on the counter caught my eye, and this idea was born. I’d already been toying with the thought of putting lite coconut milk on sweet potatoes, and fresh pineapple just seemed like a natural companion.

Here’s how I did it. (These instructions are for one large sweet potato.)

First I cooked the sweet potato in the microwave until done. For two really big potatoes in my microwave, that took about 12 minutes, turning once, but your microwave time may vary. Once the sweet potato was done, I put it into the toaster oven at about 375 F for 10 minutes or so to get crispy.

Once it was crispy, I took it out of the oven, put it on a plate, and cut a slit from one end to to the other. I opened it up, scooped out most of the flesh, put that into a bowl and mashed it.

To the mashed potato, I added about 3 tablespoons lite coconut milk, a squirt of agave nectar, a generous sprinkling of cinnamon, a dash of salt, and about 1/3 cup chopped fresh pineapple. I mixed it up well, and carefully stuffed it back into the potato shell. Then I arranged more chopped pineapple on top, drizzled it with another tsp. or so of coconut milk and another tsp. of agave nectar, and sprinkled on a little more cinnamon. (Walnuts would have been great too, but I didn’t think of that until now.)

I put it under the broiler for a few minutes to lightly brown the pineapple, and then I ate. It was heavenly! (Unfortunately, I couldn’t get E. to even try it. She enjoyed hers with Earth Balance vegan margarine.)

Note about the fat: The amount of lite coconut milk I used has about 3 grams of fat, which is not much, at least not to me. If you want to leave out the coconut milk entirely, go ahead. The pineapple is much more essential to the delicious taste.