This easy vegetable soup is full of the goodness of carrots, green beans, cabbage, zucchini, and white beans. 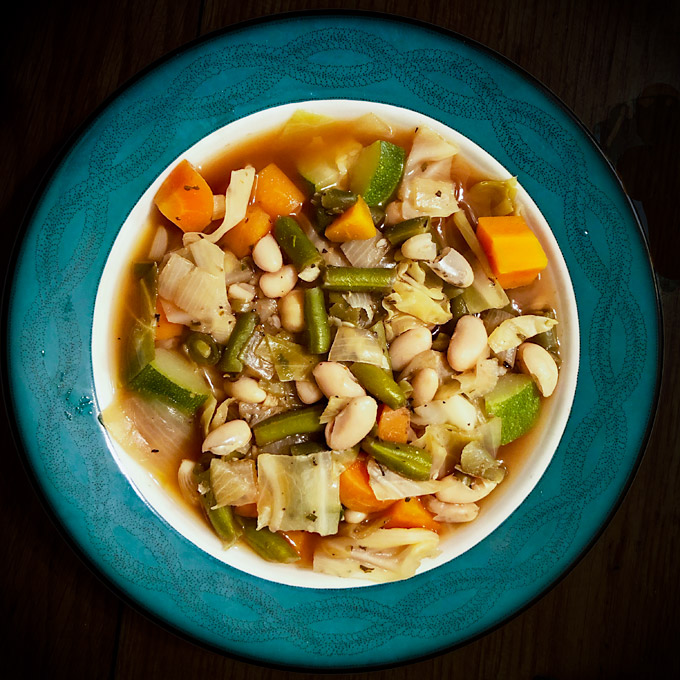 I tend to find a recipe I like and stick with it, so I’ve fallen into a vegetable soup rut lately. I’ve been making the same Bean and Vegetable Soup for a long time–it’s easy and we all like it–but sometimes I have to remind myself that there are other options out there, and some of them might be great.

So when I saw the Weight Watchers Zero Points Garden Vegetable Soup over at Alanna Kellogg’s incredible blog, A Veggie Venture, I thought that this might be the time to expand my horizons and try a new vegetable soup. It didn’t hurt that Alanna had marked it as a favorite recipe and named it as the best soup on her blog for January. Or that it’s filled with fresh veggies and nutrient-rich cabbage.

I decided to give it a try, with one little addition: I added a can of cannellini beans to turn this soup into a one-pot meal. I also increased the seasoning slightly because of the increased volume of the beans, but otherwise, this soup is exactly as Alanna posted it.

Simple though it seems, this soup was wonderful. And–attention parents–it is kid-friendly! When I asked how she liked it, E. was so busy spooning it into her mouth that all she could do was give me a thumbs-up signal. She asked for a second bowl, and she has leftovers in her thermos for lunch today.

Even with my addition of beans, Weight Watchers members and people following Eat to Live or the McDougall Program can enjoy this without guilt. 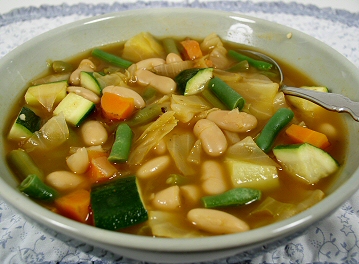 On February 17, 2018, I made this soup again and added the photo at the top of the page. On Weight Watchers’ current “Freestyle” program, plain beans and vegetables (no fat or sugar added) are all zero “smart points.” This recipe clocks in at 1 point because of the Imagine No-Chicken broth and the tomato paste.

One thing that I feel compelled to point out is that the type of broth you use is the most important factor in the flavor of this soup. I have made it with broth (bouillon, actually) that I don’t really like, and the results were not good. In my opinion, it would be better to make it with water than with broth you wouldn’t want to drink warm from a cup. If you do make it with water, try adding garlic powder and granulated onion to taste. 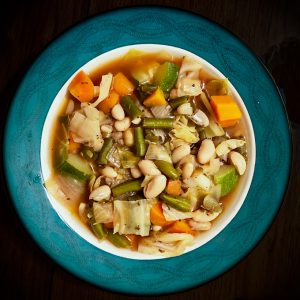 The amount of sodium and fat will depend on the type of vegetable broth used. I recommend Imagine No-Chicken for this recipe. Made with water instead of broth, this soup is zero points on Weight Watchers Freestyle program. Using Imagine No-Chicken broth makes it 1 point.
Nutrition Facts
Garden Vegetable and Bean Soup
Amount Per Serving (1 serving)
Calories 86 Calories from Fat 2
% Daily Value*
Fat 0.2g0%
Sodium 448mg19%
Carbohydrates 17g6%
Fiber 5g21%
Protein 4g8%
* Percent Daily Values are based on a 2000 calorie diet.