First let me say that what follows is not traditional sushi. Perhaps I shouldn’t even call it that. For those purists out there who think that you have to use white sushi rice in order to make sushi, I officially rename this meal Interesting Stuff Wrapped in Seaweed. But for brevity’s sake, I will refer to it here as Sushi.

Last night I made 5 different combinations of vegetable sushi, 4 with brown rice and 1 with no rice at all (especially for those of you following a low-grain or low-carb diet). I’ve been hesitant to use brown rice in sushi because I thought it would be hard to work with and not taste good, but I have to say that I think I’ve hit on the secret for delicious brown rice sushi: Lundberg Short-Grain brown rice. It may not look as pretty as traditional sushi rice, but we hardly noticed the difference as we were devouring these vegetable rolls last night.

To make the rice, I used more water than the Lundberg package suggests, at least a cup more. I started off 1 cup of rice in my rice cooker with the suggested 2 cups water, but when it was finished cooking and still not “sticky” enough for sushi, I added more water, hit the “cook” button, checked it when it shut off a second time, added more water, and just let it cook on the “warm” setting. The result was less sticky than sushi rice, but very workable. I removed it to a bowl to cool and added about 1/4 cup of sushi rice vinegar and a sprinkle of toasted sesame seeds. 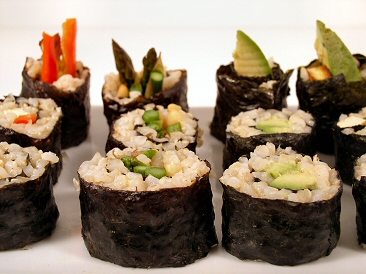 I won’t bother to tell you how to roll sushi. I’ve tried to describe it elsewhere, and there are some great on-line tutorials, with photos, so if you don’t already know the technique, it’s easy to learn it. I will describe the various fillings (from left to right) :

1) baked tofu and red bell pepper
2) roasted asparagus and toasted pinenuts ( 1 pound asparagus tossed with 2 tbsp. soy sauce and 1/2 tsp. sesame oil, roasted at 400 F for about 6 minutes, turning once)
3) avocado
4) everything (all of the above)

and the low-carb version I promised you: 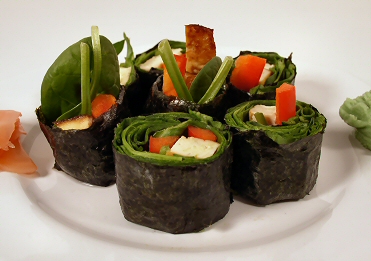 That’s fresh baby spinach used instead of rice with tofu, pepper, asparagus, and avocado filling. (This is very light, like eating your salad wrapped in nori.)

Along with the sushi we had the remaining roasted asparagus (I roasted a whole bunch, and it was incredibly good), the remaining avocado, and some boiled edamame. It was a great meal, but the kitchen was a disaster afterward! I think I’ll save my sushi-making for the weekend from now on.