I still had half a butternut squash left from when I made the Winter Ragout, so last night I decided to make this Winter Squash Stew, which Courtney had posted on the Fatfree_Vegan email list. Courtney is a great finder, adapter, and writer of fat-free, vegan recipes, so I was certain that anything she had posted was sure to be a winner–and I was right! 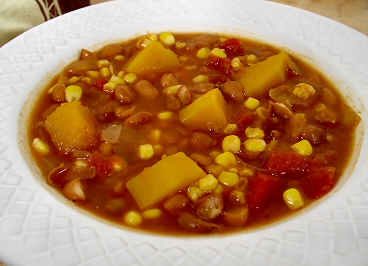 You’ll notice that I adapted this recipe, but not because of any problem with the recipe. The first adaptation occurred because I didn’t have a dried chili, as called for in the recipe. So I substituted about 1 tablespoon of chopped, canned chipotle pepper in adobo sauce. At least I think it was about a tablespoon. What I’ve been doing is this: whenever I open a new can of chipotle peppers, I invariably use only a small bit, so I’ve been chopping the remainder with a hand blender and freezing them in a freezer bag. When I need some for a recipe, I just break off a bit and add it. What I should have been doing is freezing them in ice cube trays in various amounts–teaspoons and tablespoons. But I’ve never been that organized, and I don’t know where my old ice cube trays are! So I may have been a little off on my estimation of one tablespoon.

Anyway, that was the first adaptation. After all the ingredients were added, I checked the seasonings, and it was HOT. Now, my husband D. and I love spicy food, but our daughter E. seems to have been switched at birth with this child who can’t tolerate heat. She’s pretty adventurous where most foods are concerned, but she draws the line at spiciness. So I knew I couldn’t serve her this stew unless I did something.

So what I did was add an extra can of pinto beans, an extra cup of corn, and a couple of tablespoons of tomato paste. And it was still spicy! But it was also very good. I didn’t want to ruin the recipe in the process of taking out the heat, so I settled on a compromise: I mixed E’s serving with about half a can of refried beans and some cooked brown rice, while D. and I ate ours “straight up.” It worked perfectly! In fact, E. liked hers so much that this morning she had me make a burrito out of the leftovers to go into her lunchbox.

I’m going to write this recipe up just as I did it. Be careful if you don’t like spicy foods, and be sure to check the original recipe to see how it’s really supposed to be done. 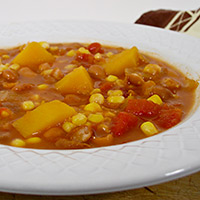 Thanks to Courtney for this recipe and for all the others she’s submitted over the years. (And Courtney, I hope this didn’t embarrass you!) 🙂