Even kids love these Creamy Vegan Scalloped Potatoes, even though they have no cheese or added oil. WFPB: Whole foods plant based and delicious! 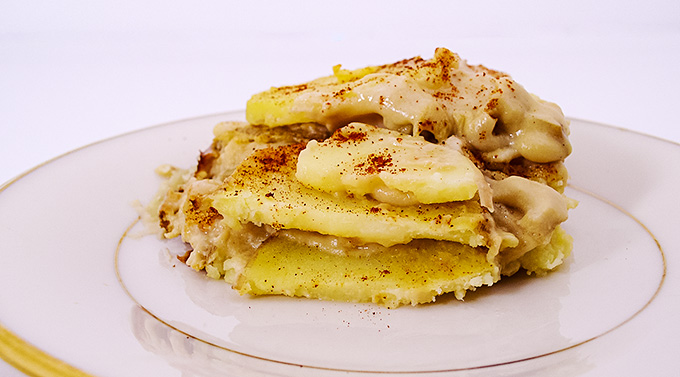 Even though she was raised on a vegan diet, my daughter E. doesn’t give her “Kid-Friendly Seal of Approval” to many dishes, particularly those that try to imitate the taste of cheese. Though she’s never eaten real cheese, she fell in love years ago with “Chreese,” a dry mix made by Road’s End Organics. Her tastes are so finely attuned to Chreese that she can detect my attempts at counterfeiting it just using her sense of smell. If it’s not Chreese, a fake cheese sauce doesn’t stand a chance with her.

Until now. Creamy Scalloped Potatoes has passed the ultimate kid-friendly test–The Cheezy, Unfamiliar, Gross-Looking Potato Dish Challenge. It has succeed even though it breaks three of E.’s rules: (1) All Cheezy Sauces Must Use Chreese; (2) No New Foods; and (3) All Potatoes Must be Baked, Mashed, or Oven-Fried. (All kids have rules. And we parents appreciate their long lists of food aversions as signs of their nascent individuality and quirky personalities . . . when we’re not fantasizing about shipping them off to some raw foodist boot-camp in Idaho!)

As I brought E.’s plate to the table, I was greeted with the words, “I’m not eating that!” I returned with the parental standard, “You have to at least try it.” This was followed by much grumbling, which was followed by much eating of the other foods on her plate. Finally, she reached the Cheezy, Unfamiliar, Gross-Looking, Un-baked-mashed-or-fried Potato Dish. She took a bite, then another, then another. “Hey,” she exclaimed, “you have got to put this on your kid-friendly list! I love it!”

So there you have it: a ringing endorsement for a cheezy-sauced recipe. And a list of rules that just got a little shorter. 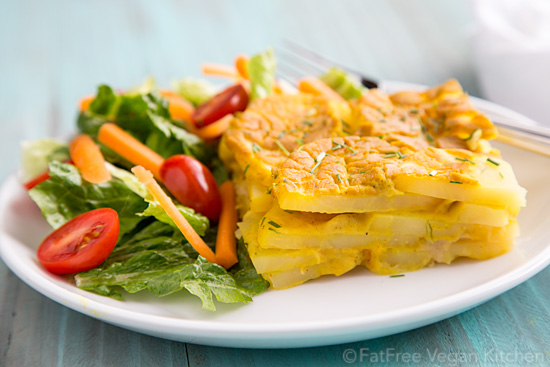 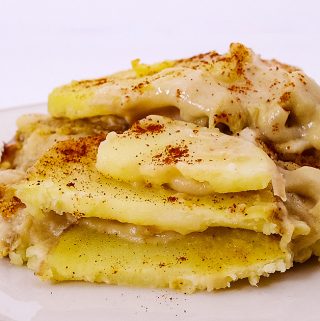 Usually scalloped potatoes have to bake for an hour or so. I’ve cut the baking time by pre-cooking the sliced potatoes. But be careful–sliced potatoes can become over-cooked quickly.
Prep Time 20 minutes
Cook Time 30 minutes
Servings 6
Author Susan Voisin