This vegan jambalaya is more like a paella or Spanish rice than a traditional jambalaya. It uses tofu that has been frozen, giving it a great chewy texture. 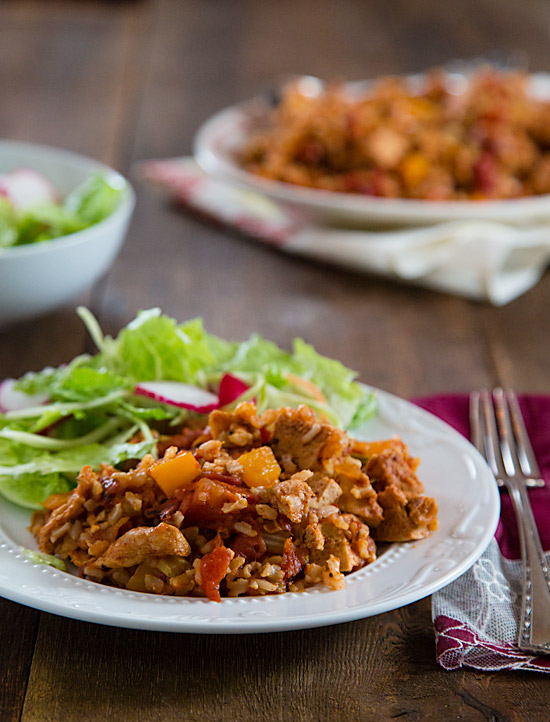 I’m going to be away from the computer for a few days, but before I go, I’d like to share with you a couple of recipes from my native state, Louisiana.

First up is a somewhat non-traditional jambalaya, based on a recipe for Chicken Jambalaya that I used to love in my omnivore days. It came from a book called River Road Recipes, one of those collections of recipes of the type you can find in most states, put out by the Women’s Auxiliary or the Junior League or whatever. It’s food the way people actually cook at home rather than how some fancy chef does it, so many of the recipes are easy and use short-cuts that save time. And they’re tested on family and friends, so they’re good. Like this one. 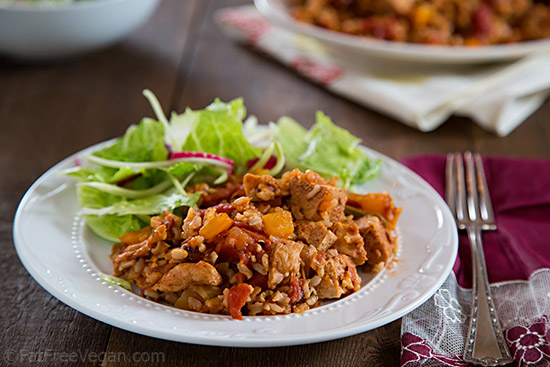 This vegan jambalaya is more like a paella or Spanish rice than a traditional jambalaya, but I’ve been cooking it for years and everyone who tries it loves it. It uses tofu that has been frozen and thawed, giving it a spongy texture that absorbs the seasonings and makes it chewy.

To work right, the tofu needs to be frozen for at least 24 hours. The simplest way to to do this is to slice it into 1/2-inch slices, put them into a freezer bag, and freeze. When it’s time to cook, either defrost them in the fridge for a few hours or in the microwave. Squeeze them gently to remove all water and them cut them into cubes.

If waiting for tofu to freeze and thaw would take too long, feel free to substitute another “chickenish” meat substitute. I’ve used both soy curls (about 2 cups, measured dry and then rehydrated) and Quorn’s new vegan chicken tenders (1 package, cooked). The soy curls probably taste the best, but the tofu comes in a close second. 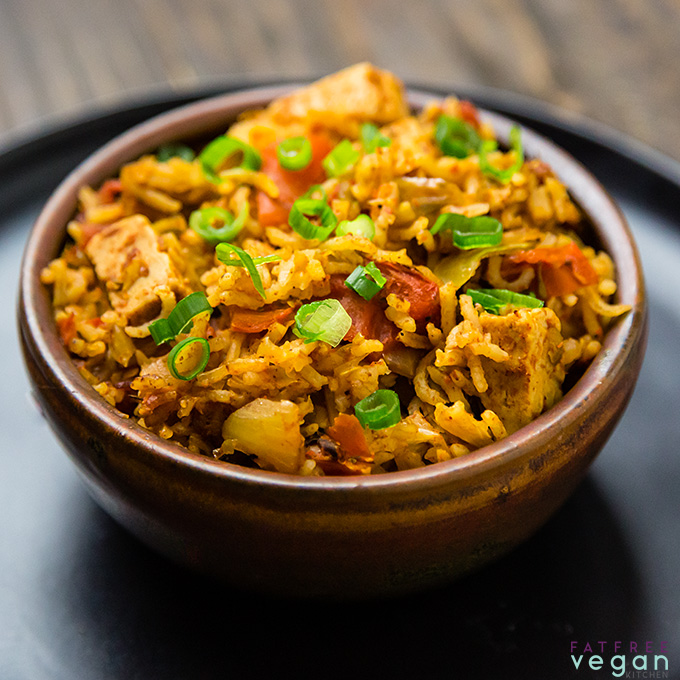 This vegan jambalaya is perfect for your next Mardi Gras party. If you’re looking for more Cajun or Creole dishes, you can find all of my Louisiana recipes here. 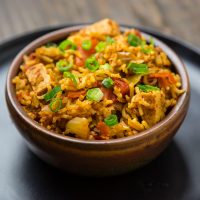 This flavorful vegan jambalaya is more like a paella or Spanish rice than a traditional jambalaya. It uses tofu that has been frozen, giving it a great chewy texture. The recipe makes about 4-6 servings. Once you’ve had this recipe, you’ll do like I do and keep a package of tofu in the freezer at all times!
Prep Time 15 minutes
Cook Time 40 minutes
Total Time 55 minutes
Servings 6
Author Susan Voisin

You can do this with brown rice by par-boiling the rice first: pour rice into a large pot of boiling water and boil for 15 minutes. Drain well in a colander. Add to the recipe when rice is called for. If you don’t have frozen/thawed tofu, substitute 2 cups of dry soy curls. Rehydrate them in vegetable broth before using. One package of Quorn’s Vegan Chicken Nuggets, cooked, also makes a good substitute. Nutrition data below is for 1/6th of the recipe. With tofu, each serving is 3 points on Weight Watchers Freestyle program. Soy curls add additional points. With Quorn’s Chicken Tenders, a serving is 4 points.
Nutrition Facts
Tofu Jambalaya
Amount Per Serving (1 Serving)
Calories 239 Calories from Fat 39
% Daily Value*
Fat 4.3g7%
Sodium 707.6mg31%
Potassium 196.6mg6%
Carbohydrates 38g13%
Fiber 3.6g15%
Sugar 6.8g8%
Protein 12g24%
* Percent Daily Values are based on a 2000 calorie diet.

Course Main Course
Cuisine Louisiana, Vegan
Keyword vegan Cajun, vegan jambalaya
Have you made this recipe?Mention @SusanFFVK and tag #fatfreevegankitchen in your photos on Instagram.
Share on Facebook Pin This Recipe Share by Email 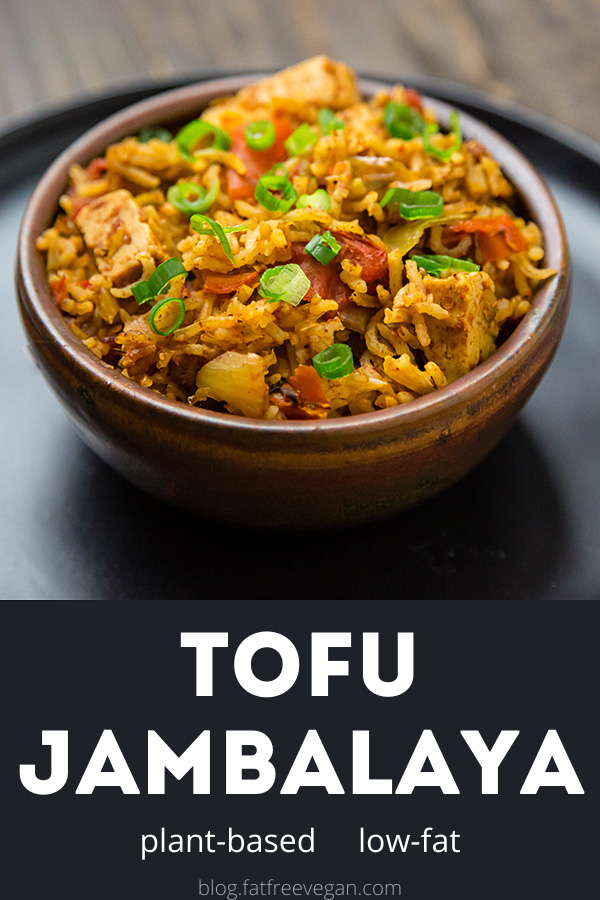 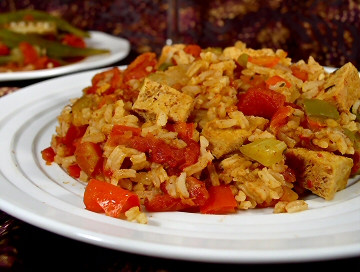