Red lentils and eggplant form a creamy, rich sauce for chickpeas and barley in this hearty plant-based dish. 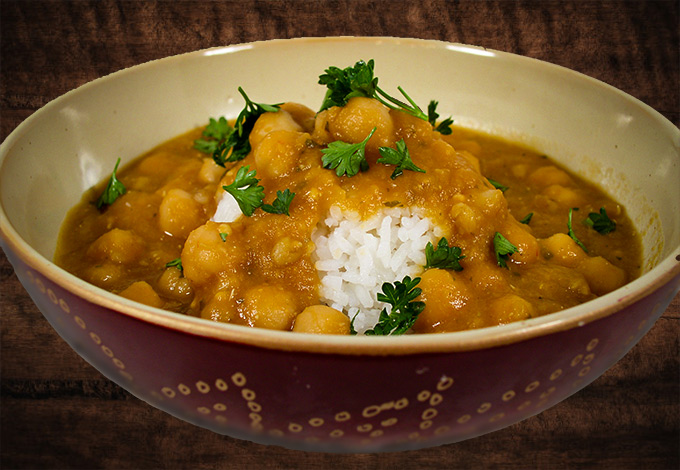 Today’s recipe is based on a recipe in Madhur Jaffrey’s World Vegetarian, Anatolian Red Lentil Stew with Wheat Berries and Chickpeas, which I wound up adapting more than I meant to.

The first adaptation was out of necessity: I didn’t have wheat berries so I used barley instead, and I served it over rice (jasmine rice) because I felt it could use more grain.

The second adaptation was out of ignorance: I assumed that one regular-sized eggplant could substitute for 2 small ones, but only after making the recipe did I read the introduction to it in which Ms. Jaffrey states that “you may use a 4-ounce portion” of a larger eggplant. Oops! I used a lot more than 4 ounces. (But perhaps I would have anyway; I’m all about getting as much vegetables into a dish as possible, and eggplant sauce certainly achieves that.)

And of course I left out the 1/4 cup of olive oil the recipe called for; I’m so used to leaving out oil that I hardly think of that as an adaptation anymore.

The next change came mid-way through the recipe when I saw that the “stew” was much more like a soup, so I added a second can of chickpeas. (I would have added more barley too, if I had had any more cooked.)

Finally, the most important change came at the end, when I tasted the stew: It was so bland that I had to add some spices or else risk not being able to eat it. The original was seasoned only with dried mint (I used fresh), but I added cumin and red pepper flakes–and it still could have used more seasoning. After so many changes, I didn’t feel it was right to call this “Anatolian” or Turkish or even stew.

On the positive side, my daughter E liked it and didn’t even realize she was eating eggplant (it’s blended into the sauce). Sometimes blended food has its benefits! I invite you to take this recipe and add to it whatever spices fit your mood. 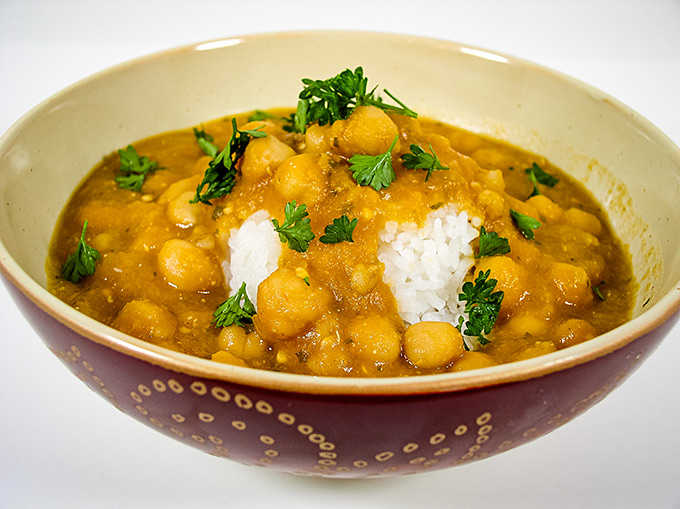 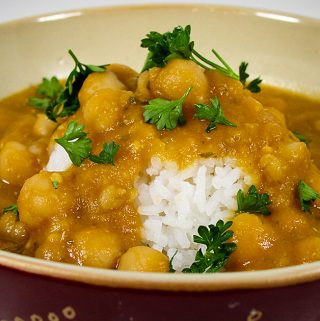 Chickpeas and Barley in Red Lentil and Eggplant Sauce

Eggplant and red lentils form a delicious sauce for chickpeas and barley. You can add as much spice as you like.
Prep Time 20 minutes
Cook Time 1 hour 30 minutes
Total Time 1 hour 50 minutes
Servings 6
Author Susan Voisin