Normally I don’t do a lot of baking, but this week I found myself baking banana bread in addition to the most important thing I bake all year–my daughter’s birthday cake, which is in the oven even as I type. This year, I decided to reduce the fat in my traditional recipe a little by using the time-honored technique of substituting apple sauce for some of the oil. If you’ve looked at or made any of my bread or cake recipes, I’m sure you’ve noticed it. What I haven’t let on is a little secret that makes adding apple sauce to recipes very easy: 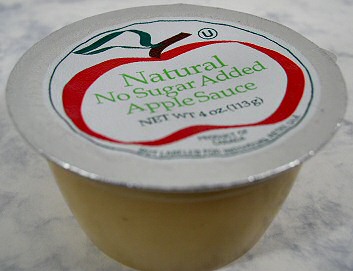 Individual serving packages. I used to buy those big jars of natural apple sauce, use a half-cup or so, put the rest in the fridge, and then a month later find green fur growing in the jar. After throwing away a few jars of barely-used apple sauce, I found myself reaching for the little snack-sized containers that my daughter takes for lunch. These come in 6-packs, and each holds 4 ounces, which is a little more than 1/3 cup and not quite 1/2 cup. When you see me indicating 4 ounces of unsweetened apple sauce, that’s what I’m using. Now you know my trick.

The birthday cake is now out of the oven, and the whole house smells like . . . . oops, can’t tell you the flavor. It’s a surprise, you know! Check back later tomorrow night for all the details, photos, and possibly even a recipe.