Fennel and fingerling potatoes have finally come to the deep South! Well, maybe the fennel was here all along and I just wasn’t looking for it, but I’m pretty sure that I grabbed up one of the first bags of fingerlings to hit the Jackson, Mississippi, grocery stores. And since I found them around the same time, it’s only right that I use them in the same dish. (Good thing I didn’t find fennel and something like blood oranges, huh? Although now that I think about it….)

Anyway, this is an adaptation of a recipe I found at epicurious.com, Braised Fennel and Potatoes. It called for sliced red potatoes, but I just couldn’t bring myself to slice the fingerlings. After all, they wouldn’t keep their distinctive shape if I sliced them. And they are distinctive. I don’t think they look so much like fingers as like….well, you be the judge: 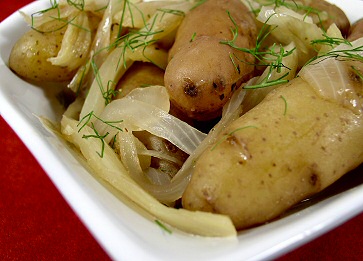 In a medium-sized pot, cover the fingerlings with water and bring to a boil. Cook, covered, until the potatoes are just tender–a fork can pierce the potato with gentle effort–about 15 minutes.

While the potatoes are cooking, chop enough of the fennel fronds (leaves) to measure 2 tablespoons; set aside. Then cut the stalks off the bulbs, take a thin slice off the bottom, and quarter them. Remove the hard core from the quarters and then cut the quarters lengthwise into 1/4 slices.

Lightly brush or spray a large, non-stick skillet with olive oil. Cook the fennel and onion over medium-high heat until the onion is softened, about 5 minutes (add a tablespoon of water if necessary to prevent the onions from drying out). Drain the potatoes and add them to the skillet along with the pepper, salt, and vegetable broth. Cover and cook for 10 minutes. Uncover and cook for 5 more minutes. Stir in reserved fennel fronds before serving.

We all liked this, even my husband who admitted that he was a little worried about mixing fennel (which he described as “licorice tasting”) with potatoes. E. said to tell you that it was kid-friendly; she ate plenty of the potatoes and tried to eat the fennel while avoiding the onion–not an easy task because they look so much alike once they’re cooked.

I served this with a recipe that I got from another blogger, one that turned out to be a huge hit with all of us (D. kept saying “this is out of this world,” his highest praise). You will have to tune in tomorrow to find out what that recipe was and how I slightly adapted it. There’s only so much typing I can do in one day!