Have you ever played Telephone? You know, the children’s game where one person whispers a story to another, who whispers it to another, and so on, until the last person retells the story and it has lost all semblance to the original? I’ve been thinking that food blogging is a lot like that: Someone posts a recipe that looks so good that other food bloggers just have to try it; only, when we make it, we inevitably change it, maybe because we don’t have the same ingredients or because we don’t like one of the ingredients (damn cilantro! ) or just because we have a complete inability to follow a recipe as written (guilty on all three counts). So one person blogs about a recipe, which is often an adaptation of a published recipe, another adapts the adaptation, and still others adapt the adaptation of the adaptation. I’d love to be able to track a recipe all the way from its first publication to its last adaptation, but I’m afraid there is no such thing as a last adaptation: Each person who cooks a recipe is likely to change it in one way or another.

Which brings me to today’s recipe. When I first saw Red Lentil & Rice Patties with Cilantro Sauce on Catherine’s blog, Albion Cooks, I knew it was something I had to try. Her description of its “sophisticated combination of flavors” grabbed my attention right away, though I was worried that I wouldn’t get the full experience because I absolutely cannot eat cilantro: it tastes like soap and leaves me, literally, foaming at the mouth. So I was prepared to make the sauce with mint instead until, mid-recipe, I ran into a little problem: I didn’t have any coconut milk in the house, or even enough coconut to make coconut milk. I had about 1/4 cup of dried coconut in the fridge, and that was it. So I decided to make the burgers pretty much as Catherine had but replace the sauce with an adaptation of my Miang Kum sauce. So in the process of adapting Catherine’s recipe, I wound up adapting my own recipe (which is actually an adaptation of another recipe), too!

Whatever the process, the end result was, as my husband kept repeating, out of this world. The mellow taste of cumin in the patties is an unexpected surprise beneath the sweet, coconut-mint flavored sauce. Sophisticated indeed! 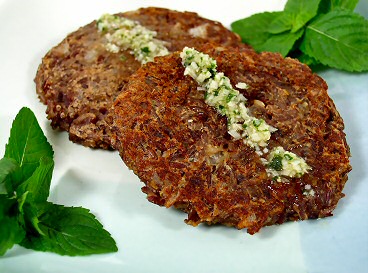 I simplified the recipe by putting the first 7 ingredients into the rice cooker and cooking them until it shut off. If you don’t have a rice cooker, you may be able to cook it over low heat in a covered pan, as you would rice. Or, follow the instructions in the original recipe.

When the rice mixture is done (and the rice is completely tender), let it cool until it’s easy to handle. Add the cornstarch and mix gently. Shape into patties and fry in the sesame oil until browned on each side, about 3-4 minutes. Serve with sauce, below.

Oven option: Bake on silicone baking mat or parchment papers at 350 for 40 minutes, turning after 20 minutes. No oil needed.

If you bake them instead, without the oil, the count is:

Puree all sauce ingredients in a blender until smooth.

I’m happy to report that this was kid-friendly but also a little embarrassed to note that E. ate it with (close your eyes, foodies) ketchup! She loved it, though, and wants me to make it again. I’ll try to get her to eat it with the sauce next time, but I’m not making any promises.