This vegan quinoa salad features tiny pearls of quinoa drenched in tangy, chili-seasoned dressing, with cubes of avocado that melt in your mouth and cucumbers and chickpeas for a little bit of crunch. 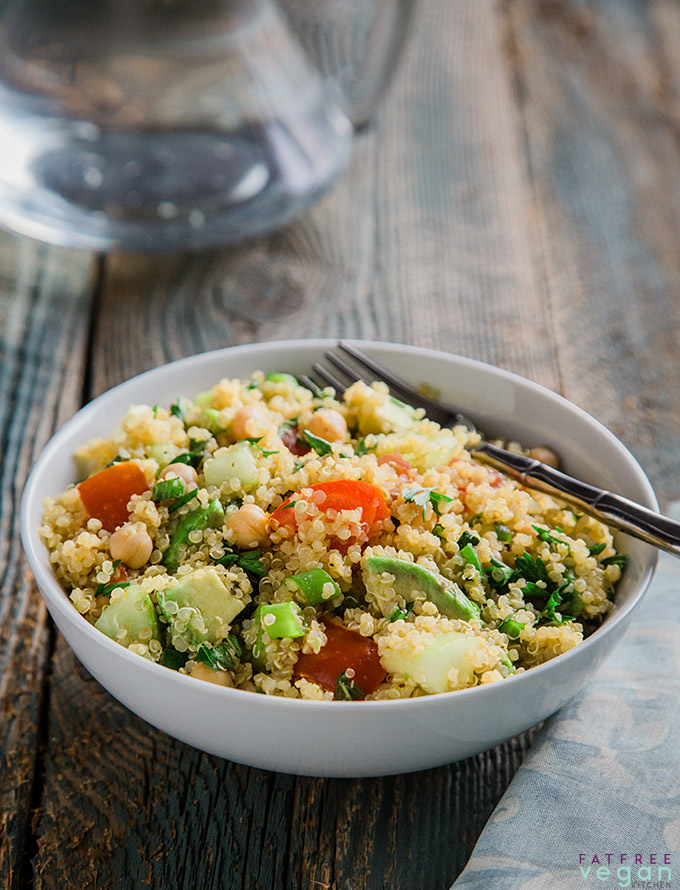 Whenever my husband sees that I’m cooking quinoa, his eyes light up and he asks if I’m making “The Salad.” It’s our favorite quinoa dish, but for a while I made it only on special occasions because I couldn’t figure out how to make it without using olive oil. I was just afraid that it wouldn’t be as tasty–and who can stand to see a favorite dish diminished?

But I was determined to try to lighten up the recipe so that we could enjoy this fantastic salad more often, and I’m proud to say that I’ve done it. I think that this recipe is so good that you’ll never miss the olive oil.

It’s based on a recipe by Lorna Sass called Quinoa Salpiçon, a sort of South American version of the Middle Eastern grain salad tabouli, with lots of parsley as in tabouli but using quinoa instead of bulgur wheat. I like to think of it as a blend of cultures, a little of the Old World mixed with the New, though even the “new” ingredients date back thousands of years.

Quinoa was first cultivated 5000 years ago. It was a staple food of the people in the Andes Mountains in Peru and Bolivia and was considered a sacred grain of the Incas. Chickpeas were first cultivated around 7000 years ago in Turkey, but their use spread from there to western Europe, and they’ve become an important part of the diets of many cultures. 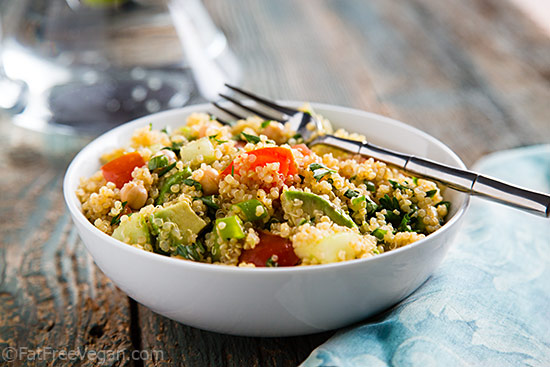 I took the original salad and added a few ingredients–the corn and chili powder to enhance its South American flavor and the chickpeas to complement its Middle Eastern roots. And, of course, I’ve made it oil-free by replacing the olive oil with vegetable broth. The result is wonderful–tiny pearls of quinoa drenched in tangy, chili-seasoned dressing, with cubes of avocado that melt in your mouth and cucumbers and chickpeas for a little bit of crunch. It’s a perfect marriage of ingredients–and cultures. 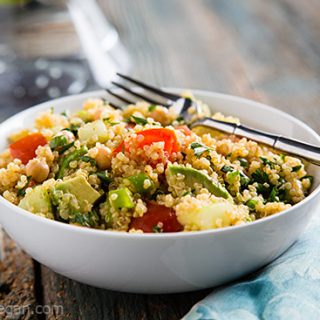 Course Main Course, Salad
Cuisine Gluten-free, Vegan
Keyword vegan quinoa salad
Have you made this recipe?Mention @SusanFFVK and tag #fatfreevegankitchen in your photos on Instagram.
Share on Facebook Pin This Recipe Share by Email