I’m going to share this elegant-looking dessert with you even though I’m the only person in my house who will eat it. My husband, apparently, does not like pears. He’s told me that before, but I guess it just didn’t register because I can’t imagine anyone not liking pears–or any other fruit. (I can’t think of a single fruit I don’t like.) So he didn’t even try this. My daughter, on the other hand, tried one bite of it but didn’t want more. She likes pears, I think. Maybe she doesn’t like cooked pears? Oh well, more pears for me!

The recipe is super-fast and easy because you use a microwave to cook the pears. If you don’t like microwaves, you can cook the pears on the stove, but you’ll need to simmer them in fruit juice or other liquid, whereas if you cook them in the microwave, you’re basically poaching them in their own juices. 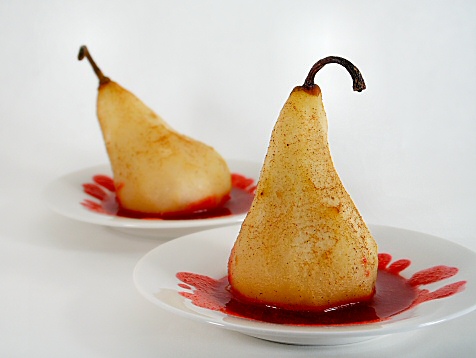 Peel the pears and trim the bottoms to that they (maybe) stand upright. Put them in a microwave-safe casserole dish, drizzle them with the maple syrup and sprinkle them with cinnamon. Cover tightly with plastic wrap. Cook on high power until they are tender, but not mushy, about 8-10 minutes. When they’re done, lift them out of the dish and place them on serving plates. Reserve any of their juices to add to the raspberry sauce.

If the raspberries are frozen, heat them in a saucepan until they’re thawed. Then put the raspberries and orange juice in a blender, and add any juices from the pears. Puree until completely blended. Set a strainer over the saucepan, and pour the raspberry mixture through it, stirring and pressing on it to force the juices into the pan while removing the seeds. Add the orange liqueur and sweetener to taste. Heat, stirring, until mixture thickens slightly, about 5-10 minutes.

Serve the pear on a dessert plate or bowl surrounded by raspberry sauce. Garnish, if you wish, with extra raspberries.