Day 5 is finally here! It’s been a hectic week for me. Normally I do the bulk of my cooking at night so I can write about it the next morning, when I’m at my most energetic. Having to make a photogenic salad, photograph it, eat it, and then, still stuffed from lunch, write about it has been more draining and time-consuming that I would have thought.

So today, rather than put my salad on a fancy plate that I would rarely use in real life, I thought I’d paint you a more realistic picture and show you the salad I eat most often in the bowl I actually use on a daily basis: 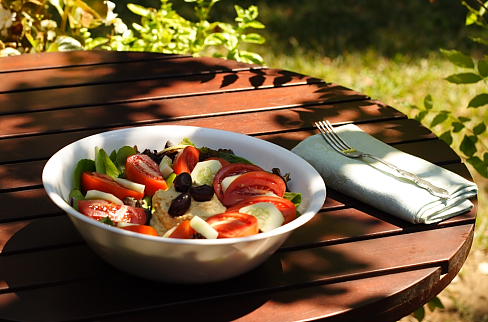 That’s Hummus Salad in a lovely, 2-quart Corelle salad bowl. I fill this bowl up every day with salad and eat the entire thing for lunch. The bowl is exactly the right size for my salads, and (here’s an embarrassing admission) I’m so attached to it that once I broke it and had to run out the next day and get one exactly like it (which is easy to do since it’s mass-produced Corelle).

I first started making hummus salads when I began trying to cut down on bread. I can give up bread, but giving up hummus was out of the question! I’ve never been a fan of baby carrots or other raw vegetables, so I needed to find another way to convey the hummus to my mouth. I discovered that hummus is just as good on lettuce and tomatoes as it is on pita bread or crackers. 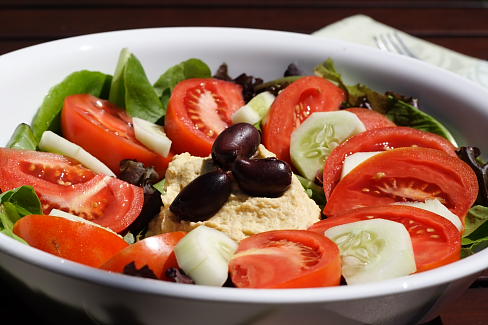 I start with a full bowl of lettuces (this time it’s baby romaine) and often toss in a couple of handfuls of broccoli slaw. I put a nice big scoop of hummus (this time it’s regular hummus) right in the center of the lettuce and add cucumber and tomatoes. I usually drizzle on a little dressing: My favorite is Pecan Dijon, but I have also used fat-free Italian and Sesame-Ginger. Today I threw in three pitted Kalamata olives (my one attempt to pretty this up, but they tasted great, too).

Some people use a thinned down hummus as a salad dressing, and that’s fine. But I like to eat the hummus as a sort of dip; I dip each bite of the salad in a little hummus as I eat it, and I enjoy the hummus more that way than if I used it as a dressing.

So that’s the last salad of the week. I’m going to take a little break from posting salads–though not from eating them! I’m going to make it a goal to try to post more salad recipes, however, so keep those ideas coming.

And while we’re on the subject of salads, the recent e-coli outbreak that’s been traced to spinach has been a reminder to me to always wash those bagged salads well. All too often I’ve been in a hurry and trusted other people to “triple wash” my lettuces for me. If you haven’t been washing bagged salad greens, please start today. And if you live in the U.S. and you have any bagged spinach on-hand, play it safe and throw it away.

Other Salads This Week: