My family is crazy about soy yogurt. My husband puts it on his breakfast cereal, my daughter likes it in smoothies, and I eat it with fruit, mostly frozen berries at this time of year. But I have a problem with store-bought soy yogurt. The only brand I can find “plain” is Whole Soy, and it’s neither plain nor wholly soy: Organic Evaporated Cane Juice is the second ingredient, and for a supposedly plain yogurt, it tastes very sweet. I find that it’s impossible to use it in non-sweet dishes such as raitas because of its excessive sweetness. To top it off, it doesn’t even taste very “yogurty”—it’s missing the distinctive tang of real yogurt. 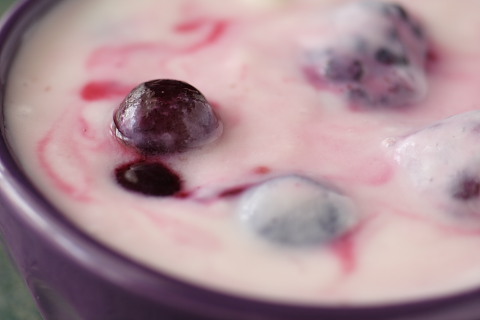 So around the time I bought my soymilk maker, I decided to buy an inexpensive yogurt maker. While you can make yogurt in any container that you can keep warm, I’ve found that my drafty house isn’t the most reliable place to make yogurt. The Salton yogurt maker is just a simple device that keeps the yogurt at a stable temperature, and when the yogurt is finished incubating, the container goes right into the refrigerator. No more contributing to landfill waste with those plastic yogurt containers! If you make your soymilk at home, the cost of homemade yogurt is a fraction of the cost of Whole Soy, but even using packaged soymilk, you can save a lot by making your own.

The one big difference between soy yogurt and dairy yogurt is that soy yogurt won’t get as thick as dairy unless you add something to it for thickening. For a while I was adding pectin to my yogurt, as instructed by Bryanna Clark Grogan’s tutorial on soy yogurt (which is, unfortunately, no longer available online). I kept having uneven results, however; for some reason, my yogurt sometimes came out with lumps of pectin in it, but other times, it was fine. I finally decided to try using agar instead, and lately I’ve had more consistent results. I don’t use a lot of agar because I don’t want it to come out jelly-like; instead I use just enough to give it a slight thickness. It’s not as thick as dairy yogurt, but it’s thick enough for how I use it.

The following instructions were written for using packaged soymilk. For best results, select a brand that is not fat-free. (I know, this is that last place you thought you’d hear that!) Different brands produce different results, so be prepared to do some experimenting to find out which brand works well for you. I’ve found that Soy Dream works better than any of the other brands I’ve tried and also makes a whiter yogurt. (Unfortunately, Soy Dream was unavailable when I was making the batch in the photos below; I’m using VitaSoy Complete, which my husband bought on clearance, and it’s off-off-white. Beware of letting spouses shop!) If you are using homemade or unsweetened soymilk, add 1 tablespoon of sugar to it–yogurt cultures need some sugar to feed upon. 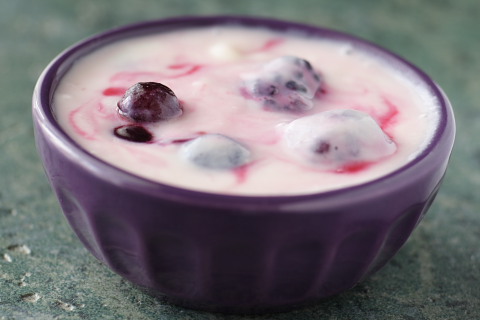 This recipe will fill a yogurt maker that uses a single 1-quart container.

1. Take 1/2 cup of plain soy yogurt out of the refrigerator and allow it to come to room temperature.

2. Put a kettle or pot of water on to boil. While it’s heating, gather your materials:

3. When the water boils, scald the dinner plate first, making sure that the whole surface comes into contact with the water. Then scald the other utensils, including the thermometer, and place them on the plate. Be sure you also scald the hand blender or whisk, the bowl, and the yogurt maker’s container and anything else that might come into contact with the yogurt. You don’t want any stray bacteria growing in your yogurt! 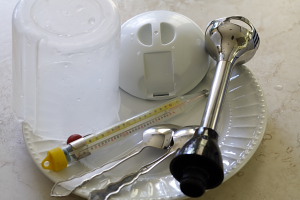 4. Put two cups of the soymilk into the bowl and sprinkle it with a teaspoon of the agar powder. Allow it to soften for a few minutes. Then place the bowl in the microwave and set it on high power for about 4 minutes. Stir every minute until it reaches a boil. 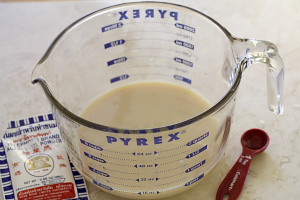 5. When the soymilk reaches a boil, remove it from the microwave and add the remaining two cups of soymilk. Stir well. Put the food thermometer into the milk and wait until the temperature drops to about 115° F. While you are waiting, stir the soymilk every once in a while to keep the agar from gelling. 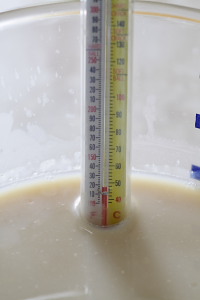 6. Plug in your yogurt maker to begin warming it.

7. When the temperature of the soymilk drops to 115° F, add the 1/2 cup yogurt. Blend it in very well using either a whisk or hand blender. Pour it into your yogurt maker’s container and place inside the yogurt maker. Plug in or turn on your yogurt maker. 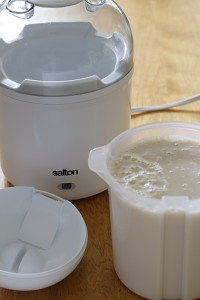 8. Check the yogurt after 5 or 6 hours. If it’s as tart as you’d like, you may stop then, but normally it will take about 8 hours to reach the right tartness. (I find that when I use store-bought yogurt as a starter, it takes much longer, often 12 hours, to be ready.) Do not worry if it has separated. When it seems tangy enough, remove it from the incubator and whisk or blend it well with the hand blender. Put it into the refrigerator and chill for several hours. Your yogurt will now be ready to use.

Once your yogurt is made, you can mix it with fresh or thawed fruit, use it in smoothies, or use it in any recipe calling for yogurt. Be sure to save 1/2 a cup to use as your next yogurt starter.