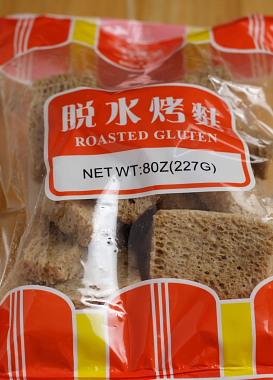 This package of roasted gluten has been in my pantry ever since I bought it at the Hong Kong Market right after Thanksgiving. I’ve been searching for a way to use it but couldn’t find a mention of it in any of my Japanese or Asian cookbooks (including Madhur Jaffrey’s World of the East). I came up almost as empty on the internet, though I was able to piece together that dried, roasted gluten is called yaki-fu in Japan and that it is used in soups and simmered dishes like sukiyaki.

You can see from the photo that yaki-fu looks like croûtons or bread that has been toasted and dried. The kind I bought is very hard and sometimes nearly 3/4-inch thick. (I tried to break a piece before cooking and couldn’t; when I tried to cut it, it tended to crumble so I stopped for fear of losing too much to crumbs.) When it’s cooked, it absorbs water and becomes easy to break apart, though since it’s made completely of wheat protein, it doesn’t dissolve in water like bread would. It has a texture that’s hard to describe, different from any food than I can think of–spongy like frozen tofu but puffier, rougher, and less dense. Whatever flavor it has comes from the broth that it’s cooked in.

Obviously, this isn’t a gluten-free food, but for vegetarians who are avoiding soy, roasted gluten is an excellent source of protein. One ounce contains almost 10 grams of protein and only 58 calories. To make this stew, I used about 1/3 of an 8-ounce package, which was more than enough for a 4-serving pot of stew. (Never fear: If you can’t use roasted gluten, I’ve included some substitutes in the notes after the recipe.)

This stew is in the tradition of oden, a Japanese winter stew of root vegetables simmered in a clear broth. The roasted gluten stands in here for fried tofu and fish cakes, and kombu (kelp) added to vegetable broth replaces the fish-based dashi. If you can find it, mushroom bouillon or broth gives the stew a much greater complexity than standard vegetable broth. 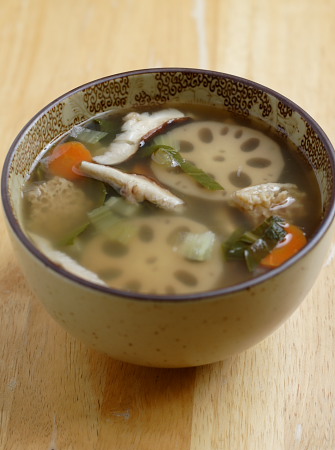 Bring 6 cups of water or broth to a boil. Add bouillon, if you’re using it, and the soy sauce and mirin. Rinse the kombu and add it to the pot along with all the remaining ingredients. As the gluten softens up, break it with the edge of a spoon into bite-sized pieces. Simmer for about 30 minutes, adding water if it becomes dry. Remove the kombu before serving (unless you like the taste and texture). Serve with hot mustard paste (see photo below).

Go crazy and put whatever veggies you want in this. Some additions that I plan to try are 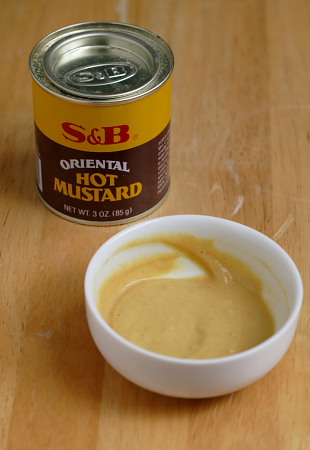 To make mustard paste, just add water to the dried powder and stir until it is the right consistency. Start with about 1 tablespoon of powder for 4 servings and add more if necessary.