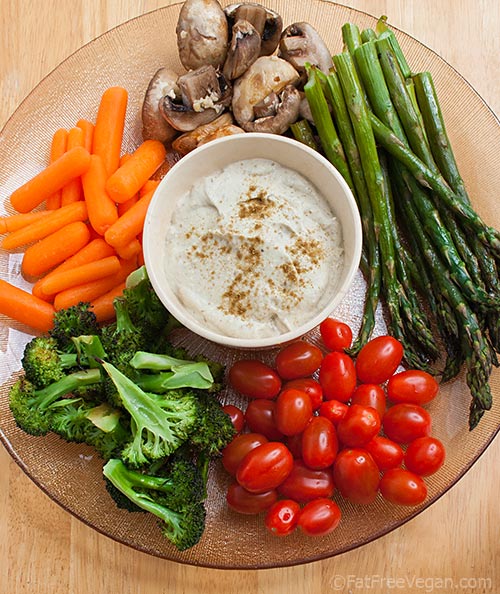 I absolutely love baba ganoush. I often say that I could live on it, and believe me, if it were eggplant season right now, I would have it almost every day.

It wasn’t always so. In the past I had to ration my beloved baba, saving it up for an occasional treat. My self-denial wasn’t caused by anything wrong with the delicious dip itself–on the contrary, the combination of roasted eggplant, garlic, lemon juice, and just enough sesame paste is very healthy.

The problem was in conveying it to my mouth. In short, baba ganoush allowed me to pig out on bread–pita bread, crackers, or whatever loaf I could find in the house. For someone with a near-compulsive attraction to refined carbs, “a little bread” is just not possible. 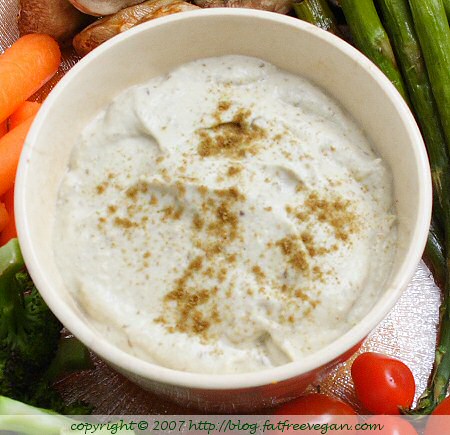 But my embargo on baba ganoush ended recently when I found that vegetables are not only capable of delivering baba ganoush to my mouth, but they also taste great doing it. It took me a while to figure this out because I never was a big fan of crudités: I prefer broccoli or cauliflower cooked, and the thought of raw celery makes my teeth hurt. But I can tolerate baby carrots and I love those little grape tomatoes, so all I needed to do was figure out a couple more vegetable dippers that I would like enough not to miss the bread.

I immediately thought of asparagus. Since it’s asparagus season, I’ve been buying loads of it and cooking it several times a week, usually roasted. Roasted asparagus tastes great with everything, in my opinion, so of course it would be wonderful with baba ganoush.

Since I was heating up the oven anyway, I also tossed in a couple of other vegetables: broccoli florets and halves of large mushrooms. Contrary to popular opinion, roasting vegetables does not require a lot of oil.

I just preheat the oven to around 425, put the vegetables into pyrex baking dishes big enough to hold them in a single layer, and give them a quick spray of olive oil. I mean really quick–each pan gets one fast spray from side to side, but you can absolutely omit the oil if you have to. Then I put them into the oven and roast, turning them after about 7 minutes, until they’re tender (in the case of the mushrooms) or just starting to brown. 15 minutes is usually enough time. 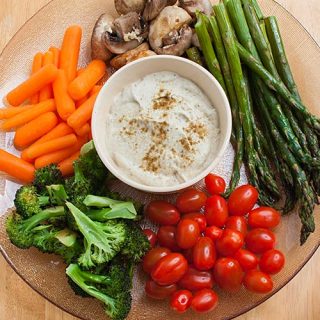 This is my standard baba ganoush recipe. I’ve experimented with other recipes and have tried fancying this one up with other ingredients, but I keep coming back to this basic formula. When I first started making it, I used 3 tablespoons of tahini, but I’ve managed to work my way down to using only about a tablespoon. If you’re a baba novice–or if you’re used to the higher-fat versions served in restaurants–you may want to try using more tahini. Also, the amount of lemon juice and garlic is adjustable to personal taste; start small and add more as you go.
Prep Time 5 minutes
Cook Time 45 minutes
Total Time 50 minutes
Servings 4
Author Susan Voisin

Course Appetizer, Side Dish
Cuisine Middle Eastern, Vegan
Keyword baba ganoush, Baba Ganoush Recipe
Have you made this recipe?Mention @SusanFFVK and tag #fatfreevegankitchen in your photos on Instagram.
Share on Facebook Share by Email