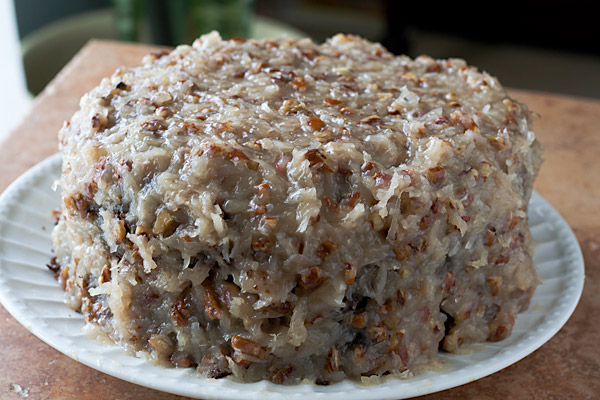 What a non-stop weekend we had! It began on Thursday, with E’s friend J. coming to stay with us for the weekend while her parents were out of town, continued Friday night with an emergency trip to the optical shop to replace E’s glasses (which the dog chewed up), followed on Saturday with an overnight trip with friends to a camp a couple of hours away, and ended Sunday with E. opening her birthday presents at home. That’s right: my “baby” is officially ten years old! Unless you have kids, it’s hard to understand how quickly those 10 years can go by. But I have to say that though I miss my baby E. a little, I really enjoy the funny, smart, and interesting person she’s becoming. 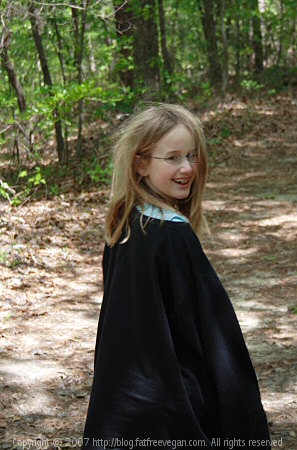 Here she is in the woods at the camp we were visiting. Though it looks as if she’s costumed for a Harry Potter movie, she was actually wearing one of my shirts because she was cold.

Since we were away most of the weekend, I made E.’s birthday cake on Friday and brought it with us to share on Saturday night. I didn’t originally intend to make a German chocolate cake, but I had problems with the new cake recipe I used, and German chocolate icing hides a multitude of sins. I can’t recommend the cake recipe, but the frosting turned out delicious, and better yet, it uses no oil or margarine. That’s not to say it’s even close to fat-free—it contains coconut milk, coconut, and pecans—but at least it avoids processed oils and the evaporated milk and eggs that traditional German chocolate recipes include. 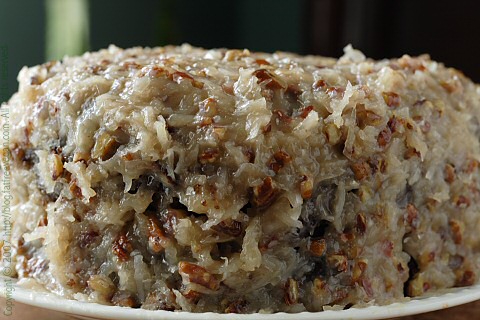 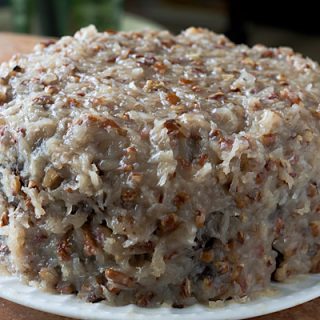 Start with a good chocolate cake recipe. I highly recommend my Crazy Cake if you’re not concerned about fat. (Hint: you can substitute half of the oil in that recipe with apple sauce.) For a healthier cake, Beet-Chocolate Cake would taste truly decadent with this frosting.
Prep Time 10 minutes
Cook Time 15 minutes
Total Time 25 minutes
Servings 10
Author Susan Voisin