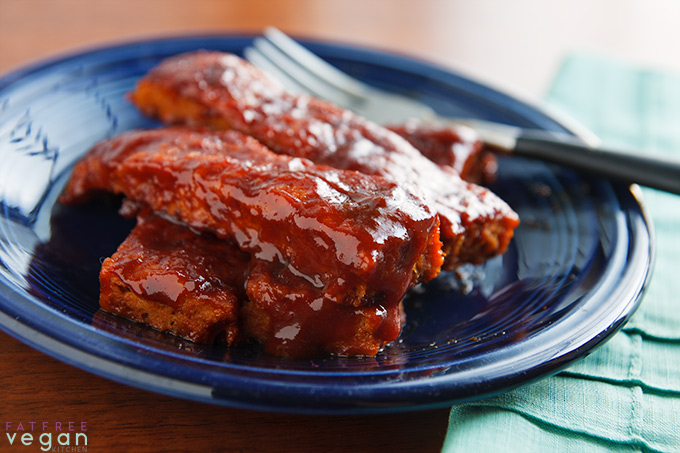 Sunday was such a beautiful day that I had to get outside, away from the kitchen and the computer, and just enjoy the sunshine and flowers. I spent all of last week closeted in my office trying to copy files and programs to a new computer and set up a new home network. By Sunday I had had enough. I wanted to spend as much of the day outside as I could.

For a few weeks I’ve been planning on cooking these barbecued seitan ribs, but the timing and weather were never quite right. Though they’re started in the kitchen, they’re finished up on the grill, giving them the smoky taste that only grilling can impart.

I’ve found that cooking outside is much less stressful if most of the foods are pre-cooked at least a little in the kitchen; long grilling times, different foods finishing at different times, and potential burning all can be avoided with a little strategic pre-cooking in the microwave or oven. 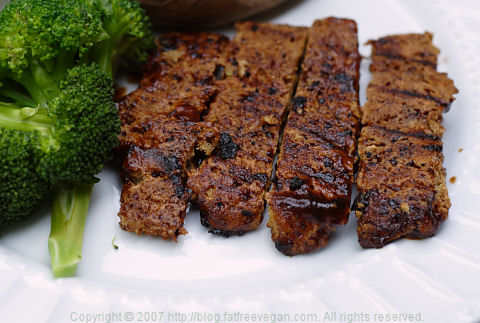 We ate these vegan ribs outside with steamed broccoli and grilled/baked potatoes. The potatoes were pre-cooked in the microwave until almost done and then cooked on the back of the grill while the seitan was cooking. The whole meal was a complete success.

The potatoes had that delicious grilled taste without the long cooking time baked potatoes usually require. And the seitan was succulent and tasty. In fact, the three of us probably could have eaten another entire pan of this stuff, so in the future I will double the recipe and hope for leftovers. E. says to tell you that this is “way, way kid-friendly.”

Note: This recipe is loosely based on this recipe, which uses the oven rather than the grill.

For a different version, try my Jacked-Up Vegan Ribs with jackfruit for texture. Yum!

Try these ribs with one of these homemade barbecue sauces or any bottled sauce. 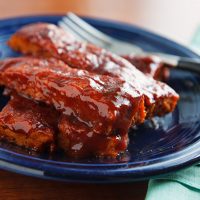 Like Veggeroni, this seitan is baked dry rather than boiled. The results are a little spongier than Veggeroni, less dense, but I think the texture is perfect for absorbing the flavor of the barbecue sauce. You’ll be amazed at how easy this recipe comes together using your favorite bottled sauce.
Prep Time 10 minutes
Cook Time 35 minutes
Total Time 45 minutes
Servings 4
Author Susan Voisin

To make this without a grill, bake it for 25 minutes without barbecue sauce. Then brush the top with a generous coating of sauce, turn the whole thing over carefully in the pan, and brush the other side with sauce. Bake for another 10-20 minutes or until the sauce has thickened and caramelized slightly but not burned. Remove from oven, cut apart, and serve. For best results when doubling the recipe, cook in two separate baking dishes. Note: Nutritional info is calculated without barbecue sauce so that you can add the figures for the brand of barbecue sauce you use. Each serving WITHOUT BBQ SAUCE counts as 3 Weight Watchers Smart points.
Nutrition Facts
Barbecued Seitan Ribz (Vegan Ribs)
Amount Per Serving (4 ribs)
Calories 196 Calories from Fat 42
% Daily Value*
Fat 4.7g7%
Sodium 186mg8%
Potassium 83.2mg2%
Carbohydrates 12.8g4%
Fiber 1.3g5%
Protein 27.7g55%
* Percent Daily Values are based on a 2000 calorie diet. 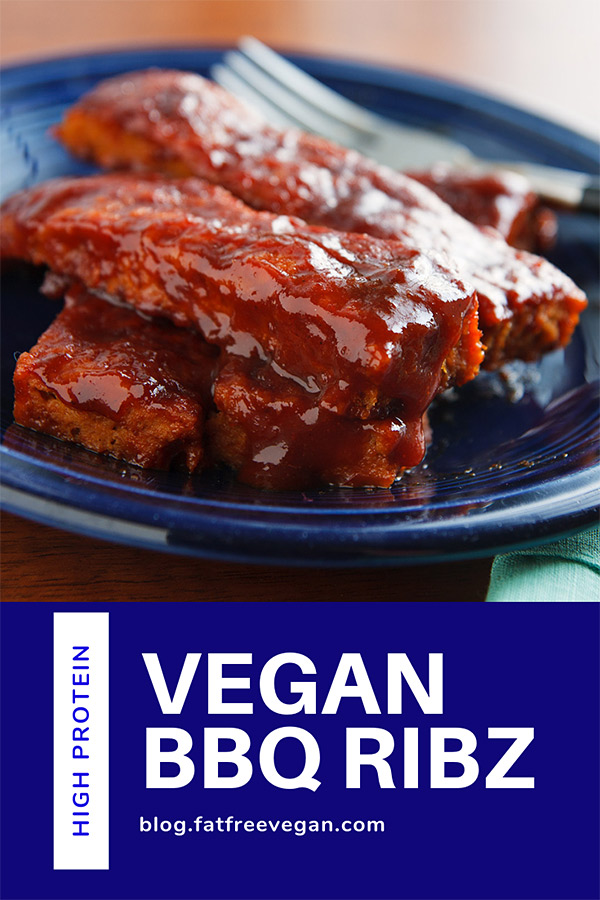 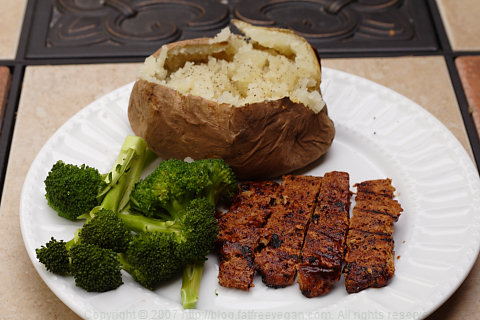