This sweet and sour seitan starts with baking your own seitan in the oven; then it’s finished in a delicious, orange-based sauce. 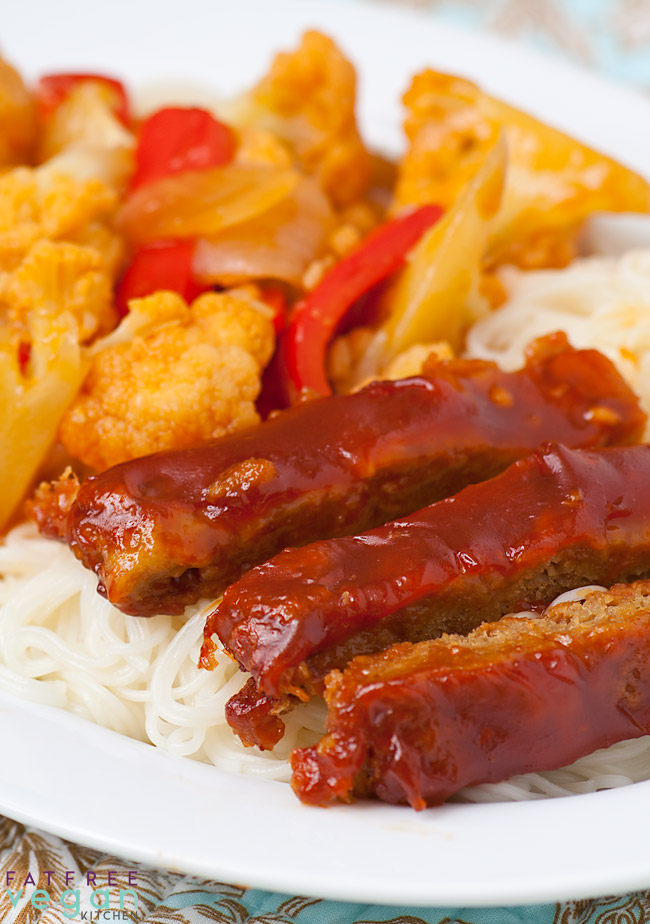 Yippee! Today is finally the last day of school! You’d think I was still in school (or teaching freshman comp) the way I get so excited. (Though to be honest, when I was teaching I was much, much happier to be finished; there are some of us who were born not to teach!)

Anyway, E. is finished with 4th grade today at noon, and the two weeks leading up to this day have been hell…for the parents! I swear, I have spent more time at the school during these last two weeks than I have at home. There have been awards ceremonies, lunch with the grandparents, performances, and recitals (she’s in an arts magnet school). And then outside of school there have been more recitals and the eye doctor, dentist and orthodontist check-ups which all seem to need to be scheduled right at the end of the school year. Right now, I’m looking forward to a little break. (And I’m taking one, but more about that in my next post.)

This all has absolutely nothing to do with today’s recipe; I’m just bubbling over with so much excitement that I can’t help sharing. No, today’s recipe stems from another kind of excitement–my newfound passion for baked seitan. 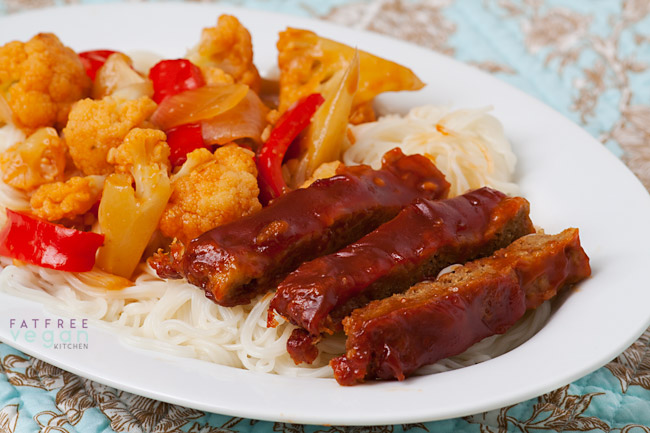 I’ve been a little obsessed with baking gluten (which is what it technically should be called, since seitan is by definition simmered in broth) ever since the Veggeroni. My success with that recipe led me to try making Ribz on the grill, and my whole family loved them so much that I knew I’d have to start working on variations of the recipe. So a couple of nights ago, with no grill at hand, I decided to rework the Ribz recipe with a sweet and sour pineapple-based sauce. I had the gluten in the oven and was ready to make the sauce when I discovered that I was all out of pineapple chunks. So I racked my brain for about 5 seconds and came up with orange juice as a substitute.

The sweet and sour seitan came out delicious, though I have to say that I like it better on the grill. (You have to be careful not to over-cook it because it can dry out along the edges.) Otherwise it and the sauce were a big hit. And once again, I should have doubled the recipe, but didn’t. The three of us devoured it in record time! 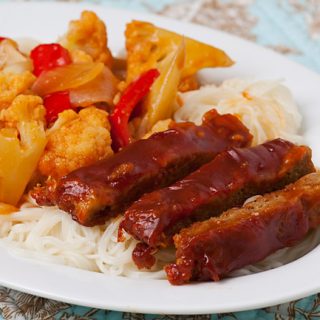 This isn’t as complicated as it appears at first glance. Get your gluten in the oven and then make your sauce and, if you want, your vegetables. By the time the seitan is done, the vegetables should be ready too.
Prep Time 15 minutes
Cook Time 40 minutes
Total Time 55 minutes
Servings 6
Author Susan Voisin

You can use the remaining sauce for dipping, or you can do as I did and use it to season some “steam-fried” veggies. Use your choice of veggies or try my “what-I-needed-to-use-up” combo: 1 large onion, cut into wedges
1 teaspoon minced garlic
1 teaspoon ginger paste
1 head cauliflower, cut into small florets
1 red bell pepper, cut into strips
1/2 recipe of Sweet and Sour Orange Sauce
vegetable broth
Heat a large, covered wok or deep skillet over medium-high heat. Add the onion, and sauté until translucent and beginning to brown. Add the garlic and ginger paste and sauté for one more minute. Add the cauliflower and about 1/4 cup of water. Cover immediately and steam for 4 minutes. Add the bell pepper and a little more water if necessary; cover and cook for about 2 more minutes, until cauliflower is tender but still crisp. Add the sauce to the vegetables and use a little vegetable broth to deglaze the pan and get all of the sauce out. Stir and cook until warm throughout, about 5 minutes. Serve over noodles or grain with seitan strips.
Nutrition Facts
Seitan Baked in Sweet and Sour Orange Sauce
Amount Per Serving (1 serving)
Calories 285 Calories from Fat 47
% Daily Value*
Fat 5.2g8%
Sodium 492mg21%
Carbohydrates 40.6g14%
Fiber 5.6g23%
Sugar 22g24%
Protein 23.1g46%
* Percent Daily Values are based on a 2000 calorie diet.