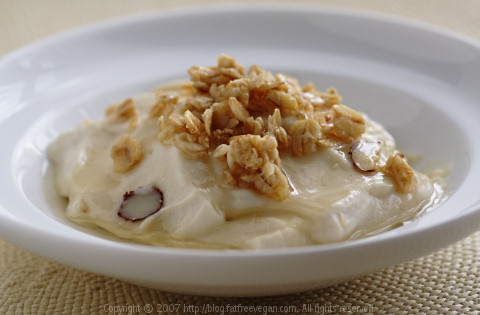 My new favorite food! Or maybe it’s an old favorite?

Ilva combines it with wine-simmered peaches. Heidi uses it to make frozen yogurt. And just about everyone is using it to make Tzatziki.

Normally I just ignore non-vegan ingredients in recipes, but lately I’ve started to notice so many mentions of Greek-style yogurt that I decided to do a little research into exactly what it is and whether there’s a vegan equivalent. What I found out was that it’s basically yogurt that has been strained. Well, excuse me, but isn’t that what we referred to in the 80’s as “yogurt cheese”? Way back in the dark ages before I became vegan, one of my favorite bagel spreads was herbed yogurt cheese. You simply took yogurt, put it into a cheesecloth-lined strainer, let it drain until it was a spreadable consistency, and then mixed it with whatever herbs and spices you liked. Of course, back then French Onion Dip was all the rage, so that’s what mine usually came out tasting like.

After doing a little more research, I’ve decided that the main difference between Greek-style yogurt and yogurt cheese is the amount of time you allow it to drain and, therefore, the thickness and dryness of the end-product. According to this site, which explains how to make Greek yogurt from scratch, you’re supposed to let it drain for about 2 hours. Another article suggests letting it drain overnight. Most recipes indicate that the amount of yogurt will be reduced by about half.

On the other hand, most recipes for making yogurt cheese, also known as labneh, specify a longer draining time, even as long as 1 to 2 days. The main objective is to let it drain until it is the consistency of a soft cream cheese, so the draining time depends a lot on the consistency of the yogurt you start with. You should wind up with one-third to one-fourth the amount of yogurt cheese as yogurt, so if you start with 3 cups of yogurt, expect around 1 cup of yogurt cheese after draining.

Armed with all of this knowledge–and a couple of “gold” coffee filters–I recently started making Greek soy yogurt. The first step is to make my own soy yogurt. As I’ve mentioned before, the only plain soy yogurt I can buy here is Whole Soy, and it’s so sweet that it might as well be the vanilla flavor. Besides tasting better, homemade soy yogurt costs less than half the price of store-bought. 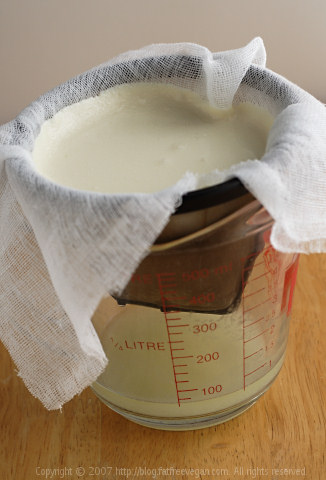 I’ve found that if I know I’ll be straining the yogurt, I can skip the step of adding a thickener, such as agar, when I make it. This speeds up the process of making soy yogurt, but the downside is that I wind up with less Greek yogurt or yogurt cheese than when I use the thickener because more water (whey) is lost. So I do recommend using a thickener, but if you’re in a hurry, you can get by without one.

After the yogurt is made and has incubated until it’s to the tartness I like (anywhere from 8 to 20 hours), I let it rest in the refrigerator for at least 4 hours. Then, I set a cone-shaped gold coffee filter in something that will hold it upright and catch the water that drains out and line it with a paper coffee filter or with two layers of cheesecloth, as shown. (If you don’t have cone-shaped filters, you can line a mesh strainer or colander with cheesecloth or even purchase a special yogurt-cheese maker.) I pour or spoon the yogurt into the filter, place it in the refrigerator, and cover the top loosely. In the photo above, I started with unthickened yogurt, so the water started draining immediately. (I took this photo about a minute after pouring the yogurt into the filter, and the whey just poured out.) If the cup that the water is draining into is not very deep, be sure to empty it into another cup from time to time. Save the whey, though; it’s full of nutrients and can be added to smoothies and soups or used to replace water in baked goods. (I’ve also watered my plants with it, but I don’t recommend that.) 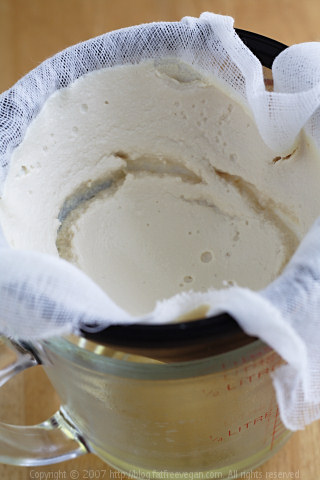 Here’s what the yogurt looks like after about 6 hours. When it reaches the consistency you like, remove it from the cheesecloth and store it in a covered container. If you want, you can press out more water by twisting it in the cheesecloth, but I find this unnecessary unless I’m making a very dry yogurt cheese. 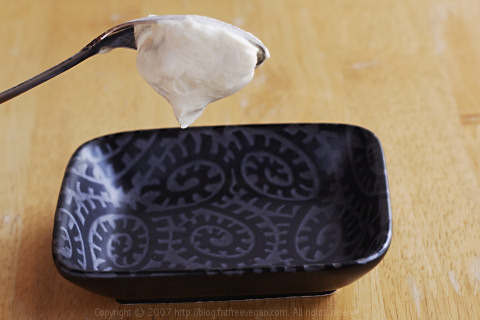 Here’s how thick the finished Greek-style yogurt is. I took photos of this spoon of yogurt for about 3 minutes, and it never once dripped off the spoon! 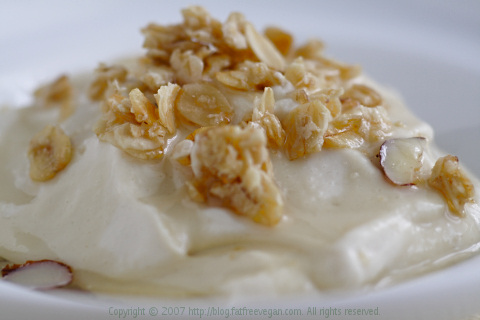 I find that Greek-style soy yogurt, besides being thicker than regular, has a slightly sweeter taste. Perhaps it’s because the flavor is more concentrated, or maybe it’s that some of the bitterness is removed with the whey. I like it plain as a low-fat spread on breads, but my current favorite use of it is to serve it with agave nectar and a sprinkling of granola, a lower-fat, vegan version of the traditional Greek dessert that uses honey and walnuts.

But it has so many more uses. Give it a try in shrikhand, an aromatic Indian dessert. Veganize this Mini Tomato Pesto Torte. I’m making a batch now that I have earmarked for a version of these delicious-sounding stuffed mushrooms. You can even fry it or fill crepes with it. In its thickest form it works as a replacement for cream cheese and in its thinner form it can replace sour cream in almost any recipe (I’m planning on making a cheesecake with it soon). The possibilities are endless, so get straining!