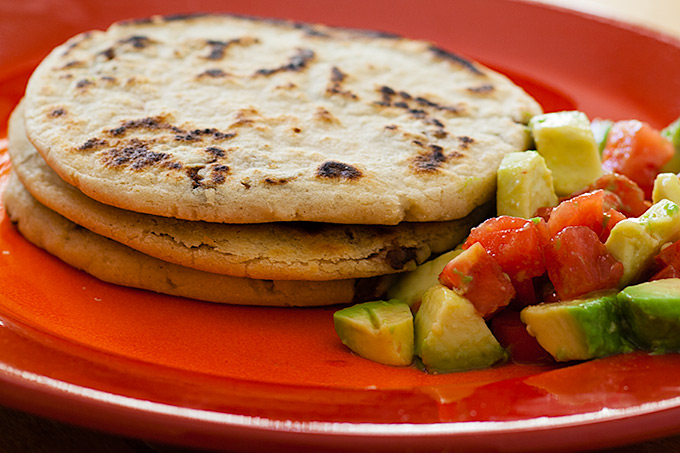 Though a vegan can often be seen
Eating lentils and tofu and beans,
Still when omnivores pass
They invariably ask
“How do you get your protein?”*

Yesterday, Isa, the post-punk goddess of Vegan with a Vengeance, held a vegan limerick contest on her blog with the prize being a signed copy of her new book Veganomicon. I didn’t find out about it until just before it ended, and then I had a brain freeze and couldn’t think of anything to write. When I woke up this morning, the lines above just popped into my head, and perhaps they should have stayed there, but like a song that you can’t get out of your mind until you sing it out loud, I hoped that by posting my poor limerick here I could stop thinking in anapestic trimeter.

So what does this have to do with black bean pupusas? Not much, except for the fact that limericks are usually a little naughty and the word “pupusa” always sounds dirty, at least to my American ears. I actually tried to write a limerick about pupusas and got this far:

No, “Susan” doesn’t really rhyme with “pupusa,” but it was as close as I could get without using “fuchsia,” which now that I think of it looks dirty, too. (You wouldn’t know it from reading this blog but I have a dirty mind and a potty mouth, especially when I trip over a toy or read the letters to the editor in our local newspaper. But I struggle mightily to keep this blog G-rated so that someday my daughter will read it and realize that my vocabulary at one time extended beyond “No you can’t have a cell phone” and “Who the **** left that skateboard in the hallway!”)

Anyway (and yes, there really is an anyway, though I’m tempted to write the bulk of today’s post in parentheses, just because), I’ve been interested in pupusas since the first time I saw them mentioned very casually on some vegan message board, as though everyone knew what they were. Since I’m not from El Salvador, where they originated, or California, where they are popular in some areas, I’ve never seen a pupusa, which as it turns out is simply a stuffed tortilla, sort of like a quesadilla, but with the filling completely enclosed. I’ve been meaning to make them for months, and I finally got a chance last night. 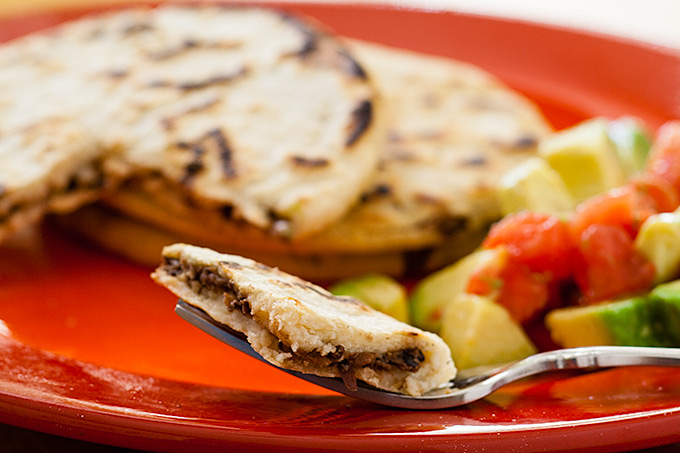 I adapted this recipe from Myra Kornfeld’s The Healthy Hedonist, and I have to say that I can’t recommend the recipe as it’s written in that book. It called for 5 cups of masa harina and 2 1/2 cups water, but that is way too little water for the amount of masa flour. I had to add more water just to get the mixture to form a dough, and later, when I checked a few recipes online, I realized that they all used even more water than I had.

The recipe also called for using warm water and kneading the dough for 2 minutes, and since none of the other recipes I’ve looked at do those things, I can’t say for sure whether they are necessary or not. Next time I might try another recipe for the dough, such as this one, just to see how it comes out, though I do prefer the following technique for forming the pupusas.

Despite the difficulty figuring out how much water to use, I think the pupusas came out great, especially after I got the hang of forming them and patting them out thin enough. The black bean filling was really delicious, though I didn’t have quite enough to fill all the pupusas, so I had to make one plain, unfilled tortilla. Next time, I plan to fill some of them with “cheeze” in addition to black beans. 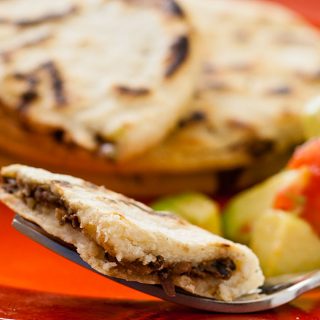 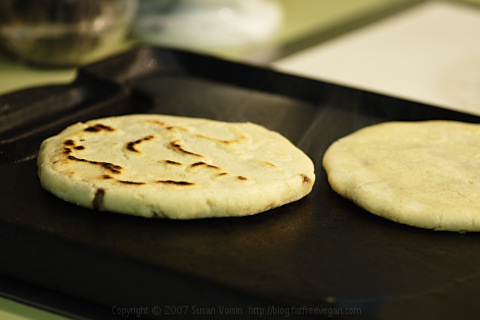 I served these in two different ways. The first time I made a coleslaw recipe similar to the traditional Salvadorian pupusa accompaniment, curtido. Unfortunately, it was all eaten up before I took photos, so the second time I served them, I made an impromptu avocado salad (avocado, tomato, salt, pepper, lime juice, chipotle chili powder). I liked both the coleslaw and the avocado salad, but I’d have to say that D and I preferred the pupusas topped with the salad, along with some spicy salsa.

*PS–The answer to “How do you get your protein?” is “From FOOD!” 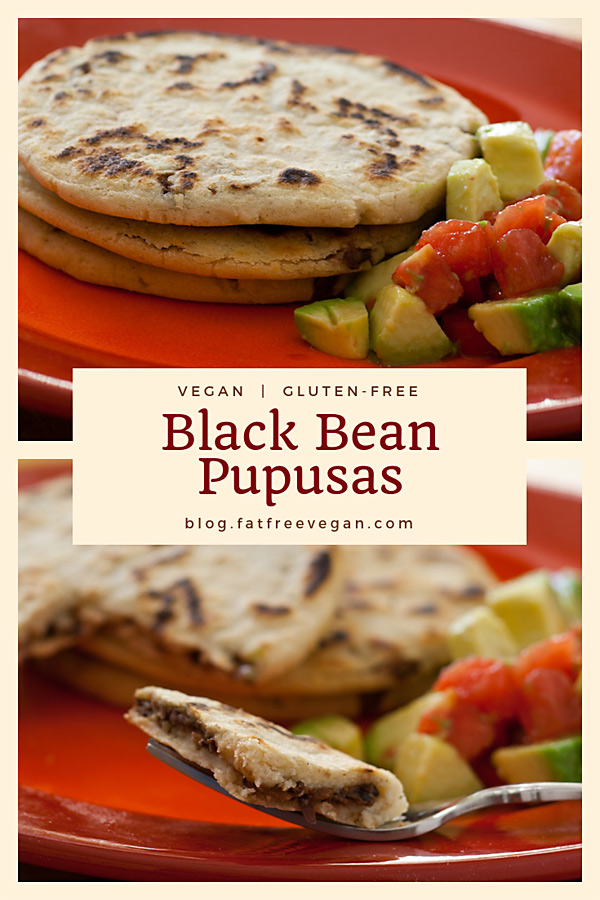