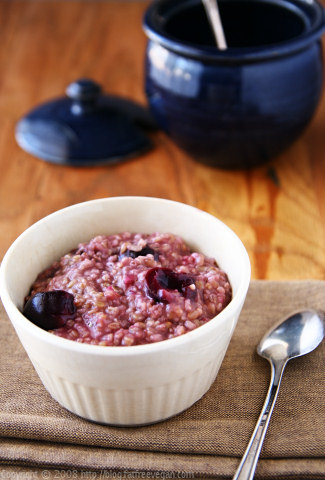 Call me a late bloomer. I must be the last vegan to jump on the steel-cut oats bandwagon, but now that I’m on, I’m not planning to get off.

I’ve known about steel-cut oats for years, even tried them at least once, but they never made a big impression on me for a couple of reasons: 1) I thought they took too long to cook, and 2) I was afraid that eating something so starchy would cause me to be hungry later. As it turns out, I was wrong on both counts.

Actually, I wasn’t wrong about steel-cut oats taking longer to cook than rolled oats. They do. But I realized that it just doesn’t matter: I’m not an early morning eater, I work at home, and I can let the oats simmer on the stove while I do other things. I’m in no rush. In the past, before I made a resolution to eat breakfast regularly, I considered steel-cut oatmeal as an breakfast option for my husband and daughter and decided that unless I made it the night before (or started it the night before in a crockpot or thermos) there was no way to work it into the hectic 15 minutes my family has for breakfast on weekdays. But now that I’m thinking of my own breakfasts, I can manage long-cooking oats just fine.

Which leads to my second objection, which I’ve found was totally unfounded. In the past, I’ve had trouble with carb-heavy breakfast foods leaving me hungry later in the morning. As a result, I started looking for protein-rich vegan breakfast ideas and came up with several tofu-based recipes, including Vegan Omelette for One and Mini Crustless Tofu Quiches. But since I’ve started having steel-cut oats for breakfast, I’ve found that not only don’t I get hungry later in the morning, I also seem less hungry throughout the day. I’m snacking less between lunch and dinner–often not snacking at all–without even making an effort. 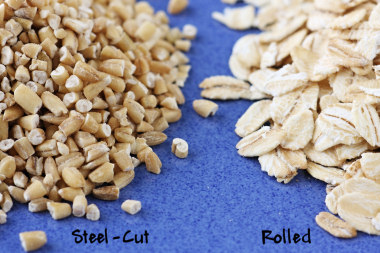 For those of you who are unfamiliar with them, steel-cut oats (also know as pinhead oats, Scotch oats, or Irish oats) are the inner parts of the oat kernel (or groats) that have been cut into two or three pieces. They’re much less processed than rolled oats (a.k.a. old-fashioned oatmeal), which have been steamed, flattened with a roller, re-steamed, and toasted. Quick-cooking and instant oats have been processed even further; though both are technically a whole grain because they contain all of the bran, germ, and endosperm of whole oats, they are digested more quickly than steel-cut and rolled oats. Also, instant oats tend to be packaged with salt and sugar, making them a very processed food.

Beyond the nutritional advantages, I really enjoy the slightly nutty flavor of steel-cut oats, as well as their chewier texture. I’ve been playing around with different ways of cooking them, varying the flavor with different fresh and frozen fruits and spices. I still have a lot of experimenting to do, but so far, these are my two favorite combinations. 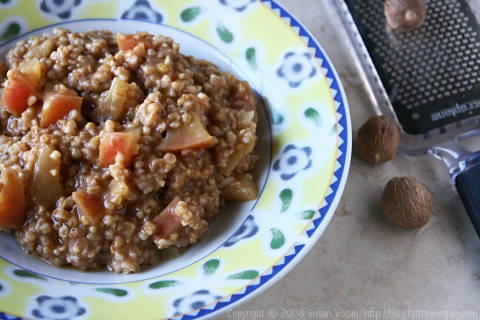 I like to make enough for two breakfasts and save half for another day. 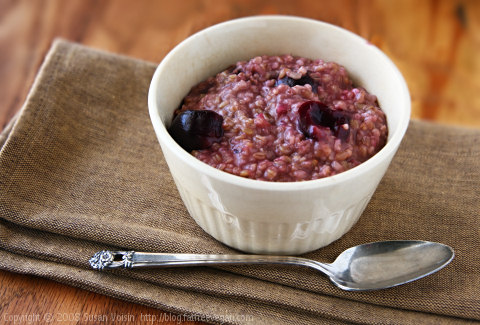 These are so good that I have to be careful not to eat the whole batch at once!

For more great oatmeal recipes, check out these blogs (veganize as necessary):