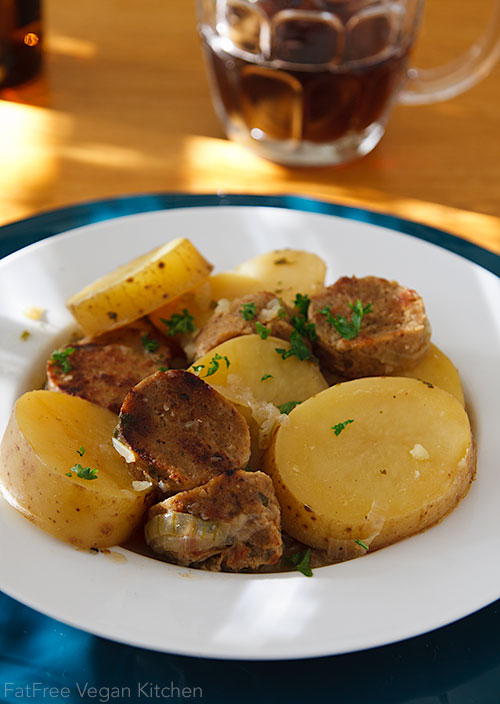 Creating a unique vegan St. Patrick’s Day recipe isn’t easy when you’ve never been to Ireland and have no idea how authentic any of the dishes that we Americans think of as Irish actually are. I set out looking for something different from the Corned “Beef” and Cabbage I’d made last year, something that hadn’t already been made vegan a dozen times before like Colcannon, and finally settled on Bangers and Mash, a favorite in Irish pubs in the United States.

And then I saw this: “An Irish Sausage is not a Banger.” According to this Irishman, sausages are called bangers in England, but not in Ireland (though I wonder if in these multicultural times the term hasn’t been adopted in at least some parts of Ireland).

So, it turns out that Bangers and Mash is not an Irish dish, and I really, really wanted an authentic Irish dish for the occasion. I already had my taste buds set on using Julie Hasson’s brilliant steamed sausages technique to make Irish Sausages (as I now knew they should properly be called), so I started looking for other recipes in which to use them and stumbled upon Coddle (it was actually mentioned in the article that disillusioned me about bangers, so I had to check it out). This simple stew looked like the perfect vehicle for my vegan sausages. 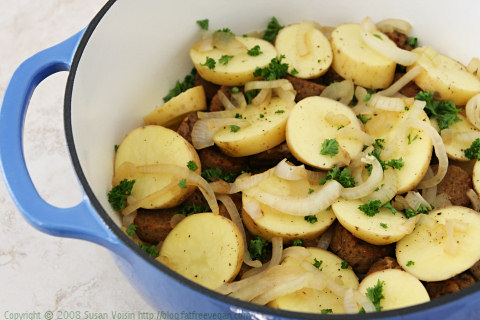 Coddle contains a few standard ingredients–sausage, potatoes, onions, parsley, and bacon. Making vegan Dublin coddle just meant substituting vegan sausage for pork and leaving out the bacon, though to make up for the bacon flavor, I added a little Liquid Smoke to the broth. The coddle is then slow-cooked (or “coddled”) until the vegetables are tender; adding dark beer near the end increases the authenticity of the dish and deepens the flavor. (Guinness, which formerly wasn’t vegan, now has several vegan options; check here to see which ones are vegan.) 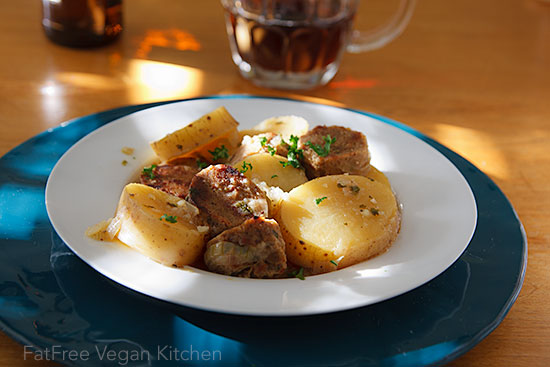 It’s simple, yes, but absolutely delicious–hot and filling and the very definition of “comfort food.” 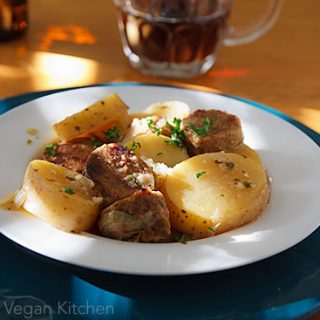 This could easily be cooked in a slow cooker; for best results, double the recipe for large crockpots and cook on low for 6-8 hours. Nutritional info below includes beer. Calorie count will be lower if it is omitted.
Nutrition Facts
Dublin Coddle with Vegan Irish Sausage
Amount Per Serving (1 serving)
Calories 311 Calories from Fat 36
% Daily Value*
Fat 4g6%
Sodium 591mg26%
Carbohydrates 44g15%
Fiber 5g21%
Protein 25g50%
* Percent Daily Values are based on a 2000 calorie diet.

If you haven’t tried it yet, you have to make a batch of Julie’s Spicy Italian Vegetarian Sausages. The recipe is wonderful in its simplicity and its consistently delicious results. You can see for yourself how easy it is by watching Julie’s video. 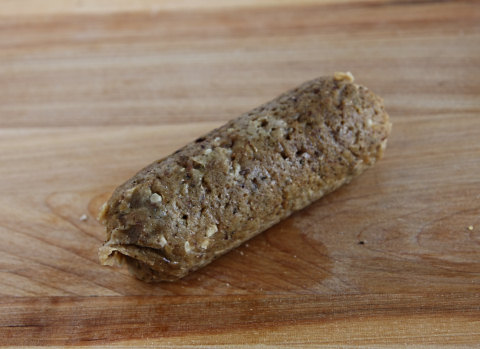 Since Irish sausages are mild and sweet, not spicy or smoky, for my Irish variation I completely changed the spices to reflect traditional Irish sausage recipes. Marjoram, ginger, and nutmeg are standard, but since gluten doesn’t have any flavor of its own, I needed to add a few non-traditional seasonings–sage and thyme–to build up a flavor base.

Irish sausages typically contain bread crumbs as a binding agent, so I added some to mine, making them moister and a little less firm than Julie’s original recipe (a good thing, in my opinion, though how firm you like your sausage is a matter of personal taste!) They turned out the texture and color of cooked Gimme Lean, and I think they’d make a nice breakfast sausage, perhaps with just a touch of smoked paprika or Liquid Smoke. 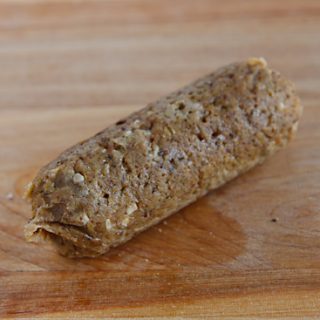 Don’t let the long list of ingredients scare you; most of them are spices that give these sausages their distinctive flavor.
Prep Time 30 minutes
Cook Time 35 minutes
Total Time 1 hour 5 minutes
Servings 5
Author Susan Voisin

In this recipe I used one cube of Edward & Sons’ Not-Beef Bouillon; it’s vegan, and one cube flavors 2 cups of liquid. Since I wanted the flavor to be a little stronger than normal bouillon, I used double the amount, so if you’re using another kind of bouillon or broth powder, I recommend using enough to flavor two cups of water.
Nutrition Facts
Irish Fauxsages (Vegan Irish Sausages)
Amount Per Serving (1 sausage)
Calories 157 Calories from Fat 36
% Daily Value*
Fat 4g6%
Sodium 614mg27%
Carbohydrates 10g3%
Fiber 2g8%
Protein 22g44%
* Percent Daily Values are based on a 2000 calorie diet.