Seitan Scaloppine is thin seitan (wheat gluten) cutlets smothered in a sauce of lemon and green olives. Low-fat, vegan, and full of protein. 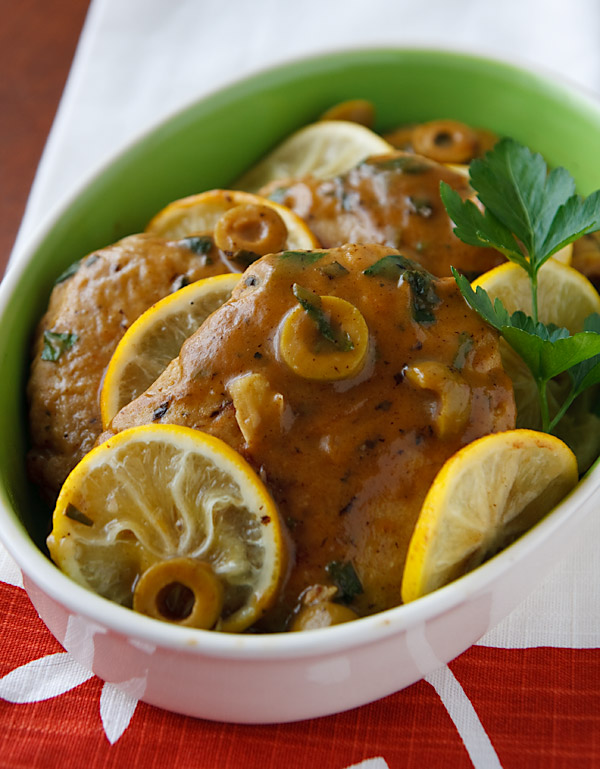 People sometimes ask me if I miss meat. I don’t. After being a vegetarian for almost 21 years, I don’t find the look or smell of meat appealing in the least. What I do miss, a little, are some of the creative ways of cooking a big ol’ slice of something in sauce.

Often I’ll use slices of tofu or eggplant in such recipes, but when I really want a “toothier” texture, I turn to wheat gluten. It’s a processed food, I know, and it causes problems for lots of people, but my family and I seem to suffer no ill effects from eating it, so I like to experiment with it from time to time. I apologize to all my gluten-free readers for not having a gluten-free version of this recipe, but if you’re willing to experiment, I think the sauce would be delicious over bean-based burgers, tempeh, or tofu.

“Scaloppine” is a term for meat that is sliced or pounded very thin. Since I used wheat gluten, I didn’t slice or pound anything, but I did flatten the seitan as much as possible before cooking it. The result is a cutlet that is chewy without being rubbery, but I thought my first results were a little dry. I was all set to post the recipe when I decided to do a couple of experiments to find out if I could make the seitan a little moister and more tender. Yes, I could! Check the notes after the recipe for two tricks I discovered. 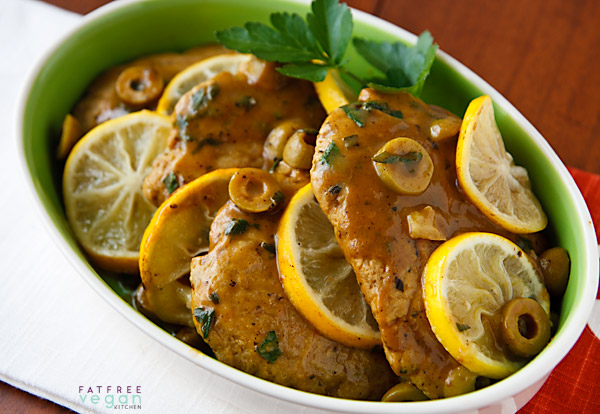 A few words about the recipe: 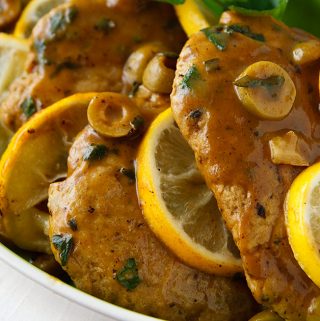 Don’t be scared off by the number of ingredients or instructions. The scaloppine themselves are super-easy to make and take only about 35 minutes. You can make them ahead of time and store them in the fridge until you’re ready to put them together with the sauce.
Prep Time 25 minutes
Cook Time 45 minutes
Total Time 1 hour 10 minutes
Servings 4
Author Susan Voisin

I found two different tricks that resulted in a cutlet that was a little moister. Unfortunately, one of them requires an extra step, simmering the seitan in broth for a few minutes after it comes out of the steamer. If you’d like to do this, just put the cutlets in a skillet, add broth to about halfway over them, and simmer, turning, for 3-5 minutes. The cutlets will absorb a lot of the broth, so be ready to add more as necessary. Once they’re done, remove them from the broth and proceed with the recipe.

No extra step is required for the other technique; in fact, it’s simpler than the original recipe, though you will need a large steamer and plates that will fit inside it. Instead of wrapping the cutlets in foil, place them on the largest plate that will fit in your steamer. (If you have a double-level steamer, you can place two cutlets on smaller plates on each level.) Cover with an inverted plate of the same size, to keep water from dripping directly onto your cutlets. Steam for 25 minutes. Your cutlets will be a little lighter in color but will have a moister texture. This is my preferred way of making these cutlets! Nutrition info below includes sauce and flour. Each cutlet alone, with no sauce or flour coating, provides 181 Calories (kcal); 5g Total Fat; (25% calories from fat); 27g Protein; 9g Carbohydrate; 0mg Cholesterol; 369mg Sodium; 2g Fiber. 3 Weight Watchers Freestyle points.
Nutrition Facts
Seitan Scaloppine with Lemon-Olive Sauce
Amount Per Serving (1 serving)
Calories 215 Calories from Fat 63
% Daily Value*
Fat 7g11%
Sodium 581mg25%
Carbohydrates 14g5%
Fiber 2g8%
Protein 28g56%
* Percent Daily Values are based on a 2000 calorie diet.