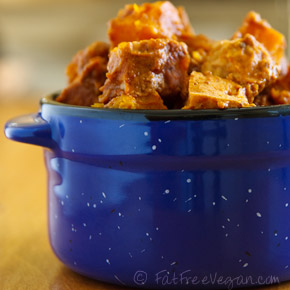 “It’s spicy and sweet and peanutty all at the same time.” From some people, including me, that would be a hearty endorsement, but those were the words my daughter used to express her dislike for this dish. “It’s just weird,” she continued, handing her plate to her father to finish. “It’s complex,” I countered, but she wasn’t buying it. To a pre-teen, “weird” is the kiss of death.

But let me assure you, this rich, complex dish is delicious, to us adults at least. In fact, D and I ate far more of it than we should have. I have a hard time resisting anything in peanut sauce, and having been tantalized by the heady aroma coming from the crockpot all afternoon, I was ready to fight D for E’s share of the meal. Unfortunately, at 14 grams of fat for 1 serving, it hardly qualifies as diet food or, needless to say, anything close to fat-free. So it’s going on my For Company Only list because I can’t be trusted around it.

I made it this time with what I had in the house: tempeh, frozen tofu, and half of a butternut squash. You can use all or any one of those ingredients or make it with another meat substitute such as seitan, TVP, or sweet potatoes, but I think that frozen tofu tastes best because it absorbs the sauce and has a pleasingly chewy texture. Whatever main ingredient(s) you use, you need to aim for between 2 and 3 pounds in total. And while I liked the taste of the winter squash, I think it was the source of the sweet flavor that E found objectionable, so if you’re opposed to sweet-spicy combinations, you might want to bear that in mind.

I cooked this in the slow cooker, but I found that even on low, it was ready in a little over 3 hours. It could be that my crockpot runs hot, but I hesitate to recommend that you leave it cooking for more than 4 hours. If you need to, then add a little water to the sauce, perhaps 1/2 cup, just to make sure that it doesn’t get too dry. If you’d like to cook it on the stove, cover it tightly and cook on the lowest setting until the sauce is thick, probably at least an hour. 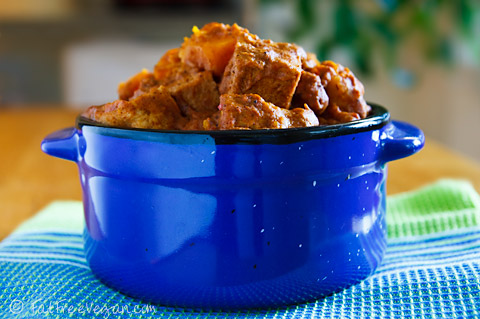 Freezing tofu completely changes its texture, making it chewy and spongy. Be sure to freeze it for at least 24 hours and squeeze out as much water as possible before cooking so that the sauce will permeate it. Tofu can be stored in the freezer for months in its original package and then defrosted in the refrigerator or microwave before using.

(Sauce adapted from a chicken recipe in The Gourmet Slow Cooker.)