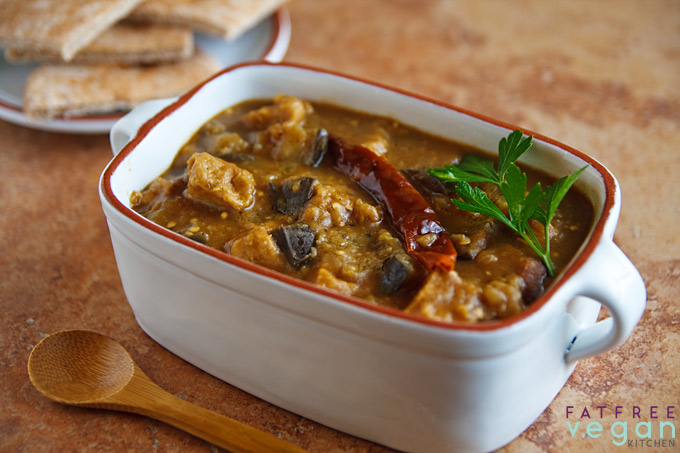 I first made this stew a week ago, when I was looking for something to do with the small Thai Eggplants that were going to waste in my refrigerator. Aromatic and warmly spiced, this Iraqi stew was so delectable that I was actually happy that I was going to have to make the whole meal again.

You see, I had timing issues. I expected the yellow split peas that had been aging in my freezer for, well, ages to behave like fresher peas, and as a result, the stew I imagined taking two hours to cook took over three. And because I had thrown in the eggplant during hour one, it had completely dissolved and become unrecognizable by the time we ate the stew.

It was still delicious, and to be honest, disintegrated eggplant is a plus when you’re feeding an eggplant-hating child (in other words, she didn’t know it was there.) But I wanted to get the timing right and perhaps have tender cubes of eggplant, so less than a week later, I was back in the kitchen making this dish again.

You’ll notice when you read the instructions that I don’t give a specific cooking time for the split peas; that’s because the cooking time varies depending on how old your split peas are, the hardness of your water, and (I think, though I have no proof of this) your elevation. The peas need to be falling-apart soft before you add the other ingredients because they form a sauce around the eggplant and seitan. If your peas are as old as mine, you just need to cook the heck out of them first. I used a pressure cooker, so my second go-round with this recipe took a lot less time. 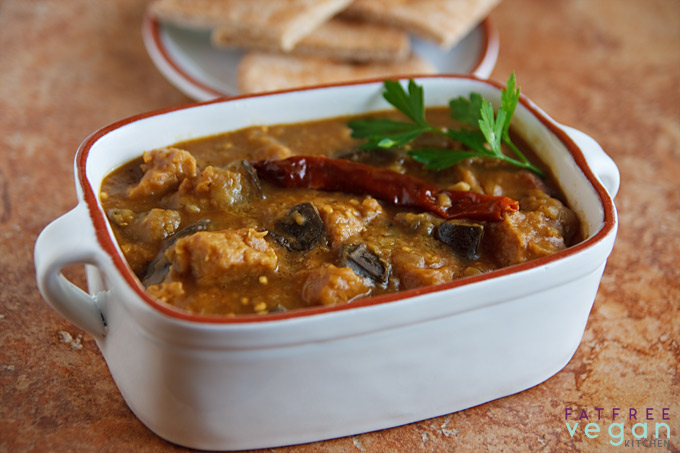 While I was redoing the recipe, I also decided to tinker with the seitan that goes into it. Previously, I had baked the seitan before tossing it into the stew. This time around, I tried adding the seitan raw to save a step and to see what the resulting texture would be. I’m happy to report that cooking the seitan in the stew worked beautifully; it became more tender and “meaty” than the pre-baked seitan. Which way is better is a matter of taste: I liked the tenderness of the unbaked seitan, while my husband slightly preferred the chewiness of the baked. I’ll leave the choice up to you.

And while I’m talking about seitan, I apologize to my gluten-free readers. I think you still may be able to enjoy this stew with, perhaps, chickpeas or another bean standing in for the seitan. Or maybe you can add an extra half cup of split peas and cook them just until al dente before adding the eggplant. If you try it, please let me know your results.

I know the recipe seems like a lot of work, but I think it is worth it for this unusual and delicious dish. If you really want to cut time, though, consider using a pound of packaged seitan instead of homemade. 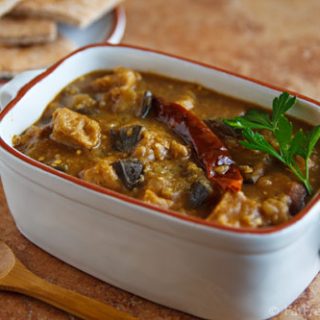 The seasoning in this dish is inspired by Baharat, a spice blend used in the Middle East. You may be able to buy jars of Baharat in Middle Eastern grocery stores; to substitute it for the seasonings in this recipe, start with 2 teaspoons and add it to taste, but be aware that packaged Baharat may be spicier than my seasoning mix.
Prep Time 30 minutes
Cook Time 1 hour 10 minutes
Total Time 1 hour 40 minutes
Servings 6
Author Susan Voisin

Seasoning Blend (mix all together)

Cooking the gluten in the stew results in a tender seitan. If you’d like a firmer, more chewy seitan, flatten your gluten and bake it at 400F for 20 minutes before cutting into cubes; add it to the stew with the eggplant. Pre-baked seitan will be spongier and look less like m*e*a*t.
Nutrition Facts
Iraqi-Inspired Seitan and Eggplant Stew
Amount Per Serving (1 serving)
Calories 270 Calories from Fat 24
% Daily Value*
Fat 2.7g4%
Sodium 607mg26%
Carbohydrates 38g13%
Fiber 13g54%
Sugar 8g9%
Protein 21g42%
* Percent Daily Values are based on a 2000 calorie diet.