There are blueberries in this chocolate blueberry cake, a dark, delicious, dense, and almost brownie-like dessert. 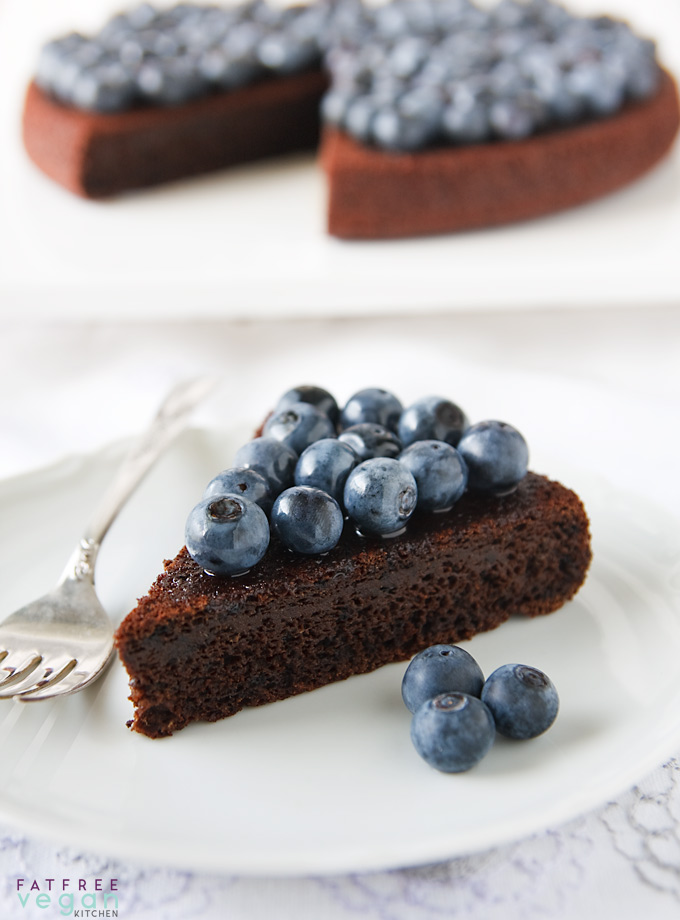 There’s something peaceful about picking blueberries, even when you have to stand on a ladder to do it.  If you get up early enough, before the sun has a chance to set itself on Broil and the air still has a hint of morning cool, you can enjoy the bird songs as you hunt for the elusive “bigger berries” among the top branches of a 15-foot-tall bush/tree.

For about 15 minutes.  Then the realization sets in that the berries haven’t even reached the 1-quart line in your gallon bucket, the shady sides of the bushes have the fewest berries, and that bird whose nest you’re picking around sounds mad, really mad.

Still, picking berries is something E and I look forward to every summer, more so this year because we missed last summer after our favorite pick-your-own farm went out of business.  So when a friend recommended another orchard, smaller but with a friendly owner who trusts people to leave the $6 per gallon charge under a bucket while he takes a breakfast break, we made plans to get up early and get out there the next day, bringing our house guest, E’s friend G, along with us for an extra set of picking hands. 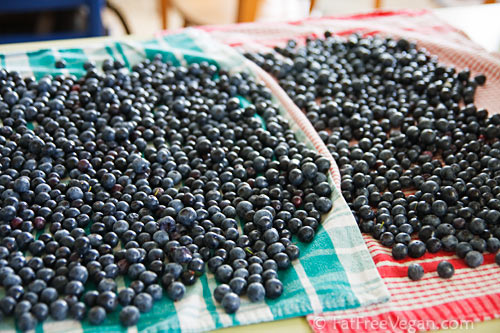 We managed to pick a gallon apiece, which seemed a good idea until I got home with 3 gallons of blueberries and nothing to do with them.  I decided to freeze two-thirds of them, so as soon as I got them home, I laid six kitchen towels out on my counters and kitchen table, spread out the berries, and started picking through them to remove stems, leaves, crushed berries, and the occasional spider.

The berries were damp with morning dew and condensation, so I left them out on the counter to dry completely.  After a couple of hours of drying, I pulled up the edges of the towels and funneled the berries into gallon-sized freezer bags and popped them into the freezer.  I did not wash the berries, which would have made them wetter, so we’ll have to wash them as we use them.

That still left a gallon of berries to eat up, so we started off by having blueberry pancakes for dinner, and for lunch the next day, I made blueberry vinaigrette for my salad.  But neither of those meals put a dent in the shelf full of berries in my fridge.  The girls were clamoring for a blueberry dessert, and I vaguely remembered a recipe I’d seen in Better Homes and Gardens that used blueberries in a chocolate cake.  A quick internet search found it, Whole Wheat Chocolate-Blueberry Cake, the winner of BHG’s Annual Recipe Challenge. 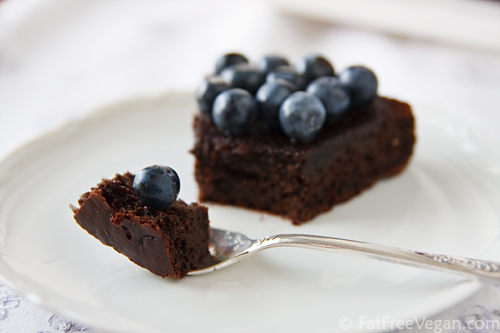 The photo was beautiful, and the idea of blueberries in chocolate cake batter was intriguing, but the recipe wasn’t vegan because of its use of egg and light whipped dessert topping nor was it fat-free because of the semisweet chocolate.  So I used the basic idea for the cake and omitted the delicious-looking chocolate topping in favor of simple blueberries with a swirl of agave nectar.  I also cut the sugar in half and used a new-to-me sweetener, organic date syrup, which really helped amplify the chocolate taste.

The cake turned out dark, delicious, dense, and almost brownie-like; the predominant flavor is chocolate, the blueberry flavor coming mainly from the berries on top.  Because it’s less sweet than most chocolate cakes, I considered it more of an “adult” dessert and worried that the kids wouldn’t like it, but both girls devoured their pieces and then demanded seconds. 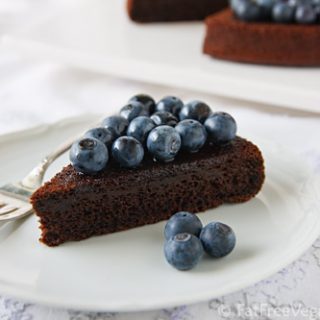