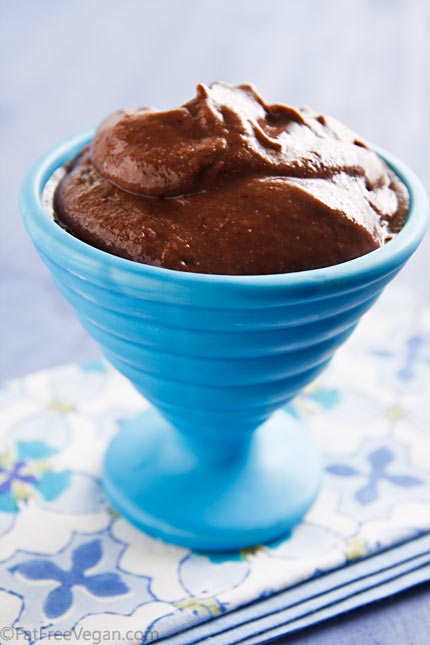 Warmer weather has arrived, bringing with it my craving for ice cream, which seems to go into remission over the winter but comes back with a vengeance when the temp goes over 80. I don’t own an ice cream maker, and I when I get near the vegan ice cream section of the grocery store, I look the other way, so when the craving for a decadent frozen treat hits, I have only one recourse: Pull out the frozen fruit and get to blending!

My daughter E says I’ve become “too weird” lately because I’ve been putting greens into my frozen desserts. I like the idea of getting a little extra nutrition in my daily dose of decadence, but I leave the spinach out when E’s partaking because she says she doesn’t believe in blended vegetables. (My rejoinder, “I don’t believe in the Easter Bunny, but you still get a basket of candy every year,” doesn’t impress her.) Honestly, if she would just give it a try, she would never notice the spinach in this chocolate-cherry treat. Kale is another story, though, and something I recommend only to hard-core veterans of blended greens.

I make this using my beloved Vitamix, though a food processor will work with a lot of starting and stopping and scraping down the sides. I’m not sure how well a food processor will handle spinach, however, so you might be wise to stick to all fruit in the processor or your Ice Cream may actually be Ice Green. 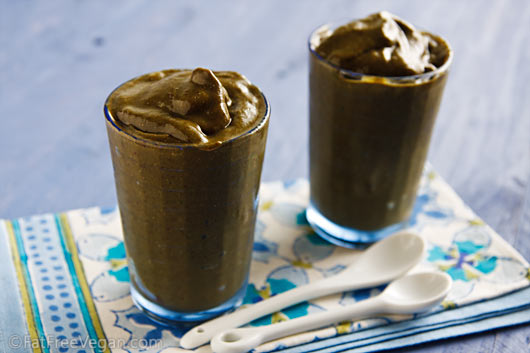 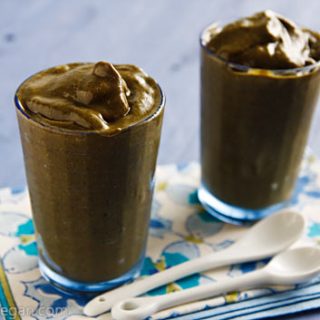 If you’re used to greens in your sweets, you can use kale leaves (ribs removed) instead of spinach, but if this is the first time you’ve added greens to a dessert, stick to spinach–you won’t know it’s there.
Prep Time 5 minutes
Cook Time 1 minute
Total Time 6 minutes
Servings 2
Author Susan Voisin

This soft-serve dessert tastes best made fresh, but if you have to, you can freeze any leftovers. Allow to thaw slightly before stirring and serving (a few seconds in the microwave will speed this up.) I don’t recommend dividing the recipe in half or doubling it because it becomes difficult to blend. Nutritional information uses unsweetened plain soy milk that contains 45 calories and 2.25 grams of fat per half cup; other non-dairy milks may have more or less of all nutrients.
Nutrition Facts
Chocolate-Cherry Ice Dream
Amount Per Serving (1 serving)
Calories 203 Calories from Fat 30
% Daily Value*
Fat 3.3g5%
Sodium 33.1mg1%
Carbohydrates 43.6g15%
Fiber 8.7g36%
Sugar 27.4g30%
Protein 6.5g13%
* Percent Daily Values are based on a 2000 calorie diet.

Disclosure: Amazon links are to products I actually use. When you buy something through them, a few pennies on each dollar goes to support my work on this site.