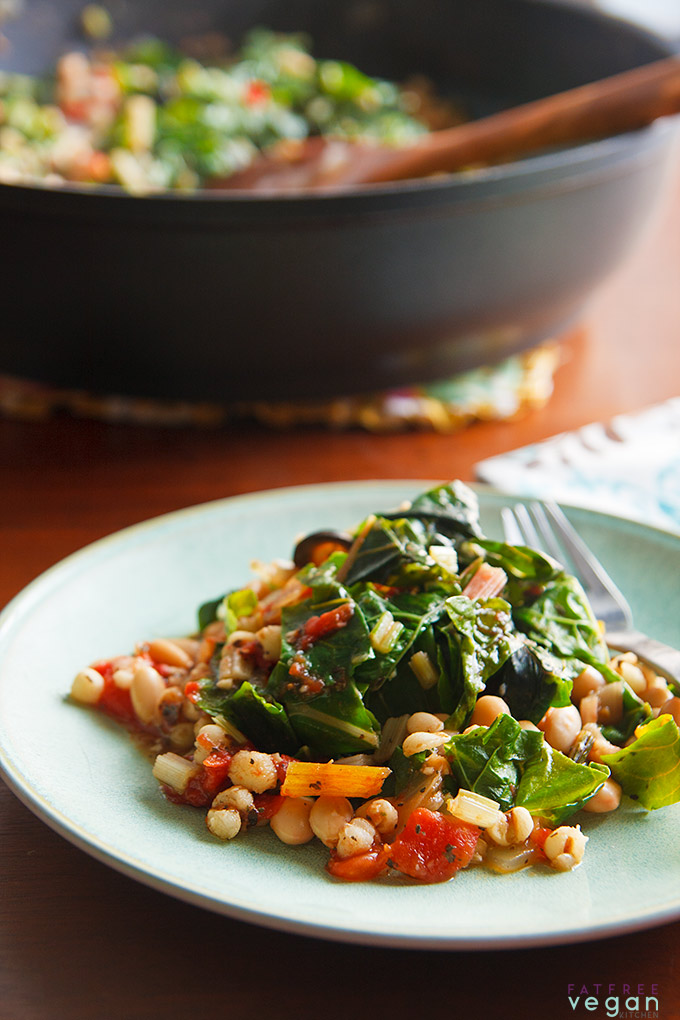 I first went in search of Job’s tears a couple of years ago when a reader recommended it as a gluten-free replacement for barley. After striking out at the local natural foods store, I thought for sure I’d be able to buy some on the internet, but a Google shopping search pointed me to a page full of rosary beads and skin whitening cosmetics. Clearly, the elusive Job’s tears had other uses than just as a simple grain.

I finally stumbled upon a bag of hato mugi, the Japanese name for Job’s tears, quite by accident in a Korean grocery store. I bought a bag, brought it home, and stuck it in my freezer (which is where I keep my grains since an Invasion of the Pantry Moths a few years ago).

There were no general directions in English on the package, just a recipe for making it into porridge, which isn’t what I wanted to do, so I left it to age gently in the freezer while I did some research on cooking time and water to grain ratio and anything else I needed to know. And like my Google shopping search, I once again found nothing relevant.

So I did what anyone else would do: I just guessed. I put a half cup of the grain into a pot with 2 cups of water and cooked it until it was soft, about an hour. Then I drained it and threw it into the dish I was making for dinner. 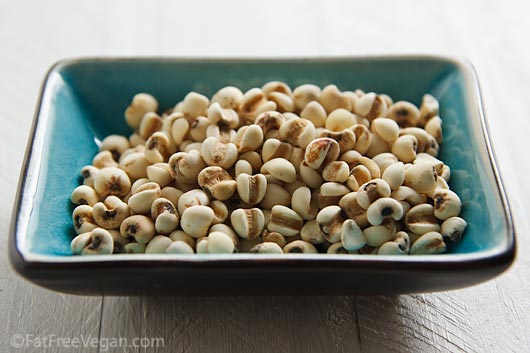 And it was good. The cooked Job’s tears had a lightly chewy texture and a flavor that’s hard to describe; it reminded me most of hominy, though the cooked grains were about half the size.

Only after I’d cooked it did it occur to me to consult the one reference book I own that was sure to have some info, Rebecca Wood’s The Splendid Grain, where I found out that the Job’s tears I had bought were the less desirable polished form of the grain. I also found out why my first search had yielded rosary beads:

Job’s tears (Coix lacryma-jobi) is a tall grass that has been cultivated in Africa and Asia for centuries. Its name comes from the shape of the unhulled grain, which suggests a teardrop, an ebony-color teardrop. Throughout the world, rosary beans and other prayer beads are made from unhulled Job’s tears. The grain is also used to make attractive, durable, and inexpensive necklaces.

Wood goes on to say that Job’s tears, one of the few nonhybridized grains available today, has to be imported because it doesn’t grow in North America. Unpolished, it has a reddish-brown color, but when hulled and polished, it looks a little like pearl barley with a deep groove down one side. Job’s tears should be picked over before cooking and any darker or damaged-looking grains discarded because they will give a bitter taste to the whole pot. 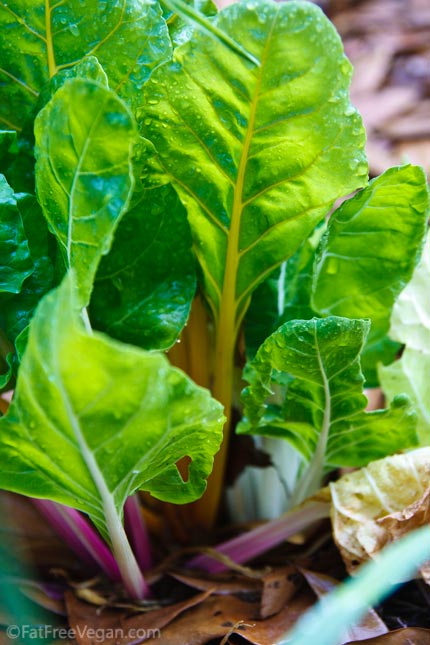 I harvested the last of my winter crop of rainbow chard last weekend and wanted to use it in a quick skillet dinner with white beans. I thought it could use a hearty grain, something bigger than quinoa or millet or rice, something that wouldn’t get lost among the leaves and beans.

That’s why I reached for my unopened bag of Job’s tears, but any larger grain will do. If you can’t find Job’s tears, try it with barley or, if you’re gluten-free, buckwheat groats or canned hominy. 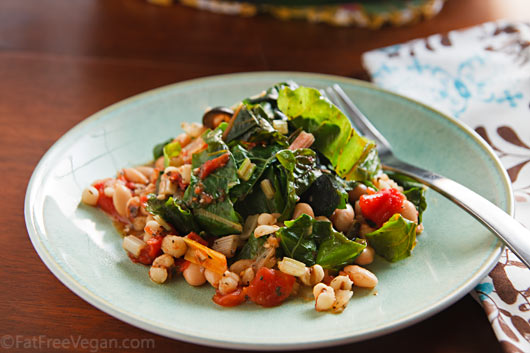 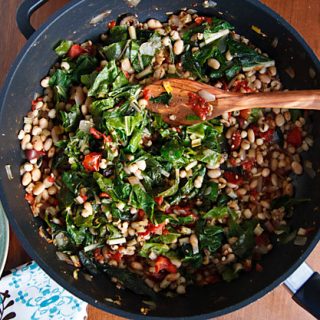 Gluten-free job's tears pair wonderfully with Swiss chard and white beans in this easy vegan dish.
Swiss chard is like two vegetables in one. Most recipes recommend removing the stems and saving them for another use, but very few recipes exist for chard stems alone, so they often go unused. I like to use the whole vegetable in my recipes. The stems need to be cooked longer, so I chop them and cook them along with the onions at the beginning and add the leaves near the end.
Prep Time 15 minutes
Cook Time 1 hour 20 minutes
Total Time 1 hour 35 minutes
Servings 4
Author Susan Voisin

If chard is unavailable, kale makes a good substitute, though you may not need the balsamic vinegar, which I use to cut the bitter flavor of the chard. Each serving is 4 points on Weight Watchers Freestyle program.
Nutrition Facts
Swiss Chard with White Beans and Job's Tears
Amount Per Serving (1 serving)
Calories 349 Calories from Fat 37
% Daily Value*
Fat 4.1g6%
Sodium 876.6mg38%
Carbohydrates 60.5g20%
Fiber 11.9g50%
Sugar 9.2g10%
Protein 22g44%
* Percent Daily Values are based on a 2000 calorie diet.

Course Main Course
Cuisine Gluten-free, Vegan
Keyword gluten-free grain, job's tears
Have you made this recipe?Mention @SusanFFVK and tag #fatfreevegankitchen in your photos on Instagram.
Share on Facebook Pin This Recipe Share by Email 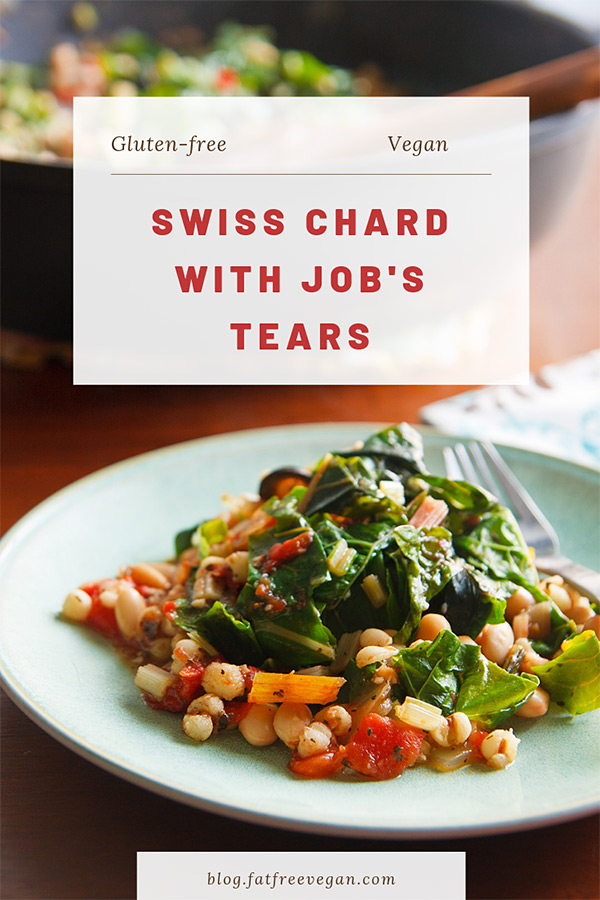 Disclosure: Amazon links are to products I actually use. When you buy something through them, I receive a commission that supports my work on this site.