In this healthy update of the Korean classic bibimbap, black-eyed peas are cooked with garlic, ginger, and red pepper and served with kale. 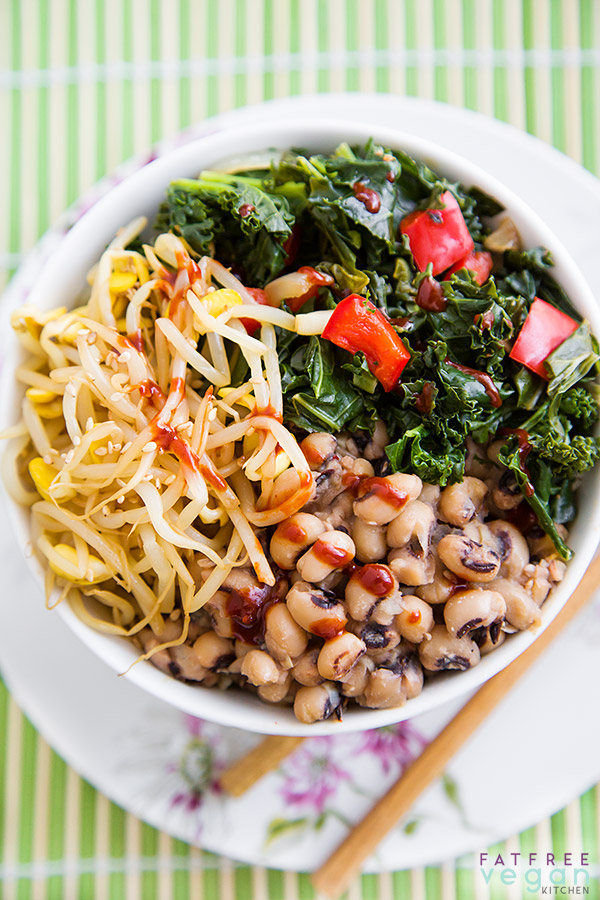 Coincidentally, I’m 2 days early in wishing myself a Happy Blogging Anniversary. That’s right, on January 9 this blog will be 7 years old. I wish I had something profound to say about that, but frankly, I ran out of wise words on my third anniversary! Everything I wrote then still applies, and I am still thankful to all of you who read this blog for giving me an audience for my low-fat (and often off-beat) concoctions.

As you probably know, I like to start off every year with the traditional meal of black-eyed peas and greens. However, I don’t feel compelled in any way to make either the peas or the greens in the traditional Southern way. Just take a look at my last post, a round-up of some of my favorite New Years recipes, and you’ll see that I’m all over the culinary map.

This year I was inspired by a visit to The Wandering Buddha, a wonderful vegan Korean restaurant that my family and I visited while in New Orleans for Christmas. The sweet and spicy flavors of the two appetizers, three entrees, and three desserts that the three of us shared (we pigged out) reminded me why I like Korean food so much. 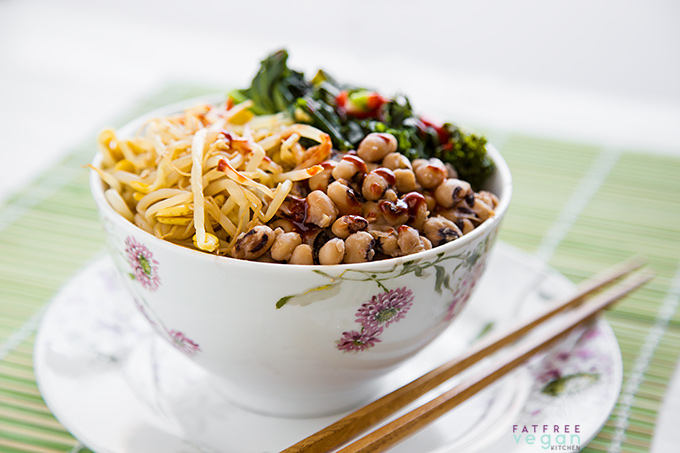 So for this year’s black-eyed peas and greens, I went back to an old favorite Korean recipe, bibimbap. It is, to my mind, the prototype for all those “rice bowls” you can find in vegetarian restaurants–lots of tasty vegetables with a protein served on top of rice, drizzled with a spicy sauce. For non-vegans, the protein is usually beef and a fried egg, but I’ve always substituted either baked tofu or seasoned edamame.

Black-eyed peas are not a traditional food in Korea, but I thought they’d taste great seasoned with garlic and ginger and a little Korean pepper flakes. And I was right! I rounded out the bowl with a favorite soybean sprout salad; this time, I reduced the soy sauce, sugar, and sesame oil by two thirds, and it came out much lighter on the sodium, fat, and sugar but still flavorful.

Note: Though I mention a couple of special Korean ingredients, this recipe can be made with ingredients commonly found in almost any grocery store. If you’re interested in trying more Korean flavors, I recommend starting out with gochuchang (also spelled gochujang and kochuchang), the spicy pepper paste that has a flavor that’s hard to replace. You might also want to try gochugaru, Korean red pepper flakes, which are not as hot as crushed red pepper and have a deeper, smokey flavor. Both can be found in Korean grocery stores and online. 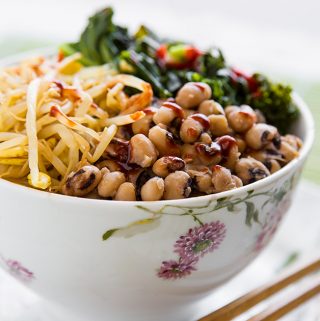 I served this with a simple hot sauce based on Korean red pepper paste (gochuchang). Mix 1 1/2 tbsp. gochuchang, 1 1/2 tbsp. hot water, 1 tsp. sugar, and 1/4 teaspoon sesame oil in a small bowl. This makes a lightly spicy sauce that most people will not find too hot. Easy Hint: You can use 2 cans of black-eyed peas, rinsed and drained, instead of cooking dried peas. Simply begin with step 2, use water instead of cooking liquid, and increase the amounts of ginger and garlic, as desired. Gluten-Free and Soy-Free? Make this using coconut aminos instead of soy sauce. Without rice, this bowl is zero points on the Weight Watchers Freestyle program.
Nutrition Facts
Korean-Inspired Black-eyed Peas and Kale Bowl
Amount Per Serving (1 serving)
Calories 186 Calories from Fat 9
% Daily Value*
Fat 1g2%
Sodium 433mg19%
Carbohydrates 34.4g11%
Fiber 6.2g26%
Sugar 4.1g5%
Protein 12.5g25%
* Percent Daily Values are based on a 2000 calorie diet. 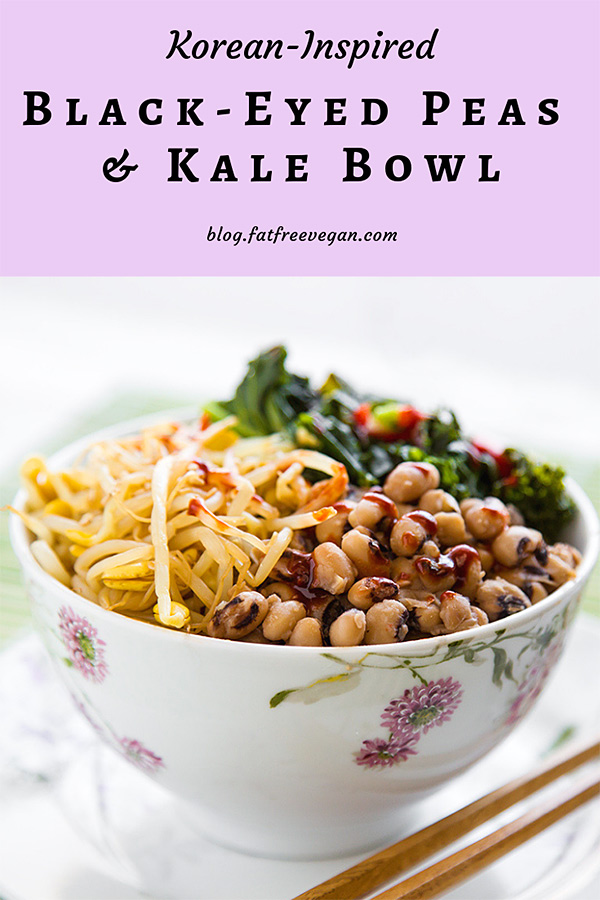