These vegan cabbage rolls are stuffed with lentils, grains, and seasonings, and taste similar to Polish golabki. 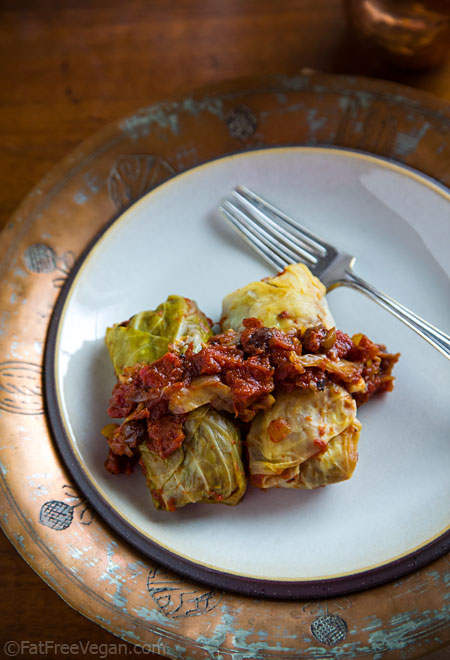 Last week two people wrote to me on the same day asking for a recipe for vegan cabbage rolls, and since I’d never made them before, I decided to take that as a sign. I’m always on the lookout for dishes that I haven’t yet cooked, and besides, cabbage is one of the few green vegetables in season this time of year. It seemed like cabbage rolls and I were meant to be.

Of course, I didn’t know at the beginning just how much work was involved in stuffing cabbage. I decided right away that the filling would be lentil-based; traditional stuffed cabbage recipes require some kind of ground meat, usually cow or lamb, and I find that a combination of lentils and grain is a good vegetarian replacement. So on Sunday, I cooked my lentils (1 1/4 cup lentils, 3 1/2 cups water, 2 cloves minced garlic, salt and pepper to taste and boil uncovered until tender) and soaked my bulgur wheat (1/3 cup bulgar, 2/3 cup boiling vegetable broth).

Then I noticed that the “whole” cabbage I thought I had in my fridge had, in fact, been partially sacrificed to make last week’s Cabbage Noodle Soup. Since it was too close to dinnertime to run to the store for cabbage and still have time to get dinner on the table, I put the lentils and bulgur into the fridge, asked my Facebook followers to tell me what to make with the contents of my fridge, and threw together a modified Aloo Gobi. Buying and stuffing a cabbage would have to wait until Monday.

When I got home from the grocery store on Monday, with the cabbage and 142 other things my family needs in the average week, I was glad I’d already cooked the lentils and grain. Rolling up the filling in the cabbage leaves turned out to be easier than I expected–cabbage leaves just seem to want to wrap themselves around stuff–but the whole process of making the tomato sauce, boiling the cabbage to get the leaves to come free, and trimming the leaves before stuffing them took longer than I expected.

I could have made the whole process much easier by using canned lentils and jarred tomato sauce, but I think the recipe would have suffered. Of course, if you’re not up for an afternoon of cabbage stuffing adventures, do whatever you can to make this recipe quicker and easier. 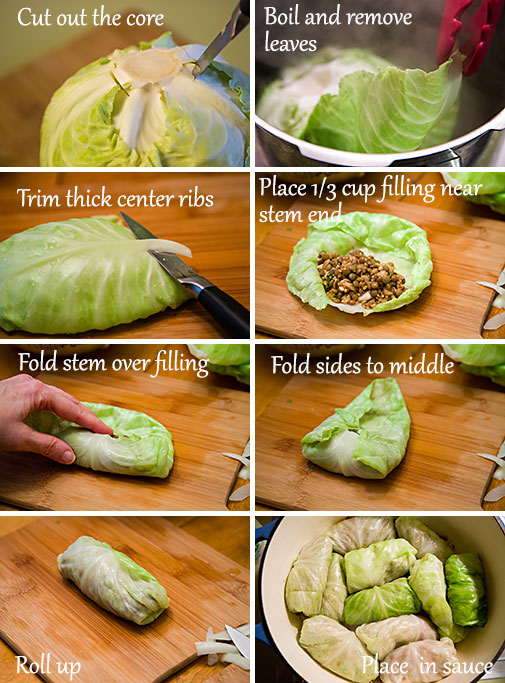 Some things are easier to show rather than tell, so in the spirit of “a picture’s worth a thousand words,” here’s 8000 words’ worth of instruction. I’ve made it printable, so just click on the link above it if you’d like to have a copy to keep with the recipe.

Since it was my first time making cabbage rolls, I decided to be conservative and stick to the seasonings in the non-vegetarian recipes I found in cookbooks and online–meaning very little seasoning. As a result, these vegan cabbage rolls are an excellent showcase for the earthiness of the lentils, the sweetness of the roasted tomatoes and raisins, and the, um, cabbaginess of the cabbage. I thought they were delicious as-is, but I’ve added a few seasoning suggestions to the recipe for those of you who like things highly seasoned. 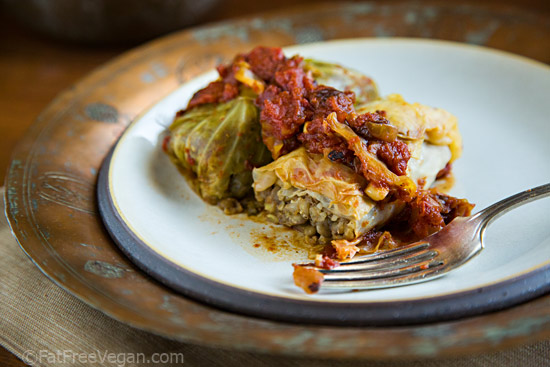 Be sure you have cooked lentils and grain on-hand before beginning this delicious but somewhat time-consuming recipe. I advise cooking them the day before. You can also mix the filling ingredients and store them in the refrigerator until you’re ready to make the rolls.
Prep Time 1 hour
Cook Time 1 hour
Total Time 2 hours
Servings 5
Author Susan Voisin

This is a very mild filling, inspired by Eastern European recipes that don’t use a lot of seasonings. Therefore, you can use it as a template to make rolls that reflect whatever culinary heritage you like. Here are some seasoning ideas: Spice it up with red pepper flakes or cayenne, or go in a Louisiana direction by adding some Creole seasoning. Add chili powder and cumin for southwestern flair. Make them more like Polish golabki by adding sauerkraut to the sauce or filling. Throw in some chopped fresh dill or caraway seeds Give it an Italian twist with oregano and basil. Go in a Middle Eastern direction by increasing the allspice and adding cinnamon and perhaps some mint (or season like stuffed grape leaves). *For low-sodium diets, omit the salt and use salt-free canned tomatoes. Two cabbage rolls count as 3 points on Weight Watchers Freestyle plan (2 points of that is the raisins.)
Nutrition Facts
Vegan Cabbage Rolls
Amount Per Serving (2 rolls)
Calories 356 Calories from Fat 11
% Daily Value*
Fat 1.2g2%
Sodium 1333.4mg58%
Carbohydrates 72.3g24%
Fiber 19.8g83%
Sugar 25.4g28%
Protein 18.1g36%
* Percent Daily Values are based on a 2000 calorie diet.