Fennel seeds, herbs, and red pepper flakes give this healthy, vegan Zuppa Toscana a sausage-like flavor without all the fat and cholesterol. 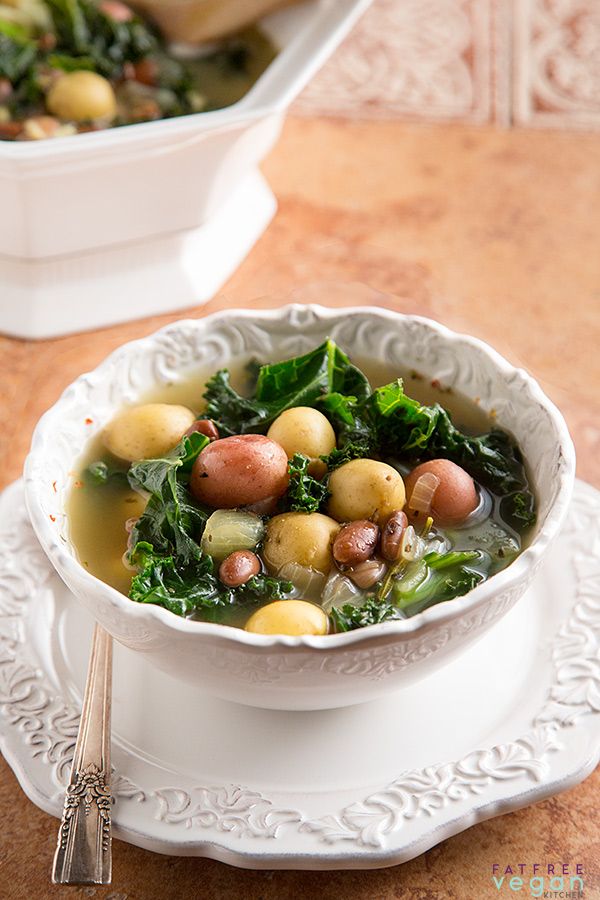 It’s been a big week here in the FatFree Vegan household. First of all, last Saturday we got a new family member! If you’re a Facebook follower or NewsBites reader, you’ve already been subjected to the cuteness that is our still unnamed kitten. But in case you’ve missed one of my press releases, here’s the story:

On Friday, CARA, the no-kill animal shelter where my daughter volunteers, posted a photo on Facebook of a kitten that was the spitting image of our Leda, who died of cancer 5 years ago. When I read that this kitten had been rescued from an abusive situation, I just knew we should take him in–despite the fact that we already have 4 cats and a blind dog. I filled out an adoption application, not really thinking that I had a chance because a lot of people on Facebook were interested. 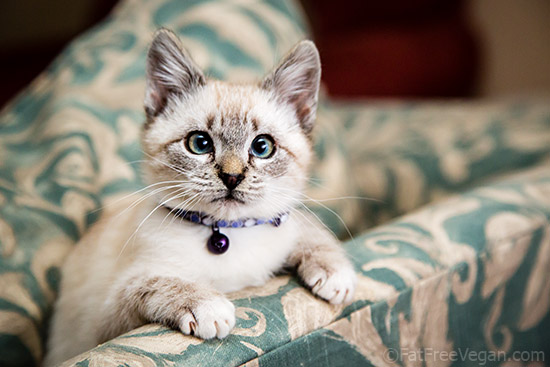 Honestly, I had practically forgotten about the application (which I had filled out without my husband’s knowledge) until the next morning when I got a call from CARA saying that we had been approved. Having a daughter who is a hard-working volunteer makes all the difference! I said we needed to meet the kitten first (I actually needed a little time to work on the husband), so we arranged to come in to the shelter that afternoon.

My daughter E accompanied me, and it was love at first sight. 7-week-old “Downton,” as the shelter called him, was playful and friendly, despite his traumatic experiences. I learned that he had wandered up to a man’s door, starving and dehydrated, and the man had picked him up and thrown him across his yard. Fortunately, some neighborhood kids saw it happen and took him to a neighbor who loves cats. She called CARA, and they got him to a vet. He was in such bad shape that he wasn’t expected to live through the night. But the vet put him on an IV, and he slowly began to recover. It took two weeks before he was eating on his own and ready to be adopted. I am so thankful to CARA and the vet for saving this precious life!

“Downton” has settled in and is slowly winning over the other cats. The three of us can’t agree on a name, however, so right now he’s known as The Kitten. I’m sure that will change, but it’s hard getting 3 people with different ideas about the naming of cats to agree.

The second happy happening this week was that Jackson, Mississippi, finally got a Whole Foods Market. I’ll admit that I was a little conflicted about this. I love our local natural food store, Rainbow Grocery, and hope that the competition won’t be too much for it. The new Whole Foods was packed with people all week, and since it’s one of their smaller stores, it was difficult to really shop. I went in the second day they were open and couldn’t get to everything I wanted to. I spied these tiny potatoes across the produce department, but there were so many people crowded around them that I couldn’t get close: 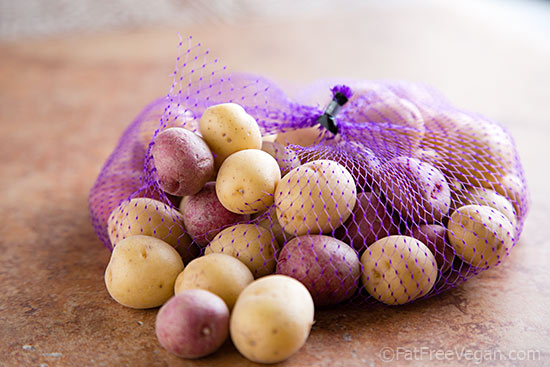 I meant to go back for them but forgot. When I got home, I kept imagining how good they would be in a sort of healthed-up, veganized version of the Olive Garden Zuppa Toscana I’d seen on lots of blogs. So I braved the crowds at Whole Foods again the next day, bought two bags of tiny potatoes, and signed over my paycheck for the second time in one week. I guess I wasn’t as conflicted as I thought!

Anyway, I’ve never been to Olive Garden and never had their soup, which seems to contain sausage, bacon, and heavy cream–a heart attack in a bowl. So I doubt this really compares, but to me, it was incredibly delicious for something so simple. I had it for both lunch and supper yesterday, and I’m one of those people who hates to eat the same meal twice in a row.

Fennel seeds, herbs, and red pepper flakes give it a sausage-like flavor without all the fat and cholesterol. My tiny potatoes, many about the diameter of a nickle, I threw into the pot whole, but bite-sized chunks of any kind of potatoes will do. Half of a 12-ounce bag of pre-sliced kale (another Whole Foods purchase) cooked down enough to make this a moderately brothy soup (which is what I was craving), but feel free to increase the amount of kale and add extra seasonings, too. 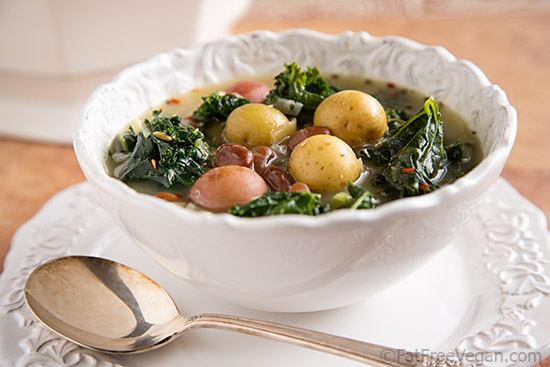 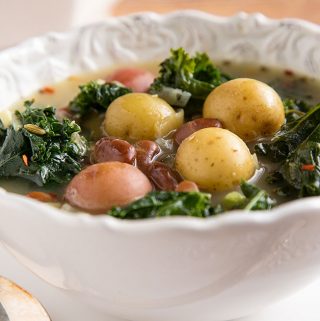 Fennel seeds, herbs, and red pepper flakes give this healthy, vegan Zuppa Toscana a sausage-like flavor without all the fat and cholesterol. Blending in some non-dairy milk and nutritional yeast at the end adds a slight creaminess and “cheesy” flavor, but it’s not essential because this simple soup is naturally flavorful without it.
Prep Time 15 minutes
Cook Time 35 minutes
Total Time 50 minutes
Servings 6
Author Susan Voisin

Much of the flavor of the soup depends on the broth that you use, so use one that you like. Be aware that broth and bouillon can be very high in sodium. Most of the sodium in this recipe comes from the broth and the beans. In analyzing the nutrition, I used 6 teaspoons of Better Than Bouillon No Chicken, which is fairly high in sodium, and pinto beans cooked without salt. The broth accounts for 680 mg of the sodium listed. Without milk and nutritional yeast: 193 calories and less than 1g total fat. Each bowl, with all optional ingredients, is 2 points on Weight Watchers Freestyle program.
Nutrition Facts
Zuppa Vegana: Italian Potato, Bean, and Kale Soup
Amount Per Serving (1 Serving)
Calories 207 Calories from Fat 12
% Daily Value*
Fat 1.3g2%
Sodium 703.3mg31%
Carbohydrates 39.9g13%
Fiber 8.5g35%
Sugar 2.6g3%
Protein 11.1g22%
* Percent Daily Values are based on a 2000 calorie diet.

Course Main Course, Soup
Cuisine Italian, Vegan
Keyword vegan zuppa toscana
Have you made this recipe?Mention @SusanFFVK and tag #fatfreevegankitchen in your photos on Instagram.
Share on Facebook Pin This Recipe Share by Email 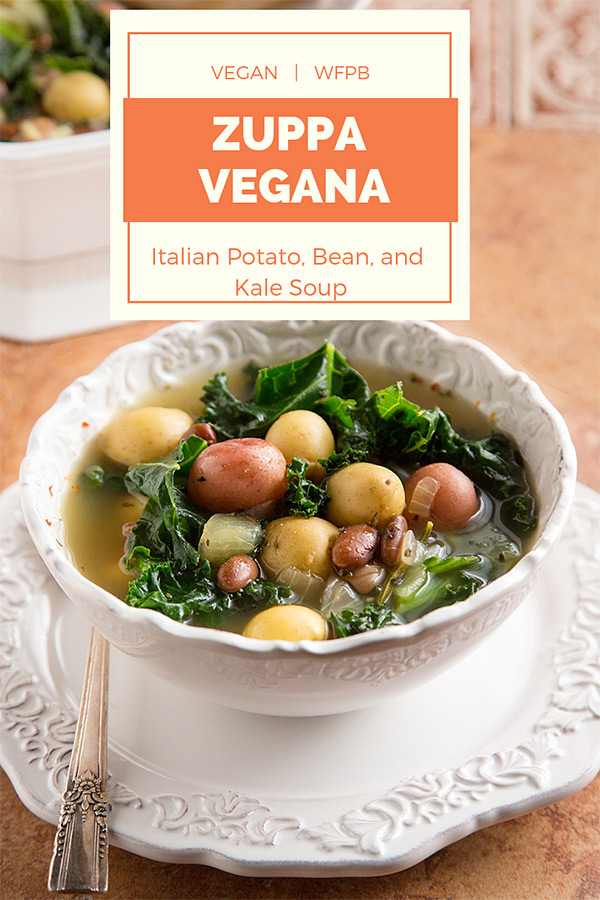 This post contains Amazon affiliate links to products I like. When you buy something through one of my Amazon links, I receive a commission that helps support this site. Thanks for your purchase!