Crispy on the outside, tender on the inside, these baked portobello fries are vegan and completely oil-free. Try them with Horseradish Comeback Sauce! 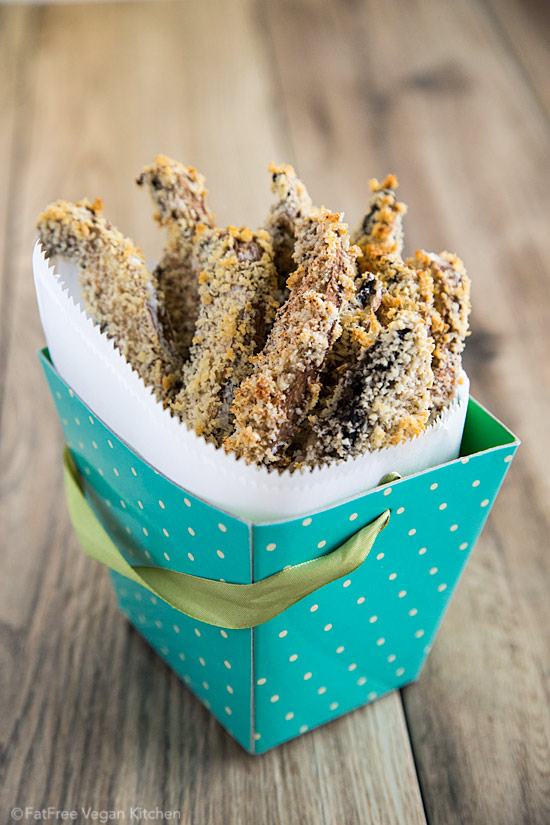 Going out to eat and having one vegan-looking dish after another turn out to contain just one (usually unnecessary) non-vegan ingredient is enough to make some people throw up their hands and vow to do all their own cooking. I look at it as a challenge (I can usually get the kitchen to make something vegan for me) and as a source of inspiration. Portobello fries sound good; therefore, I will find a way to make them not only vegan but also oil-free. Take that, restaurants of the world! 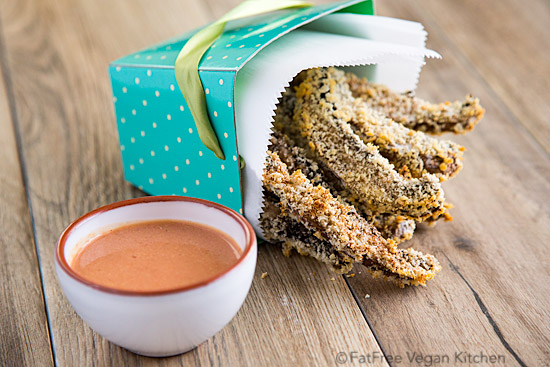 I noticed portobello fries on the menus of two local restaurants recently, one of which served it with Spicy Horseradish Comeback Dressing and declared “Taste why so many other restaurants try to copy our signature appetizer.” Hmmm, I thought. Horseradish comeback dressing sounds delicious, and if everyone else is copying it, why shouldn’t I? Since I haven’t actually tasted any portobello fries, I looked to non-vegan blogs to learn how they’re usually made and found an easily veganizable recipe at Inspired Taste.

How to make Baked Portobello Fries:

I’ve made baked portobello fries a few times now, enough to feel comfortable enough to do it on a video so that you can see how easy (but messy) it is.


There’s one possibly unfamiliar word in the video and recipe, and that is “aquafaba.” That’s just fancy Latin for “bean water.” It’s the cooking liquid from a can or pot of chickpeas, and it makes a great substitute for egg in this recipe, especially if you chill it first so it gets thick. If you haven’t been saving your bean water, you can still make the recipe using soy milk or other non-dairy milk, but I recommend adding a little flax or chia as a thickener. 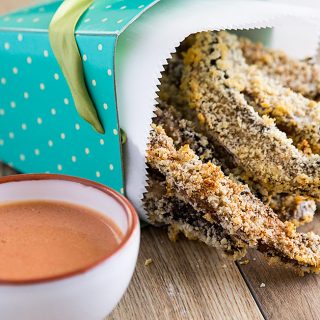 Aquafaba is the liquid from cooked or canned beans (usually chickpeas). It makes a great substitute for egg in this recipe, especially if you let it refrigerate it beforehand (it's thicker and more egg-like cold). Soy milk, almond milk, and other non-dairy milks also work, but they work better with a little flax seed meal added to make them thicker. Try adding 1/2 teaspoon of ground flax and allow to thicken for a few minutes. If your bread crumbs are seasoned, use less Creole seasoning to avoid over-salting.
Nutrition Facts
Oil-Free Baked Portobello Fries
Amount Per Serving (1 serving)
Calories 268
% Daily Value*
Sodium 319mg14%
Carbohydrates 54g18%
Fiber 2g8%
Sugar 3.66g4%
Protein 10g20%
* Percent Daily Values are based on a 2000 calorie diet.

The last time I made portobello fries, I skipped the dipping and used them as the filling on a portobello burger. So good! The Horseradish Comeback Sauce makes a spicy replacement for both ketchup and mayo. 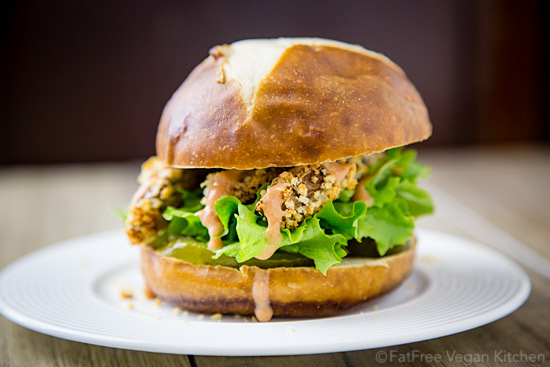 This version of Comeback Sauce is easier, less “wholefoodsie” than the vegan comeback dressing I posted previously. I gave in and just used ketchup instead of several separate ingredients. If you’ve been making Onion Cream, here’s a great opportunity to use it. It adds a sweetness and depth of flavor that the soy milk version lacks (but then again, using soy milk is so much easier!) 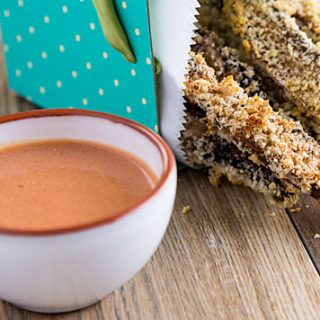 This spicy, horseradish-infused sauce isn't like any other you've had. You'll have to come back (get it?) for more!
Prep Time 5 minutes
Cook Time 1 minute
Total Time 6 minutes
Servings 4
Author Susan Voisin

You can make this using soy milk instead of onion cream, but you will need to add 1/4 teaspoon onion powder for flavor and at least 1 teaspoon of ground flax or chia seeds for thickening. Allow to stand for at least 15 minutes before serving.
Nutrition Facts
Horseradish Comeback Sauce
Amount Per Serving (3 tablespoons)
Calories 37
% Daily Value*
Sodium 500mg22%
Carbohydrates 9.3g3%
Fiber 1.25g5%
Sugar 5g6%
Protein 0.85g2%
* Percent Daily Values are based on a 2000 calorie diet.