I’m sorry for the lack of posts lately and if you’ve emailed me, I apologize for taking so long to reply. It’s been a very busy week here–the last week of school, and my daughter is “graduating” from third grade. On top of that, I’ve been having some back trouble that’s making it hard for me to sit at a computer or stand in a kitchen, two activities that are essential if you write about what you cook. I’m doing my back exercises, though, and I hope to be back on my feet soon.

In the meantime, I thought I’d post some of the photos I’ve taken but not written about: 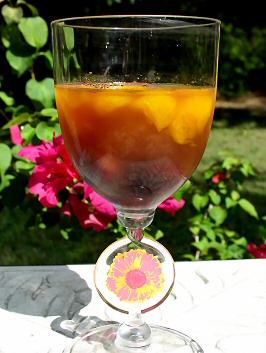 This is a jelled dessert I made using tea and agar. I used pomegranate tea mixed with the juice from a can of mandarin oranges to form two cups of liquid, mixed it with one teaspoon of agar powder, and cooked it until the agar dissolved. Then I poured it over the mandarin oranges in individual glasses. Simple and refreshing! 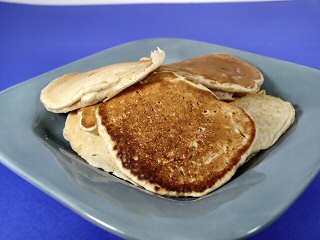 Last Sunday, my daughter E. decided to make pancakes all by herself. She found a recipe in Kids Can Cook Vegetarian Recipes

and added cinnamon and bananas to it. She also insisted on taking all the photos and even choosing the plate and the background. She couldn’t keep me from taking at least one photo of the happy chef herself: 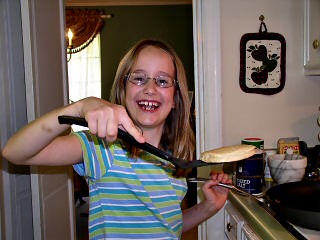 The pancakes were great, but they did have a LOT of cinnamon. I think she’s going to be a “throw it in until it looks right” cook like her mom! 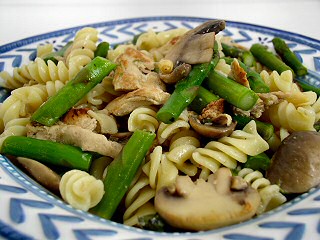 This is a pasta dish I made for my parents when they were here a few weeks ago. It’s based on this recipe for Rotelle With Asparagus and Mushroom Sauce, but I browned a little of those Morningstar Farms fake chicken strips and added them along with some pinenuts and a touch more olive oil. It wasn’t fat-free, but it was delicious. 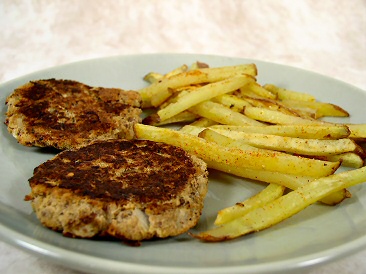 Here are some sausages I made from okara the last time I made soymilk. (Okara is the pulp you have left over after you’ve strained the soymilk.) They were okay, but I wanted to tinker with the recipe some more before I publish it. I served the sausage with some fries that I made with the thicker julienne blade on my mandoline. I just sprayed my non-stick skillet with a little canola oil and browned the fries a little before covering the skillet and letting them steam until they were cooked. Then I sprinkled them with spicy creole seasoning. Yum!

I’ll be back when I can with more recipes, and until then, I hope you’ve enjoyed these photos.

*In southern Louisiana, we call a little something extra “lagniappe,” such as when you buy a dozen beignets (doughnuts) and the baker throws in a extra one for free. Like my last name, it is pronounced just like it looks. Okay, not really! It’s “lan-yap,” rhymes with man cap.