I was finally going to do it. I was going to follow someone else’s recipe, this recipe for Pumpkin Pie Wontons, exactly as written and see how it came out. Then I noticed that it called for pumpkin pie spice, but I figured I could use my own seasonings and it would still be the original recipe. Then I looked in the pantry and found that I didn’t have any canned pumpkin, and that was the end of that idea.

But I still had the urge to play with gyoza wrappers, and it wouldn’t go away. Though I used a few of them in the Peach and Pluot Gyozas last Saturday, I’ve still got a whole stack because they come in packs of 100, and I’d like to use them up before they go bad. So I took an inventory of all the fruit in my kitchen and decided to devise the easiest apple pie recipe ever.

And the apple pie wontons were great–with one problem. As they cook, the wonton wrappers expand and the apples contract, so when they’re done, there’s a lot of empty space inside and not enough filling. They tasted good, but not very satisfying. So I started thinking that what these wontons needed was a dipping sauce. But rather than a thin sauce, how about a thick fruit compote? Or how about a chutney? I looked around my kitchen and found a nice ripe peach that would make a perfect simple chutney. And oh, the combination was divine! 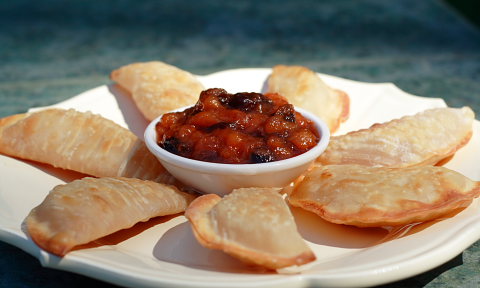 Preheat the oven (I used a toaster oven) to 400 F and spray a cookie sheet lightly with canola oil. 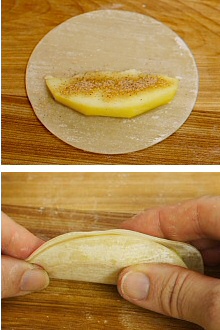 Peel and core the apple and cut it into wedges about 1/4 to 1/2 inch thick. You will want them to be as thick as possible while still allowing you to seal the wonton around them, so cut one or two and try them first.

Place an apple slice on a wrapper with the straighter edge along the center line. (If you’re using square wrappers, lay the apple diagonally.) Sprinkle the apple with as much cinnamon and sugar as you like, taking care not to get it on the edges of the wrapper.

Moisten the edges of the wrapper with water.Fold the wrapper over the apple slice, and pinch it to seal. This works best if you hold the wonton with one hand while you pinch it closed with the other. (If you’re using square wrappers, you should be left with a triangle.)

Place the filled wontons on the baking sheet, spray them lightly with canola oil, and bake for 10 minutes. Turn them over and bake for another 10 minutes, or until lightly browned on both sides. Remove them to a wire rack to cool.

Serve sprinkled with cinnamon and sugar or serve with Peach Chutney to dip.

I did this in the microwave, but you can easily do it on the stove. Just allow a little more cooking time.

Place the peach, juice, raisins, and agave nectar in a small microwavable bowl, and cook on high power for one minute. Stir and cook for another minute, or until the peaches start to break down and the raisins grow plump. (If it starts to seem dry, add a little more juice, but this should be a very thick mixture.) Break the raisins up slightly using the edge of a spoon to release their sweetness into the chutney. Stir in the cloves and vinegar, and cook for one more minute.

Simple, but delicious! The peach chutney brought back memories of my mother’s pickled peaches–sweet and sour peaches with a hint of cloves. If you have chutney left over, spread it over some freshly baked whole grain bread for a real treat.

And the next time I play with gyozas, I’m going to fill them with peach chutney!