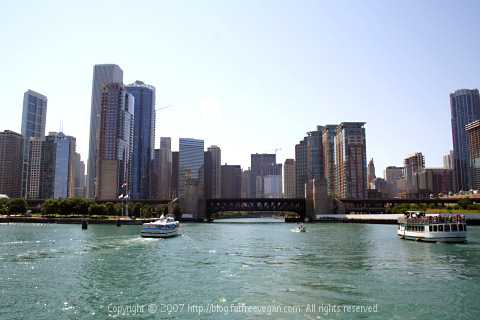 View of Chicago from a tour boat

I’m back from Chicago. I had a fantastic time at BlogHer, so crammed full of interesting people, experiences, and food that I’ve been unable to process it and put it into words. Being the technical geek freak that I am, though, I have been able to process some of the nearly 300 photos that I took. Actually, I didn’t take them all. My daughter E. was a major contributor to the photo pool, as you will see.

I got to Chicago on Thursday for the speaker training, where basically we were told nice ways to get people to shut up if they started droning on in our sessions. (Unfortunately, they didn’t give me any hints on getting myself to shut up when I started rambling in the Foodblogger session, but then my mother tried for years to teach me that, with no success.) Afterward I met up with most of the other members of the food blogging panel, including my email pal Alanna, who let me tell you is the walking definition of “sparkling personality.” She’s as extroverted as I am introverted, and I’m thankful to her for convincing me to get off my shy butt and go to the conference.

Next was a cocktail party where the vegan options were raw vegetables and tiny bruschetta. When I got there, I didn’t see anyone I knew, but fortunately several people took pity on me and drew me into conversation, including Chloe of the lucrative Ultimate Neopets blog and her dad, who turned out to be vegetarians. Eventually I caught sight of the other foodbloggers–Kalyn, Elise, Shuna, Kat, Jasmine, as well as Alanna–who were planning to go leave the party and go out for ribs.

While I made another run to the food table, trying to decide if I could eek out enough calories to sustain me on a hike to a restaurant where I’d probably only be able to drink (not that that’s a bad thing), I struck up a conversation with the new photo editor of BlogHer, Heather Clisby, with whom I immediately fell in like. Heather is hilarious. (Note to BlogHer: make her your humor editor. She can still be photo editor, but pay her twice.) I invited Heather along to the ribs party, figuring that if I couldn’t eat, at least I could laugh, and off we headed on a 10-block walk to Carson’s, where I had a great portabella burger and an even greater time. These women are all amazing–funny, intelligent, outspoken, and warm–and I was happy to be munching on a mushroom in their midst. 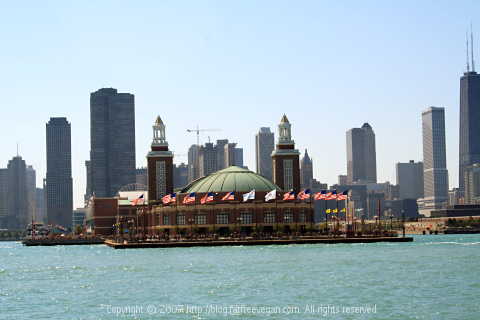 I woke up bright and early at 3:30 the next morning, unable to go back to sleep, so I was very on time for the conference, which took place in the Grand Ballroom at the end of the Navy Pier. I gave out all of my Moo Cards business cards during the first session, where I “speed dated” about 15 other bloggers. (I’m such a slut!) The rest of the day is a blur. The most interesting session was Our Bodies, Our Blogs, whose panel included Wendy McClure of the brilliant Pound. (Earlier Wendy had come up to me to tell me that she likes my blog, and I sputtered like an imbecile, one of my three most embarrassing moments of the conference.) Now, I think that women are beautiful in all sizes, but often I don’t extend that consideration to myself, so this session was just what I needed to hear. The trouble is, advertisers and most men need to hear it too, but how to get through to them?

I skipped out on the late afternoon sessions and walked back to my hotel in time to meet D. and E. who had flown in earlier in the day. After treating the blisters on my feet (that walk is a killer in flimsy flip-flops), we were ready to go to Chinatown for the foodbloggers’ dinner at Lao Sze Chuan, arranged by Alanna and Terry of Blue Kitchen. In addition to the bloggers I’ve already mentioned, I got to spend time with Nupur of One Hot Stove,the very first blogger I ever stole from and a lovely person; the amazingly strong Jasmine, who had just received some tragic news; a new blogger, Janice, who expects her blog to be online soon; Anne-Marie, with whom I compared parenting notes; and Ruth of Once Upon a Feast, who seemed as compassionate as she is intelligent. As the evening wore on, E. became bored, as 10-year-olds will do when faced with adults who only want to talk about food blogs, so I gave her my camera and instructed her to take photos of everyone who didn’t object. Check out her Flickr Foodblogger Photos for shots of most of the people who attended. 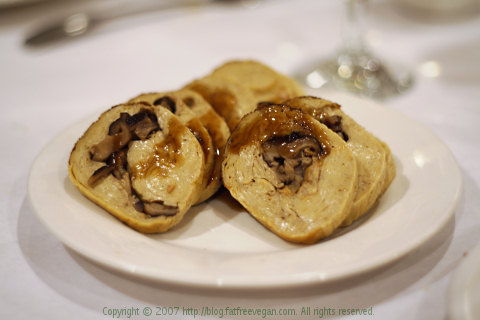 So I know you’re asking, “How was the food?” In a nutshell: HOT. We sat next to Nupur so that we could share vegetarian dishes, and she said of the Ma Po Tofu, “This is the hottest thing I’ve ever had in an American restaurant.” Now I love spicy food, but this was so hot that all you could taste was hot. The silken tofu was nicely cooked, though–firm so that it didn’t fall apart like mine invariably would. We also had Hunan Style vegetables, which were supposed to be only mildly spicy, and they were extremely spicy too. The two non-spicy dishes, the Vegetarian Chicken Shanghai Style appetizer and the bok choi with mushrooms, were both good, though not outstanding. I loved the sauce on the baby bok choi, but I had a hard time cutting it because we weren’t given a knife. The veg chicken was good, flavored strongly of 5-spice powder, but not something I would go out of my way to order again. Though it was interesting to visit an authentic Chinese restaurant, in this case the company totally overshadowed the food.

Our Foodblogger panel discussion and the Food Photography session were both on the next day. Extreme nervousness makes my memory of our panel discussion kind of hazy, though I do remember that Kalyn was Oprahesque in her command of the session, Shuna was outspoken and articulate in her defense of restaurant owners, and Nupur brought us practically to tears telling of the letters she’s received from readers. Jasmine gave valuable blogging advice, Elise answered technical questions about copyright, and Alanna discussed the difference between food writing and blogging. And me? Well, I tried to be helpful, but I’m not sure how successful I was. (Check out this summary of the foodblogging discussion for an idea of how it went.)

Of course, I thought later of things I should have said. I haven’t mentioned it before, but the sponsor of our session was Butterball. As in turkey. I was warned beforehand about this, but I accepted the offer to speak anyway. I thought that going and having a vegan voice on the panel was more important than symbolically rejecting the corporate sponsor, and in the discussion, I said something like “I wasn’t going to let Butterball silence me.” I wish I’d mentioned that probably all of us panelists advocate eating more organic and local foods, so BB doesn’t really speak for any of us, but their sponsorship did allow us to present our views on the subject.

Later that afternoon, I had the pleasure of attending the Food Photography session with Lara and Béa, of Still Life With and La Tartine Gourmande. They did a wonderful job sharing techniques for taking better food photos, and Jan Kabili offered some tips for post-processing in PhotoShop. Béa has posted some of her tips, and there’s a transcript of the session at happykatie, so be sure to take a look.

I’m so happy to have been able to go, and I want to thank everyone who made it happen, including BlogHer co-founder Elisa Camahort (a vegan!). What do I have to do to be invited back next year?

I’m going to rest up from all this typing and come back at you with some photos from the veg restaurants D, E, and I went to.