Those of you who guessed Colorado as the answer to the question in my last post were correct. We’re in Rocky Mountain National Park, or rather in Estes Park, just outside the park. The photo yesterday was taken at Emerald Lake, and the hike to get there involved picking our way carefully over lots of snow (I wasn’t so careful once and slid all the way down a section of the trail on my rear end–which stayed embarrassingly wet the rest of the hike!)

It is incredibly beautiful here. Here are a couple more photos: 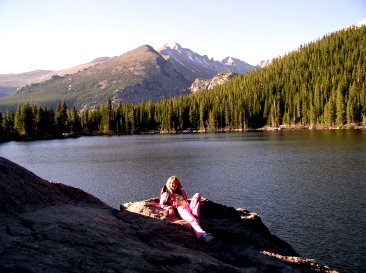 That’s my daughter E. relaxing on the shore of Bear Lake. Here’s another taken from the same lake: 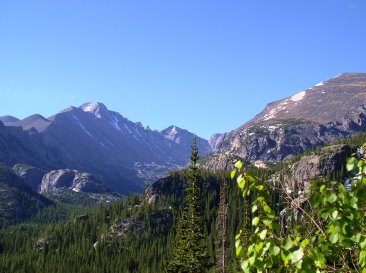 I’d like to bring this around to food, but I’m afraid I haven’t been cooking–unless you count the guacamole I improvised to serve with tonight’s Garden Burgers. We’ve had great luck finding vegan food at restaurants, so we’ve dined out every night but tonight. In Selina, Kansas, we ate at a Mexican restaurant, lured by a billboard that mentioned vegetarian dishes. We were amazed to find one of the dishes on the menu was vegan–and full of fresh vegetables–while the other dishes were easily veganized. Here in Estes Park, we ate Hummus Pizza one night, an interesting concept that didn’t taste as good as I’d hoped, and had wonderful Indian food another night. It hasn’t been fat-free, of course, but when traveling, I’m happy to find anything vegan!

Tomorrow we’re headed to the western side of the state to visit the Black Canyon of the Gunnison National Park. We won’t have wireless internet in the remote cottage where we’re staying, so I don’t think I’ll be able to post until we’re on the way back.

Oh, there were some questions I wanted to answer: Danielle, I used a packaged cheesy sauce this time, but if you check Recipes Index, I’ve got a couple of recipes in the Sauces section that I really like.

Freedom, I tried to answer your question about the marinated peppers, but my computer picked that moment to crash. I think that they would be fine–just maybe use a little less than you would of the roasted red peppers. Try tasting as you add them.

Take care, everybody! I’ll be back soon.