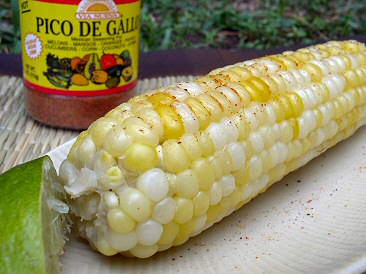 I love corn on the cob, but I avoided it for a long time after I gave up oils and margarine because I didn’t know what to put on it. Then I discovered a combination that I actually like better than margarine: Lime juice and spicy seasoning.

The tanginess of lime juice is a perfect complement to the sweetness of fresh corn. And, as regular readers of this blog know, I love all things spicy. My favorite corn seasoning is Via Nueva Pico de Gallo, a combination of salt and mixed hot chili peppers. Other hot and spicy mixes, such as Creole Seasoning, are also tasty, as is chipotle chili powder or cayenne pepper (for an extremely spicy kick with no added salt). I just squeeze the lime juice onto the corn and sprinkle on the seasoning. I never miss the margarine!

I’d love to have more (perhaps non-spicy) options for eating corn on the cob. What’s your favorite low-fat corn topping?

For another great way to prepare corn, check out… 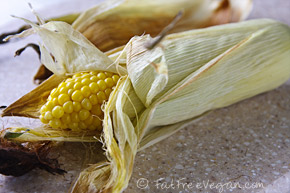 Roasted Corn on the Cob