I wanted to share with you a couple of blogs that I’ve been reading, but since no blog entry is complete without a photo, I thought I’d break my own “food-only rule” and post a photo of my dog, Jazzy. I managed to get her to stand still long enough to take her photo yesterday–a rare event for this hyper dog. She’s looking up at her squeaky ball that I’m holding ransom, waiting for me to throw it. 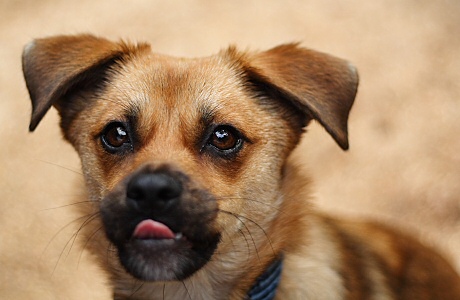 To get her attention, you have to either offer her treats or play fetch with her. I figure it balances out as long as we play with her enough to burn off the calories of the treats. (Dog lovers can check out more doggie photos at Sweetnick’s later this weekend.)

Now, for the real reason for this post: If you look at my links list, you’ll notice that I read (or try to read) way too many blogs. I’ve recently been going through them and trimming off any blogs that aren’t posting anymore to keep the list useful to people looking for good blogs. Today it occurred to me that there are a lot of interesting vegan blogs that aren’t getting much attention and really deserve it. So every now and then, when I don’t have a recipe to post, I’ll point out to you a blog you should check out. (Please don’t be hurt if I don’t mention your blog–it’s probably because it’s already receiving a lot of comments or links.)

First of all, Dilip Barman of Dinner with Dilip has done something that amazes me: ever since June of 2004, he’s cooked a different vegan dinner for his wife and himself. No repeats! He’s been blogging these dinners since this past March, and while he doesn’t always include recipes, he has photos of the dinner plates and very detailed descriptions of the food. Since Dilip teaches cooking, you’ll also get a glimpse at what he’s cooking up in his classes. If you can’t think of anything to make for dinner, browse through Dilip’s archives for some great ideas.

Kaji’s Mom…A Transition to Vegan is a brand new blog, just started at the beginning of this month. Kaji’s Mom (Kaji’s a dog, by the way) provides recipes, many of which are low in fat, and takes gorgeous photos of the food. She’s just getting started, and I, for one, want to see her keep on blogging, so drop in and let her know if you like her stuff.

You know, people rarely blog in a vacuum; it’s feedback from readers that keeps most bloggers blogging. So please, whenever you visit a blog that speaks to you in some way–with a photo that made you salivate, a comment that made you laugh, or a cooking idea that you never would have thought of–leave the blogger a comment so that he or she will know that someone is listening, that someone appreciates the time and effort that goes in to the blog. I know I need to be better about commenting, too, but with over 100 blogs on my blogroll, it’s hard to get around to all of them. But I will try.