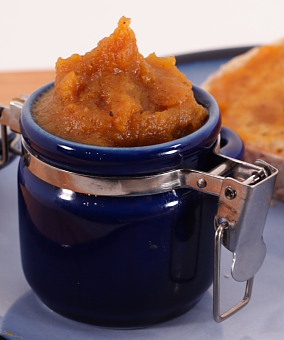 Though my husband and daughter were hoping I’d make another Impossible Pumpkin Pie, I had other plans for the squash that was leftover after I’d cooked the cushaw. (In case you missed the last post, a cushaw is a crookneck squash that is used like pumpkin.) I wanted to make pumpkin butter so that we could spread the taste of pumpkin pie on toast any time we wanted.

To make this a lighter version of pumpkin butter, I replaced some of the sugar with pureed raisins and added apple sauce to make it less starchy. I added spices to my taste, so feel free to taste and add seasonings as you go along. The cinnamon I use is a little stronger than most, so you may find that you need to add more.

Pumpkin-Apple Butter was a big hit with my daughter and her friend. They came home from school and saw it cooking on the stove–actually, they smelled it when they came in the door–and asked for some right away. Two pieces of toast later, they were still hungry for more. I don’t think the batch I made is going to last as long as I thought it would! 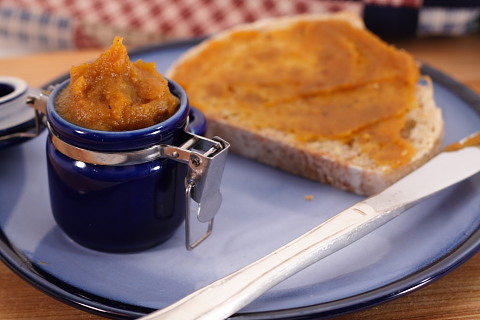 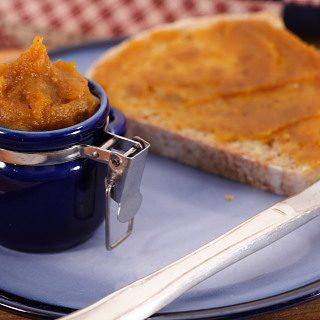 This version of pumpkin butter is lightened up with the addition of apples and raisins instead of some of the sugar.
Prep Time 15 minutes
Cook Time 1 hour 15 minutes
Total Time 1 hour 30 minutes
Servings 25
Author Susan Voisin 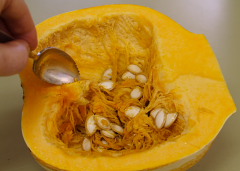 Someone asked in the comments for the Pumpkin Pie post about cooking the cushaw/pumpkin/squash. It’s really very easy. First, wash the squash well, scrubbing with a brush. Then if it has a long neck like a cushaw, cut that off and trim off the stem end. Cut the seed section of the squash in half, and scrape out the seeds and stringy parts. I’ve found that a serrated grapefruit spoon is perfect for doing this.

Once it’s cleaned out, cut the squash into sections that are 1-2 inches wide. Try to keep them the same size so they will cook at the same speed. Do the same with the neck section of the cushaw. Cook the pieces by steaming them in one of three ways: 1) pressure cook for 2-3 minutes at high pressure and then quick-release; 2) put them in a steamer basket set in a large saucepan on the stove for 20-30 minutes; 3) steam them in the microwave by putting them in a covered, microwaveable dish with a little water and cooking until tender (check it every 5 minutes until done). I used the pressure cooker, and in just 2 minutes at high pressure, the flesh was falling off the skin.

Wait until it’s cool, remove the skin, and mash or puree. Now you’re ready to proceed with any recipe that calls for cooked pumpkin or squash.

Or if you don’t want to go through all that trouble, follow Maria’s simple method for baking the whole thing in the oven!