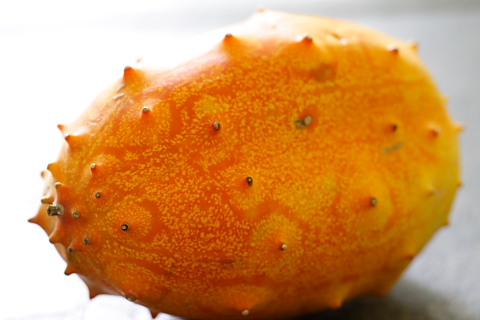 Let me start off by saying this: Do not feel that you have to run out and buy a kiwano to make this recipe.

Okay, let me back up and re-start by saying, do not buy a kiwano unless you just like its spiny shape and swirly orange color scheme.

Hmmm…let me try one more time: Do not under any circumstances buy a kiwano if you are hungry and think you might try to eat it. Trust me. This baby’s for decorative purposes only!

So why did I buy a kiwano? Sheer ignorance–and a daughter who gets excited about new fruit. E. and I were in the store, she saw the kiwanos, and I didn’t want to discourage her interest in anything from the plant kingdom, so I bought it, protesting that I didn’t know what to do with it or even how to pick out a good one.

Turns out, there’s no such thing as a good one. I got home and Googled it, naturally, and found people saying what I’m saying to you now: This one’s a dud. Seriously, if it didn’t have such a distinctive appearance, these things would have been allowed to die out a long time ago. Still, I didn’t quite believe that they weren’t any good; after all, we’re importing them from New Zealand–how bad can they be? 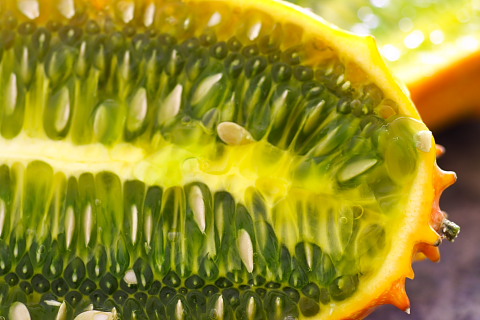 Bad, but not all bad. When you cut open a kiwano, you find that it’s attractive even on the inside, a bright green color with lots of nicely formed seeds. But when you try to remove the “fruit” from the shell you discover that it’s just a gelatinous mass and that those seeds are too tough to eat. Taste it and you find that it tastes decidedly “green”–not bad, really, but the one I bought wasn’t sweet at all. 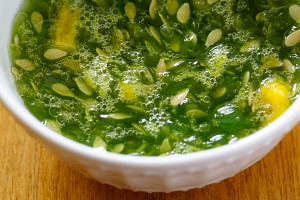 Getting it out of the shell proved difficult, and juicing it proved time consuming. I once again got out my trusty grapefruit spoon (by now I must have set some kind of blogging record for the use of the phrase “grapefruit spoon”) and scraped it out into a bowl. What you see in the photo above is what I got out, but the photo doesn’t convey the sliminess of the stuff. It looks pretty liquidy, but when I poured it into a fine mesh strainer, practically nothing dripped out. I had to push on it and scrape the strainer repeatedly to get anything to go through. Finally I resorted to pushing on it with the flat bottom of a plastic glass. After working on it for a good 15 minutes (which is more than it deserved), I got about 1/3 cup of slimy juice.

So I took the juice and made the following sorbet. It contributed a light kiwano flavor that wasn’t bad at all, mixed with the banana and pineapple. Mostly I was hoping that it would lend the sorbet an attractive shade of green, but it only looks green if you’re expecting it to. The shells made interesting bowls, but they’re hard to get to stand upright without doing a hornectomy. Next time, I’ll use some of those Meyer lemons I picked instead! 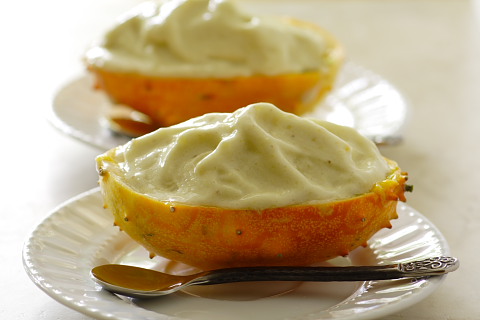