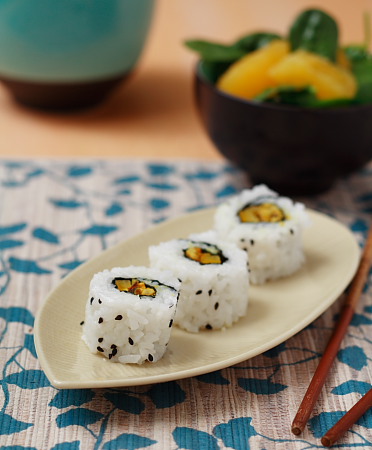 Sometimes two seemingly incompatible tastes come together and the result is magic. This, my friends, was not one of those times.

I don’t know what got me thinking that sushi with a filling of curried tempeh would be a good idea. I just know that once the idea was in my head, nothing was going to convince me that it was a bad one. Nothing except the first bite.

I had my first sign that something was just not right when my husband and I sat down to eat. He’d completely finished his salad and hadn’t touched the sushi. When I suggested he try it, he asked what was in it. “That curried tempeh I was making,” I answered. “Does curry go with sushi,” he asked. “No, silly, it’s FUSION. I’m being CREATIVE!” Famous last words.

We got through the meal and managed to eat most of the sushi, but I really regretted that I hadn’t made any other kinds. We weren’t even completely sure how to eat it. Wasabi was out because the curry itself was already spicy enough. Soy sauce didn’t seem right. I eventually found that dipping it in the sesame-ginger dressing left in my salad bowl actually improved it. We both ate a lot less sushi than we normally would, and since I’m supposed to be avoiding white rice, perhaps that’s a good thing.

All in all, it wasn’t horrible: we ate the meal without gagging, I had the remaining sushi for lunch the next day (with more sesame-ginger dressing), and we found that the leftover curried tempeh makes a pretty good sandwich filling. So, if you’re a “glass half full” kind of person, perhaps you could call this one a success. But I promise not to make it if you ever come over for dinner! 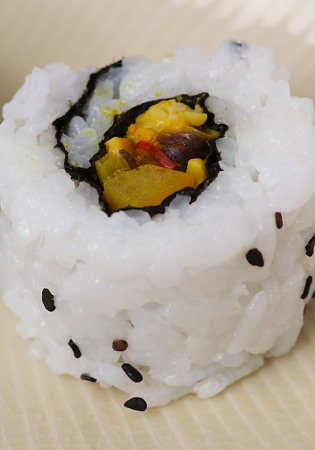 Bring a small pot of water to a boil and put the tempeh cubes in it. Boil for about 5 minutes. Remove from heat and drain water. Set aside.

Either spray a non-stick pan lightly with canola oil or use 1/4 teaspoon of oil. Place over medium-high heat and add the onion. Cook until onion becomes translucent. Then add the ginger, garlic, mustard seeds, and cumin seeds. Stir and cook just until the seeds begin to pop. Add the curry, cayenne, and tempeh. Mash the tempeh into smaller pieces using a fork or a spatula as you stir. Add the coconut milk (or substitute) and salt and cook, stirring, until the liquid is mostly absorbed.

Allow to cool before using as a sushi filling. For sandwiches, use warm or cold, mixed with a little vegan mayo if desired.

I also used strips of yellow bell pepper in my sushi rolls. I’m not good at explaining how to roll sushi, so I’ll just direct you to this webpage that explains it well with photos.