Thank you all for your get-well wishes. Yesterday was the first day I felt like eating again, and I still don’t feel like doing much cooking, so I’m sorry to say that I have no new recipes or food photos to post. Since I hate to have no new content on the blog, I’ve decided to show you some of the non-food photos I took over the holidays. Except for the last one, these were taken in Louisiana around Christmas.

What a Difference an Angle Makes

Below is a shot of a cactus that has overgrown its pot and is growing wild among the more typical Louisiana weeds and undergrowth: 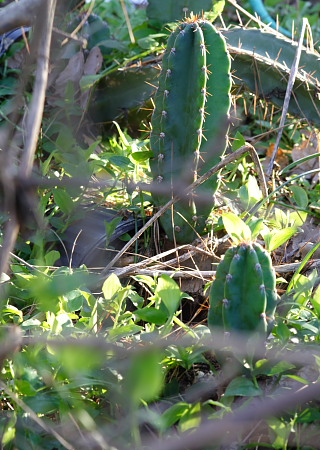 Kind of pretty, huh? Well, step back a little and you find a somewhat less beautiful scene: 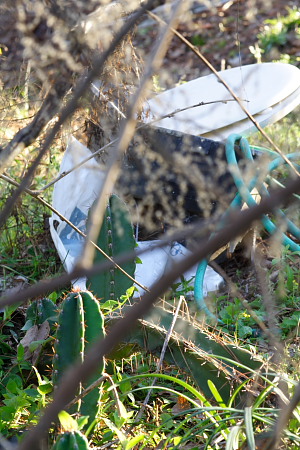 I’m going to embarrass my whole family by admitting that that shot was taken on the edges of my father’s garden. My dad saves everything for possible reuse. I can see the potential uses he might have for an old hose and a large metal pot, but I don’t have a clue what he’ll do with the toilet seat. Let’s just call this creative recycling and move on.

My parents’ land consists of an acre of yard around the house, about an acre of garden, and a few acres of pasture land and woods. When my brother and sister and I were growing up, the pasture and woods behind it were like a big playground to us. My parents weren’t farmers, so usually the pasture was empty, unless they had leased it to someone to house a couple of horses or a few cows. We’d climb trees and explore the woods, but our favorite spot was the small pond just outside the garden: 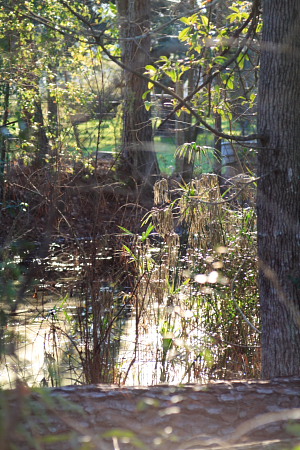 We’d build boats to cross it (it was only a couple of feet deep) and use the log bridge to go over to the tiny island in the center: 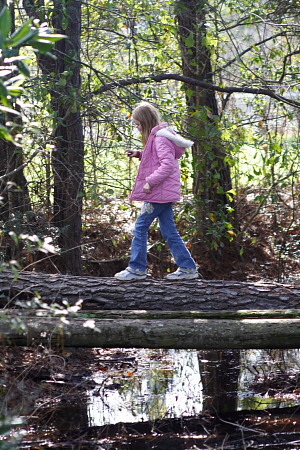 Over the holidays, I enjoyed watching E. and her cousin play exactly as my sister and I had when we were young. In the photo above, the log in front is actually the aging bridge; the tree that E. is standing on was blown down during hurricane Katrina and landed in just the right spot to supply a newer, more secure bridge. (My parents lost many trees during Katrina, including one that smashed their car and carport; this is the only case of a fallen tree actually being useful!)

In the pasture, there’s an old barn that hasn’t been used as a barn as far back as I can remember; my parents use it for storage. The boards are weathered and old and almost glowing with green growth: 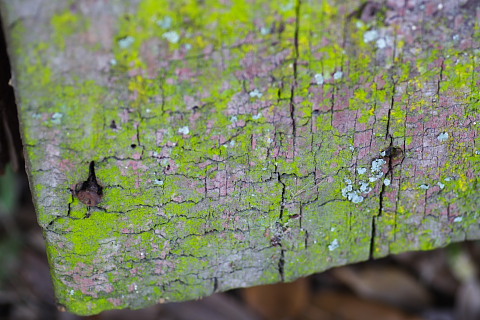 Part of the pasture is leased to someone who raises cows. My parents don’t share my vegan philosophy, and it would probably never occur to them to wonder what the fate of these cows and their offspring will be: 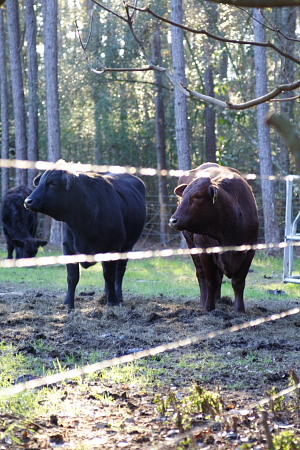 Back to the Suburbs

The final photo brings us back to my house in the city/suburbs, where cows are scarce but birds are everywhere: 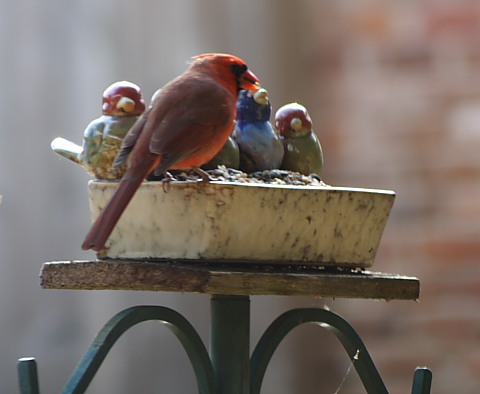 Since the cardinal is eating millet and sunflower seeds, perhaps this qualifies as a vegan food photo?

If you’ve read this far, thanks for indulging me. I’ll be back when I have some human food photos to post!