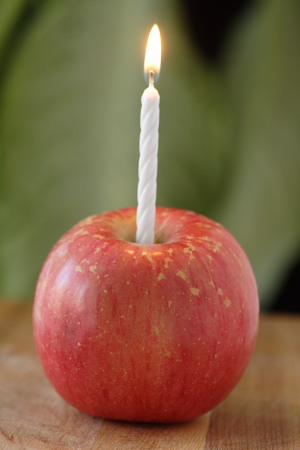 For me, 2006 will always be remembered as “The Year of the Blog.” I started writing here a year ago today with practically no experience in reading blogs and none in writing one, with no plan other than to keep a record of what I cook. My purpose, as far as I had one, was to show that eating a plant-based diet of whole, unrefined foods didn’t have to be boring. 247 posts later, I think I’ve stuck to that purpose–with only a few decadent detours like Eggnog Cheesecake and Raspberry Chocolate Cake on special occasions. Along the way, I’ve discovered why fresh Brussels sprouts are so much better than frozen, found a technique to turn okra into a snack, and transformed cauliflower into a creamy sauce. And, of course, if there’s a low-fat way to cook eggplant, I’ve been determined to try it!

What I never expected was that writing this blog would cause so many changes in my life. Though I still agonize over every word, blogging on a regular basis has made me much more comfortable as a writer; where it used to take me half an hour to write a 2-sentence email, I can now whip one out in 15 minutes. That’s progress! And my photography skills have definitely improved. Through practice, study, and a major camera upgrade, I’ve gone from taking casual snapshots to approaching photography as a serious hobby. Most surprising are the new work opportunities blogging has brought me. I’m very honored to have been asked to write the recipes for a vegan diet book and to take the photographs for a new vegan cookbook. You’ll be hearing more about both of these projects in the future!

Over the past year there have also been changes—wonderful changes—in the vegan blogging world. When I started blogging, I knew of only three vegan blogs: Eat Air—A Vegan Food Log, Vegan Lunch Box, and Knocked Up Vegan. (Of these, Chris and Darlene of “Eat Air” are still going strong, Jennifer of “Vegan Lunch Box” has published a cookbook, and Miriam of “Knocked Up Vegan” is now a new mom and has, understandably, less time to blog.) Through them, I learned of a handful of other vegan blogs. As the year went on, there seemed to be an explosion in the number of vegan blogs. Right now I have over 60 linked on my Blogs page, and I’m discovering new ones every day. Getting to know many of you has been, for me, the best part of blogging. Though we’re separated by distance and sometimes language, we have become a real community through our exchange of experiences and recipes. Thank you all for sharing so much of yourselves with the world.

Thank you also to Karina, the [Gluten Free] Goddess, whose beautiful words, photos, and often vegan-friendly recipes inspired me to begin this blog. Your friendship and support has meant so much to me!

And so I begin another year. Though I hate to use the word “resolution,” I am challenging myself to go back to basics this year, to have fewer “treat” foods like breads and cakes and more inventive ways to use fruits and vegetables. And yes—more eggplant recipes! I hope you’ll stick around for another year in the life of this fat-free, vegan kitchen.