First the good news: Baking these biscotti made my house smell magical, like being inside a gingerbread house (without those nosy Hansel and Gretel or that mean old witch). Furthermore, my daughter loved them, which surprised me because I’d always considered biscotti a grownup cookie, hard and crunchy and meant for dipping into grownup drinks like coffee, tea, or wine. Who knew they’d taste great dipped in hot chocolate soymilk?

And now the bad: Just about everything that can go wrong did for my poor biscotti. I decided at the last minute to make two different versions, one using white whole wheat and one using gluten-free flour. Maybe that was too much change to ask of this recipe, which is based on one of my long-time favorites, but it’s a miracle that they came out so good. More about all that later. First, the recipe: 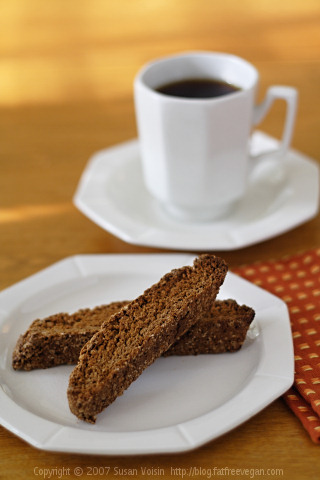 In a large bowl, combine the flour, sugar, all spices, and baking soda. In a smaller bowl, whisk together the egg replacer powder and water. Add it to the flour mixture, along with the molasses and vanilla. Mix well to combine. If the mixture is too dry and still crumbly, add a little more water a tablespoon at a time, just until the dough will hold together in a sticky ball.

Turn the dough out onto a floured surface and divide in two. Shape each half into two logs about 2 inches wide. Place them on an oiled cookie sheet or silicone baking mat and flatten to about 1 inch high. Bake for 30 minutes.

Note about flours: These turn out best with unbleached white flour. However, you can use a combination of white and white whole wheat, as I did in the ones pictured above. Use gluten-free flour at your own risk: mine, using Bob’s Red Mill gluten-free baking mix, turned out gritty and, when dunked, mushy. I advise using another gluten-free flour.

So that’s the official recipe. Here’s what actually happened.

I don’t know if it’s because my flours were dryer than usual or if it’s because of the change from using all unbleached white flour, but the amount of liquid in the recipe was not enough to moisten all the flour. I started adding water by the tablespoon and had to add about 4 of them to get a dough to form. I’ve made these several times before and never had that problem, so I’m assuming it was the flour. Don’t be afraid to add more water if you have to, but don’t make the dough too wet either. 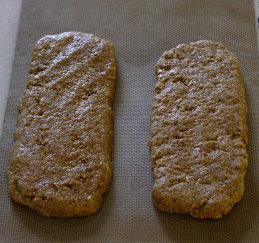 This is what the rolls of biscotti looked like after they’d been flattened. (The gluten-free one is on the left.) Note that I actually flattened them too much or made them too wide. Here’s what happened: 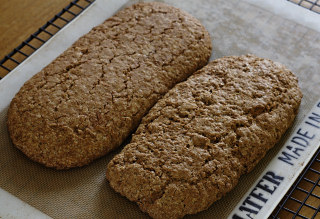 The dough grew so much in the oven that the rolls were actually touching. This is not supposed to happen, so be sure you put your rolls far enough apart and don’t make them too wide.

Funny thing, at this point, I thought that the gluten-free one looked better than the whole wheat. It’s smoother and prettier. Little did I know… 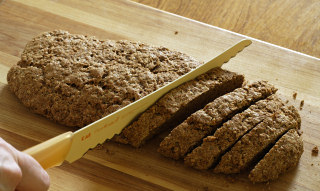 Here I am slicing the whole wheat biscotti. This went well. However, slicing the gluten-free one was a different story. First, a big chunk of it tore off as I removed it from the silicone mat. Then, I could hardly slice it for the crumbling. Here’s how it looked after slicing: 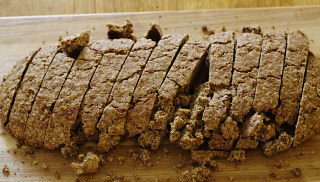 I put it on the baking sheet as best I could and decided to just pile all the crumbs in the middle and use them in place of graham cracker crumbs later. 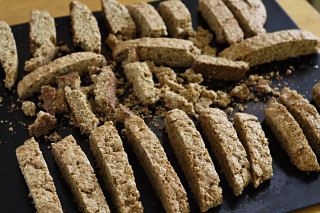 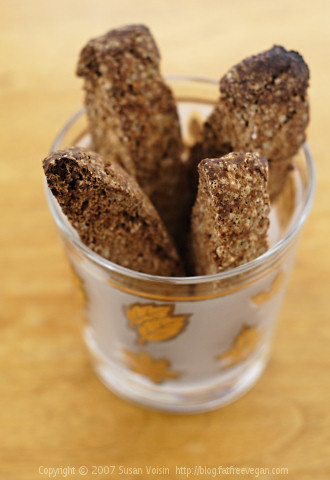 Besides falling apart more than the wheat biscotti, the gluten-free ones, pictured above, also burned a little on the ends. I had high hopes that they would at least taste good, but no such luck. Dry, they’re grittier than the wheat biscotti and dunked, they turn to mush–the kind of mush that seems to grow as you chew it so that it takes forever to get out of your mouth. Now, with some other kind of gluten-free flour, these might taste great. Also, using another egg replacer–one that will bring some stretchability to the dough–might help with the crumbiness. Maybe I should have included xanthan gum.

I know that an experienced gluten-free cook like Karina or Ellen could work wonders on these. But for now I’ll have to be satisfied that at least my whole wheat ones came out wonderfully crunchy, sweet, and zingy with gingery-spice flavor. 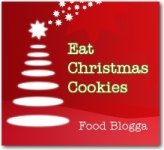 I don’t make a lot of cookies. Let’s face it, other than biscotti, most cookies depend on fat for their texture and flavor. Besides this recipe, the closest thing I make to a traditional Christmas cookie is Skinny Figgy Bars, created to imitate the fig bars my husband grew up eating every Christmas. But if you’re looking for dozens of tasty cookie ideas, be sure to check out Food Blogga’s Eat Christmas Cookies event. The entries look amazing–and some of them sound easily veganizable. I’m adding this one to the event so at least there’ll be one fat-free entry!