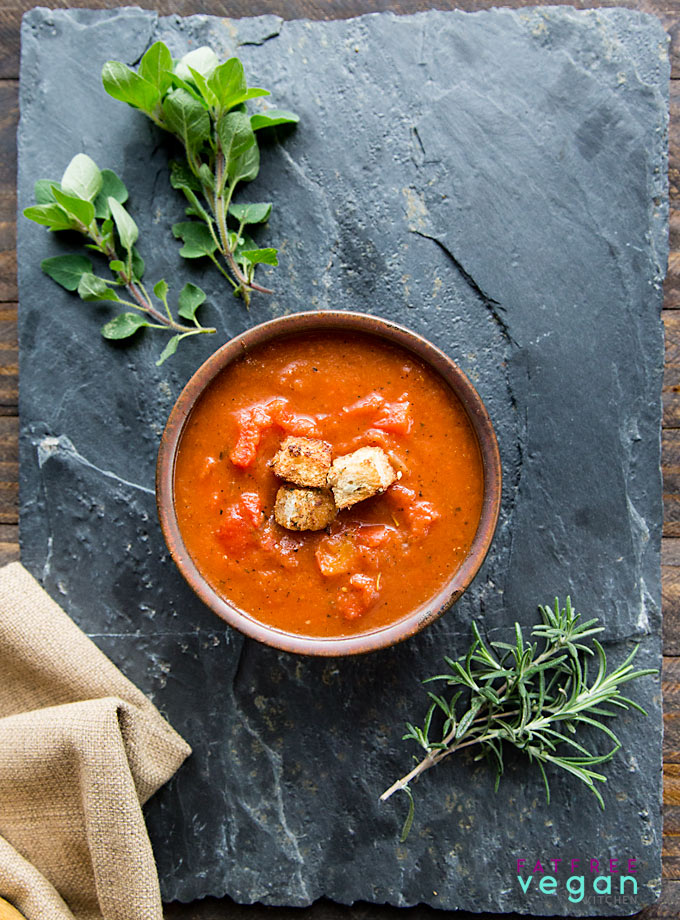 I have a new love, and his name is Tomato Soup. Yes, good old humble Tomato Soup has turned out to be a real friend to me during these long, cold February days. First we were getting together on weekends, when my husband was around to share a meal with us. But soon, we were meeting for weekday lunches, just the two of us. Eventually, I found myself tidying up afterward, hiding–or sometimes even eating–all the evidence that Tomato Soup had ever been in the house. I wanted to keep him all to myself.

But I realize now how selfish I’ve been. After all, couldn’t we all use a little comfort on these chilly winter days? And besides, I owe the scrumptiousness of my new love to an old one, one who deserves proper recognition: 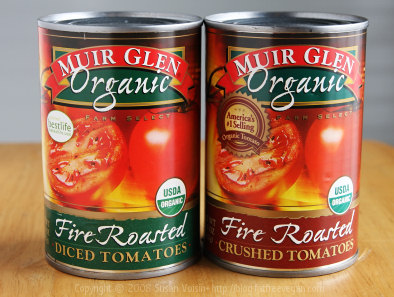 Muir Glen Fire Roasted Tomatoes. These tomatoes make everything taste good, turning plain old tomato soup into the smoky, tantalizing Tomato Soup of my dreams. The middle of winter is no time for fresh tomatoes, but fire roasted tomatoes make the perfect bowl of tomato soup possible any time of year.

The only drawback to Muir Glen is the price tag: Each can costs $1.99 at my local supermarket, and my recipe uses two, making it cheaper to buy packaged tomato soup than to make it (though homemade tastes much, much better). Since I’ve been making this soup a lot, I created a second, less expensive version using a 99 cent can of organic tomatoes that I roasted briefly in my oven. The soup takes a little longer to make this way, but it tastes just as good as the Muir Glen version, at a quarter of the cost. So if you’re unable to find Muir Glen or unwilling to pay the high price, I’ve included instructions on roasting your own canned tomatoes.

(Update: After writing this post, I discovered that I could buy Muir Glen tomatoes at Amazon for much less per can. I now use Amazon’s Subscribe & Save program to have them delivered to me at regular intervals.) 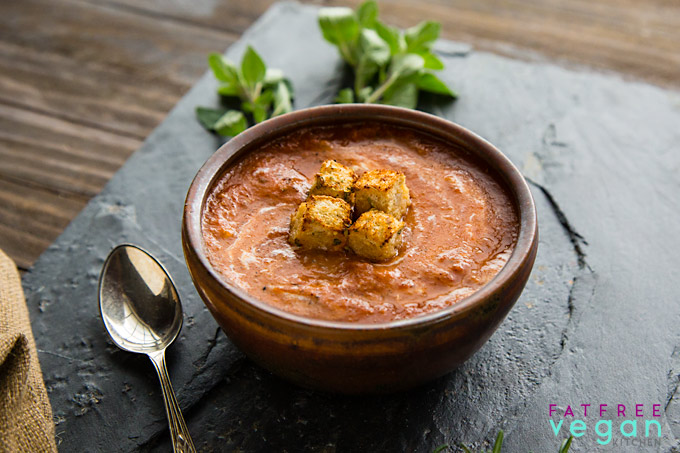 I’m fortunate to have a few herbs that grow in my garden all year long, and though rosemary, oregano, and parsley may not be the traditional combination used in tomato soup, they add a hint of spring to the soup, while roasted garlic adds a delicious mellow taste that doesn’t overwhelm the other herbs. Feel free to use whatever fresh herbs you have available, or use a teaspoon or two of dried herbs, such as basil and oregano. But watch out–you may find yourself having a love affair with Tomato Soup, too!

Note: Most croutons that you can buy are not vegan and none are fat-free. Check out my newsletter for my Ezekiel crouton recipe, and don’t forget to subscribe! 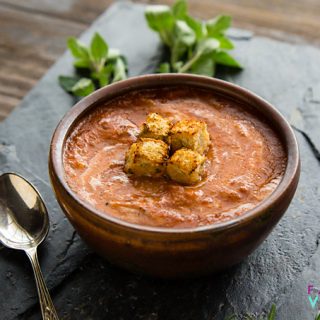 Roasted garlic gives this soup a wonderfully deep flavor, so before you begin, wrap an entire head of garlic in aluminum foil and roast it at 400F until it is tender, about 30 minutes. Let it cool, cut off the papery stem end, and then squeeze the garlic out of the individual cloves. Save the leftover cloves to add to other dishes or to spread on toast to make oil-free garlic bread.
Prep Time 10 minutes
Cook Time 20 minutes
Total Time 30 minutes
Servings 4
Author Susan Voisin

*You can also use two cans of diced tomatoes, rather than one crushed and one diced. The crushed tomatoes give a slightly creamier texture, but if you plan to blend the soup completely, it doesn't make any difference. You can also make the soup with regular canned tomatoes that you roast yourself. The procedure is a little different, and you will need to replace the fire-roasted tomatoes with the following: Preheat oven to 450F. Line a jelly roll pan or baking sheet (the kind with a rim) with parchment paper. Drain–and reserve–all the liquid from the tomatoes. Cut each tomato in half and place it on the baking sheet. If any liquid has pooled on the sheet, pour it off and save it as well. Put the pan into the oven and roast for 25 minutes. While the tomatoes are roasting, sauté the onion and celery in a medium saucepan. When the onion begins to brown, add the tomato paste (1 tablespoon if you’re using double-strength, 2 if it’s regular paste) and stir for 1 minute. Add the broth and stir in the oregano and rosemary. Simmer for about 5 minutes. Then, pour it into a blender along with the garlic and puree until smooth. Put it back into the pan and keep warm until tomatoes are ready. When the tomatoes are cooked, remove them from the cooking sheet and put them into the blender, along with the reserved tomato juice. Blend until smooth. Pour into the pot with the onion mixture, stir in the cayenne, parsley, and salt and pepper to taste, and simmer for about 10 minutes to allow the flavors to blend. Taste the soup, and if it is too acidic, add a little agave nectar or sugar, just enough to take the edge off. Ladle into 4 bowls, and stir a tablespoon of soy yogurt into each before serving.
Nutrition Facts
Tomato Soup with Roasted Garlic and Seasonal Herbs
Amount Per Serving (1 serving)
Calories 82 Calories from Fat 9
% Daily Value*
Fat 1g2%
Sodium 172mg7%
Carbohydrates 18g6%
Fiber 5g21%
Protein 4g8%
* Percent Daily Values are based on a 2000 calorie diet.

Course Soup
Cuisine Vegan
Keyword roasted tomato soup, vegan tomato soup
Have you made this recipe?Mention @SusanFFVK and tag #fatfreevegankitchen in your photos on Instagram.
Share on Facebook Pin This Recipe Share by Email 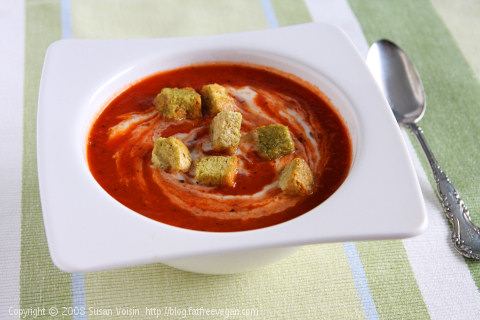