If you’ve been thinking of going vegan but have struggled with the question “What will I eat?” Erik Marcus, publisher of Vegan.com and author of The Ultimate Vegan Guide, has the answer for you. In today’s guest post, he suggests three simple foods that can make your meals quick, easy, and delicious.

For anyone who wants to be veggie but who fears a dull and limited diet, I feel your pain. I was a big-time meat eater growing up; meat showed up in almost everything I ate. So I doubt that anyone has ever contemplated becoming vegetarian with more trepidation than I did when I stopped eating meat back in 1986.

These days, you would think that newbie vegetarians would have it much easier than I did. There are ten times as many vegan cookbooks, restaurant options, and convenience foods as there were a decade or two ago. And yet, things are still much harder for the aspiring vegetarian than they need to be.

The trouble is that the primary resources that newcomers turn to—vegan cooking blogs and cookbooks—are generally not written with beginners in mind. A five layer enchilada served with chipotle lime sauce and garnished with thinly sliced Spanish olives may be a culinary delight, but this is not the sort of food that an aspiring vegetarian has the time or expertise to prepare, at least on a daily basis.

What’s needed is simple, quick, and easy food. Delicious stuff that takes only a few minutes to prepare, that delivers the nutrition you need, and won’t get monotonous. Sure, you’ll want to eat fancy stuff at least occasionally, but the foods at the core of your diet need to be hassle free. I want to be able to prepare most of my meals in five minutes or less.

In my new book, The Ultimate Vegan Guide, I offer up three of these foods:

None of these foods are likely to make the cover of VegNews magazine, but that’s not the point. In their unassuming way, these are the classic foods of a vegan lifestyle—delicious and healthful meals that can be prepared in minutes, allowing day-to-day variations that keep them from ever becoming dull. 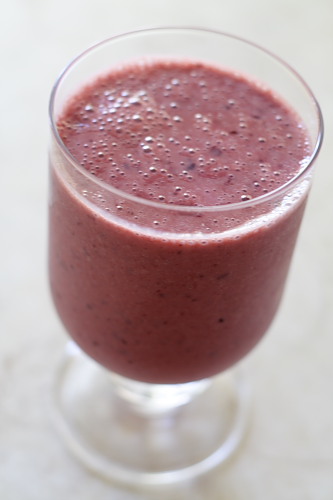 Smoothies are probably my favorite wintertime food. That’s because most fresh fruits are in scarce supply in the winter, but you can always find bagged frozen fruits at any market. Just drop a half cup or so of these fruits or berries into a blender with a cup or two of vegan milk and you’re in business. You can switch fruits from one day to the next: peaches, raspberries, blueberries, and so forth. I usually use a couple different types of fruit each time I make a smoothie. Likewise, I never buy the same variety of vegan milk twice in a row. Soymilk or almond milk, both plain and vanilla, are terrific smoothie bases. And for anyone wanting a non-fat smoothie, rice milk is a great way to go. During the winter, I usually start my day with a smoothie, and because I’m always changing up the fruit and the milk base these drinks never get tiresome. 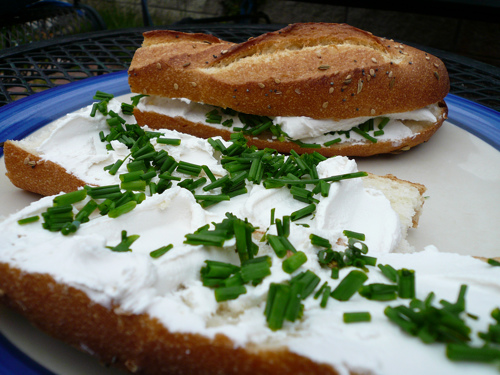 Sandwiches are even more versatile than smoothies. That’s because you’ve got three variables instead of two: the bread, the spread, and the filling. Your bread can be any sort of vegan whole grain bread, or it could be a bagel, or even a whole wheat tortilla. Sandwich spreads include mustard, hummus, nut butters, jams, and vegan mayonnaise. Fillings can include veggies like lettuce, sprouts, or tomatoes; or you could take the meaty route by choosing from the wide variety of fake meats that are available. One of my favorite sandwich fillings is flavored sliced seitan. I’m also fond of BLT sandwiches made with fake bacon and vegan mayonnaise.

Let’s finish with a quick look at salads. To me, a salad should have at least five different veggies to be interesting and satisfying. Get as many different colors into your salad as possible, since it makes for a prettier and more appetizing meal. 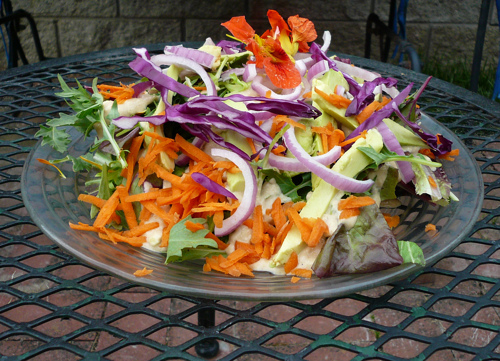 Salads may appear to be prohibitively time-consuming to make: there’s no way you can wash and cut up five different kinds of veggies in under five minutes—it simply can’t be done. But here’s a great trick: you can prepare enough of these veggies to make five servings of salad—a whole week’s worth, and easily finish this job in well under twenty-five minutes. So that works out to just five minutes preparation per salad.

I love the inexpensive airtight plastic storage containers you can buy in any grocery. I’ll put my salads into these containers and refrigerate them, and they’ll keep perfectly all week. Just be sure never to add the dressing until you’re ready to eat.

Speaking of dressings, my favorite is a homemade tahini/garlic/ginger/lemon juice/tamari blend that I can prepare in just a few minutes. I also like Annie’s Goddess Dressing. But neither of these choices are low-fat offerings. Happily, Susan has a killer fat-free Goddess dressing you can make yourself. And don’t forget toppings: roasted sunflower seeds or vegan croutons are wonderful choices.

Back when I was giving up meat, if I had only known about the versatility of smoothies, sandwiches and salads, my transition would have been ten times easier. Going veggie isn’t about learning fancy recipes, it’s about learning healthful, delicious foods you can make in five minutes. I hope you’ll start experimenting with smoothies, sandwiches, and salads: they’re ideal foods for aspiring vegetarians and vegans to put at the core of their diets.

Erik Marcus blogs daily and podcasts occasionally at Vegan.com. He is also the author of three vegan-oriented books.