This lite version of Annie’s Goddess sesame dressing has about 1/7 the amount of calories as the original and 1/13th the fat! 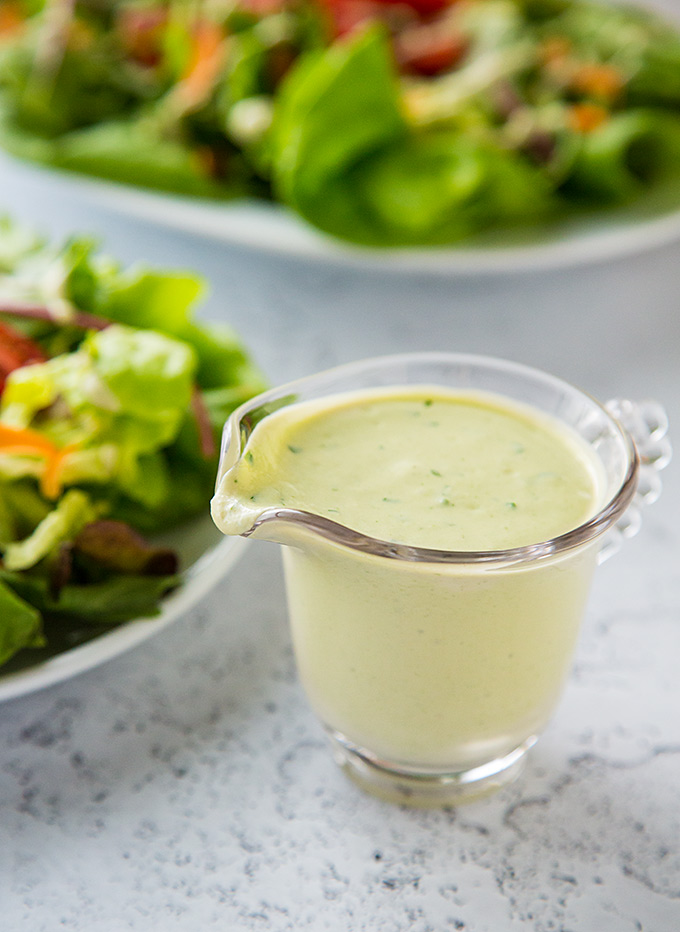 A couple of weeks ago, someone asked me if I had a lower-fat alternative to Annie’s Goddess Dressing. Over the years I’ve heard a lot about this dressing, but I’d never tasted it. Since it comes so highly recommended, I decided to buy a bottle, test it out, and possibly try to make my own recipe.

When I looked at the bottle in the grocery store, I realized why I’d never bought it before: at 130 calories and 12 grams of fat per serving, it gets 90% of its calories from fat (from canola oil and tahini). But I bought it, took it home to try it, and immediately decided I was better off never having tasted it!

It’s so delicious, it’s almost addictive: thick with a deep, almost smoky sesame taste. My husband loved it, and I knew that I needed to find a lower-fat substitute immediately or he was going to want me to keep buying it. But I also thought that it was going to be hard to come anywhere near its flavor without using lots of tahini. 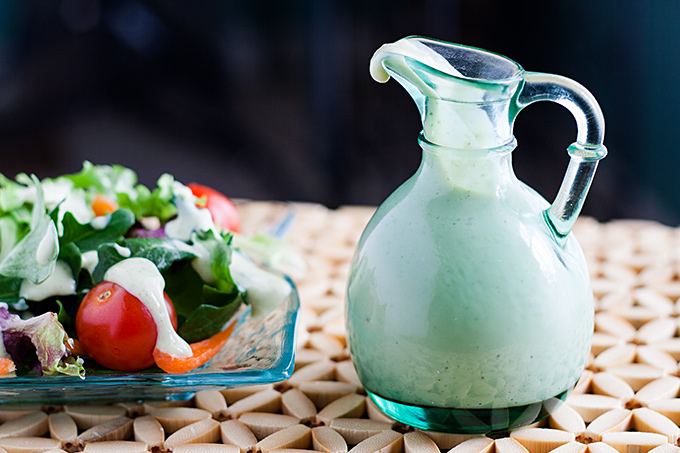 Still, I gave it a shot, and both my husband and I loved it. While my Goddess dressing doesn’t taste exactly like Annie’s, it does maintain the rich sesame flavor while managing to be significantly lighter.

Instead of using a base of canola oil, I opted instead for lite silken tofu. I used pretty much the same seasonings as Annie’s, but I cut the tahini down to one tablespoon and used 1/4 teaspoon of sesame oil to enhance the sesame flavor (I realize even this small amount of oil is not an option for some people, so it can be safely omitted.)

When it’s all blended together, this whips up into a very thick dressing, but in a “fluffy” rather than heavy way. And in terms of calories, you can have almost 7 times as much of my dressing for the same amount of calories in 2 tablespoons of Annie’s. Two tablespoons of my lite goddess dressing have only 19 calories and 1 gram of fat. Check out the nutritional comparison after the recipe.

In fact, my recipe is so light that I almost wish I had used more tahini in it. I wanted to keep it very low in fat, but if you’d like a more pronounced sesame flavor, feel free to add more tahini. Just remember, for every tablespoon of tahini that you add, you increase the fat content of each serving by about 1 gram. 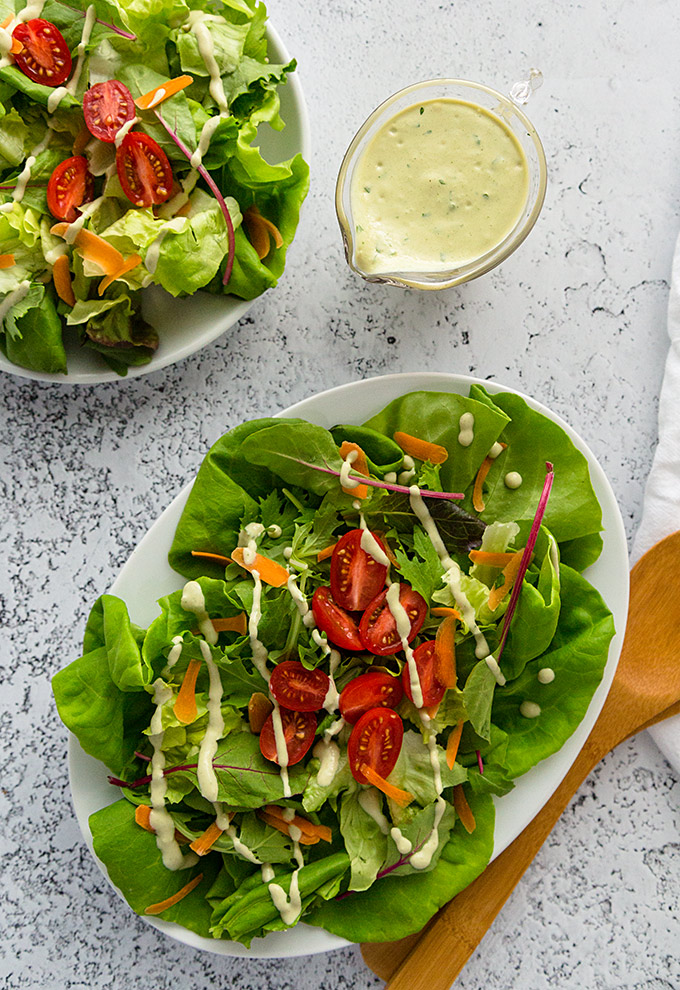 In the years since I posted this recipe, I’ve created and tested lots of low-fat salad dressings, and many have become favorites in our house. One of the hazards of food blogging is that you’re always moving forward, looking for the next great thing, and sometimes old favorites get lost in the shuffle.

That’s what happened to this recipe. In the years since I created it, my family moved on to enjoy spicy chipotle dressing and a low-fat tahini-ginger dressing, and I somehow stopped making my lite goddess dressing. But last week, I decided to pull this recipe out of the archives and make it for dinner. We all loved it so much, that I had to make it again a few days later. We’ve been drizzling it on salads and steamed vegetables and dipping pizza crust in it so much that we keep running out!

So I’ve added a few new photos to freshen up the post and encourage you to try this timeless recipe for a sesame dressing that never goes out of style. 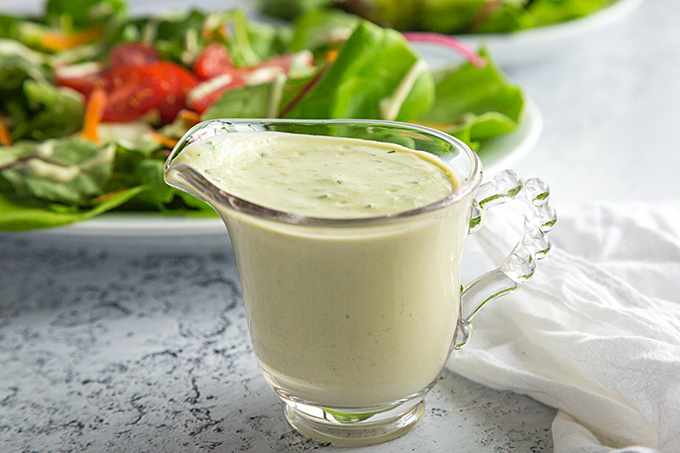 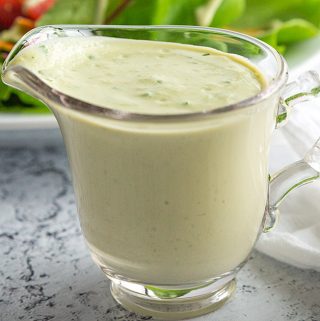 This lite version of Annie's Goddess sesame dressing has about 1/7 the amount of calories as the original and 1/13th the fat. That's 19 calories and 1 gram of fat per serving! But you can make this dressing more like the original by increasing the tahini a tablespoon at a time, until it tastes the way you like. Remember that the fat and calories go up as the tahini increases!
Prep Time 10 minutes
Cook Time 1 minute
Total Time 11 minutes
Servings 10
Author Susan Voisin

After it's refrigerated, this dressing will continue to thicken, so I advise storing it in a covered jar and adding water or vegan milk as needed and shaking well. It's safe to keep for a week, but for longer storage, I recommend freezing it. Nutrition info includes the optional sesame oil, which adds a lot of flavor.
Nutrition Facts
Susan's Lite Goddess Dressing
Amount Per Serving (2 tablespoons)
Calories 19 Calories from Fat 9
% Daily Value*
Fat 1g2%
Sodium 164mg7%
Carbohydrates 1g0%
Protein 1g2%
* Percent Daily Values are based on a 2000 calorie diet.

Here’s a nutritional comparison of my dressing to the original: 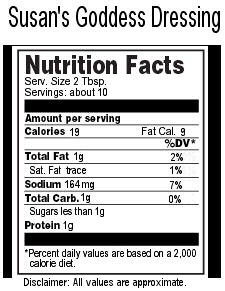 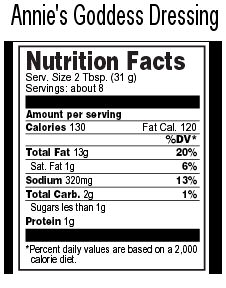 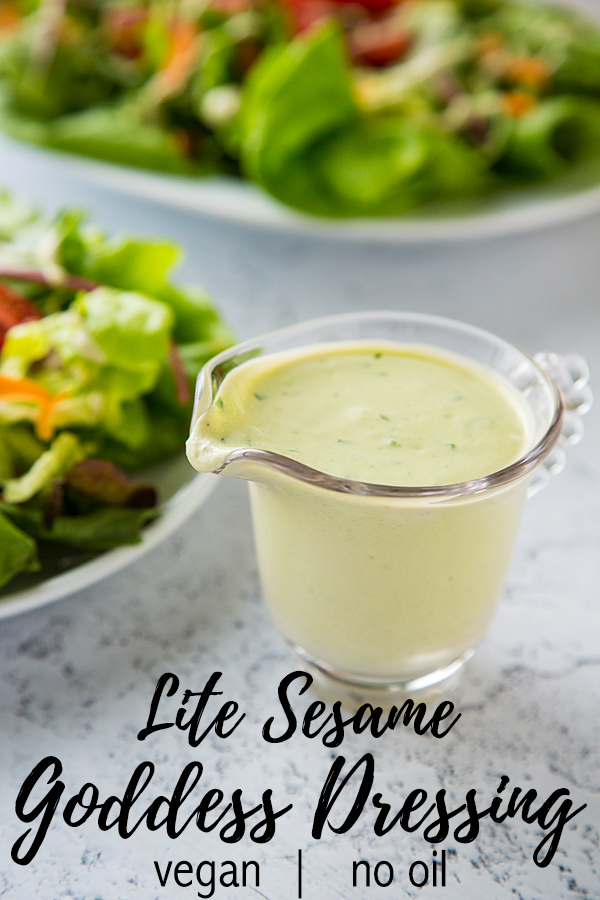