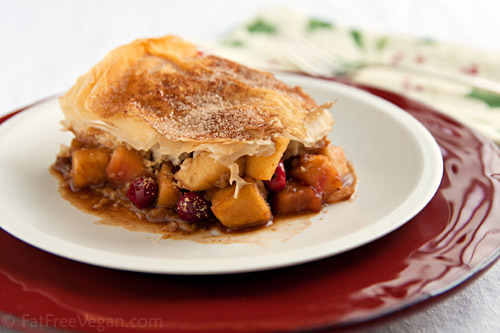 I have two modes of recipe development: carefree, fly-by-the-seat-of-my-pants and methodically planned.  When I’m working with everyday ingredients that I know are hard to mess up, I’m likely to get into the kitchen with only a vague idea of what I expect the final outcome to be and add seasonings and ingredients on instinct; most of my soups and stews are created this way.

When I’m baking or working with an ingredient that is new to me or that can be temperamental, like phyllo, I tend to be more cautious.  I research the ingredients, look at other recipes to get approximate cooking times, plan out what I want to do, and jot down a working recipe.  When I take the recipe to the kitchen, amounts may change and ingredients may be added to taste, but I usually follow the general outline of my working recipe–unless something unexpected happens.  In the case of this recipe, the unexpected happened and changed my strudel into a “strudel pie.”

My plan was to roll up an apple-cranberry filling in phyllo dough, but after I’d gotten all my ingredients laid out, ready to roll, I unwrapped my newly-thawed phyllo dough and found that I had bought small sheets of phyllo rather than large ones.  As I laid them out and covered them over with a damp tea towel to keep them from drying out, I realized that I’d never be able to roll all of the apples I’d prepared in such small sheets of pastry.  I could make a bunch of sushi-sized rolls, but what a lot of work for sushi-sized strudel! So I made a snap decision to bake my strudel as a sort of pie, grabbed the nearest baking dish (which turned out to be a little too small), and began layering instead of wrapping. 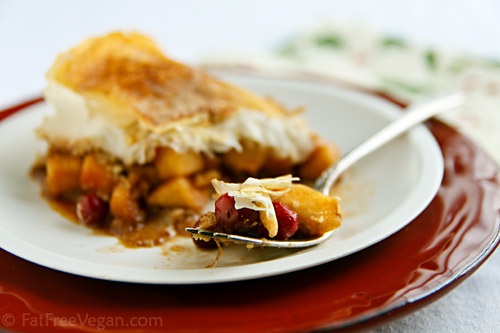 If you’re not used to working with phyllo dough, there are a few things you should know:

Even if you’re new to phyllo, I hope you’ll give this delicious pie a try.  I used sweet apples (rather than the tart cooking apples so many recipes call for) to add natural sweetness, and the cranberries provide small bursts of tartness.  Because working with phyllo can be intimidating, I’m including photos of the process as well as a diagram of the layers that you can follow, from the bottom-up. 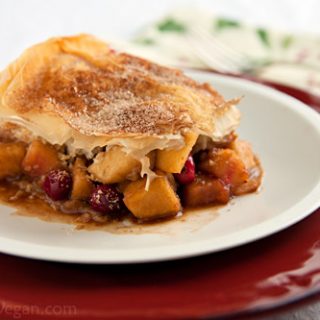 Have all of your ingredients mixed and ready before you remove the phyllo dough from the package. Keep it covered with a barely damp tea towel while you work, and wrap up the leftover dough and refrigerate it immediately when you’ve finished.
Prep Time 30 minutes
Cook Time 50 minutes
Total Time 1 hour 20 minutes
Servings 8
Author Susan Voisin

Q: What size pan did you use?

Q: Can this be made gluten-free?

A: I felt guilty creating this recipe because I didn’t want to make my gluten-free readers feel deprived. Phyllo depends on gluten to enable it to stretch into such thin layers, so there’s no such thing as gluten-free phyllo dough.  However, the apple filling would be delicious baked in your favorite gluten-free pie crust.

Q: Can I use agave nectar or maple syrup instead of the sugar?

A: Not unless you want a very soggy pie!  I used sugar because you need to keep the moisture down with working with phyllo.  Too much liquid will make it soggy instead of flaky.

Q: Can I use brown sugar or regular sugar instead of the raw sugar and molasses?

A: Yes. But–many vegans do not use brown sugars or granulated sugars because most are filtered using animal products (that don’t actually remain in the sugar). It’s your call.  I added a little molasses to give my pie more of that brown sugar flavor, so leave it out if you use brown sugar.

Q: Can I make this sugar-free?

A: You can experiment with using stevia or other sugar-free sweeteners, but I haven’t tested a sugar-free version.

Q: Can I use dried cranberries instead of fresh?

A: Yes. Since dried cranberries almost always contain added sugar, you may be able to decrease the sugar a little.

Q: Can I use Red Delicious or another type of apple?

A: If you want.  I prefer the texture and sweetness of crisp apples like Honeycrisp, Sweet Tango, Pink Lady, and Ambrosia, but use your own judgment.

Q: What should I do with the leftover phyllo?

A: How about make a Spinach-Artichoke Pie?!

Q: I have all of the ingredients except for phyllo, apples, cranberries, and sugar.  Can I substitute phyllo with flour tortillas, apples with pears, cranberries with canned pineapple, and sugar with stevia? 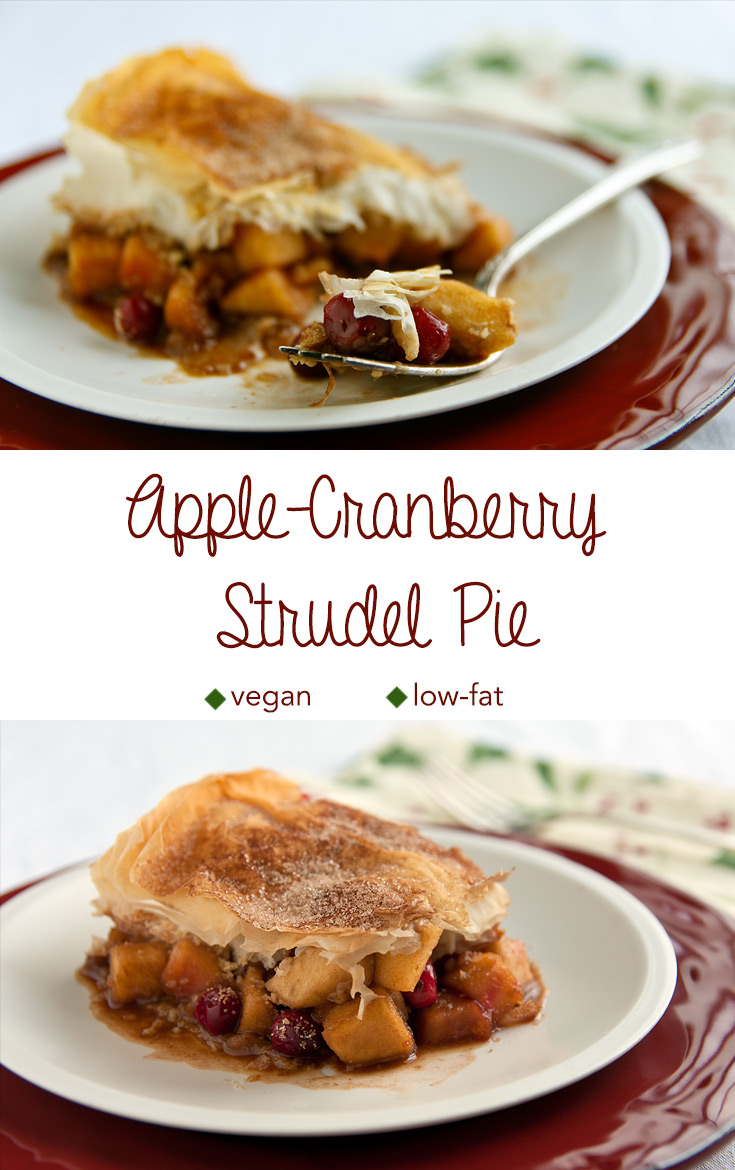