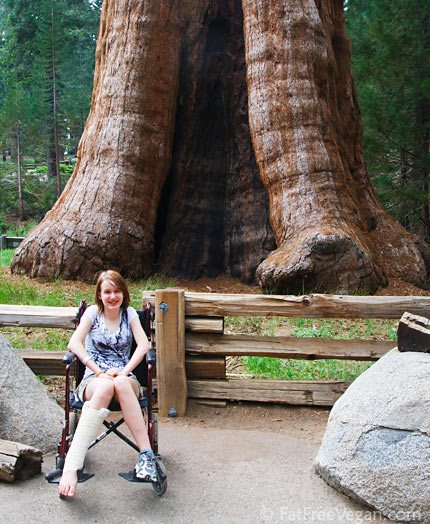 On the second day of our summer vacation, our daughter E fell and broke her foot while hiking on a rocky trail in a remote part of Sequoia National Park.  We were about half a mile away from the trail head on our way back, and we hadn’t seen one other person on the trail when she fell. Attempts to get her to her feet just resulted in screams and tears, and my husband was considering running to the ranger station for help when miraculously another couple appeared around a bend in the trail. The man, a very athletic tourist from England, offered to pick E up and carry her halfway out. And he did. I raced back to get the car as close as possible to the trail head while D carried her the rest of the way down the trail. Consultations with EMT’s and an Urgent Care doctor followed, with the result that E was put into a splint, given crutches, and told to stay off of her foot until we could get home to her doctor.

This was officially the start of a somewhat different vacation than we had planned.  Hiking in Sequoia and King’s Canyon National Parks, which we’d spent so much time researching and planning, and sight-seeing up and down the hilly streets of San Francisco were now out; driving tours and stops at places easily accessible on crutches or with wheelchairs to lend were now in. We were determined not to let the accident ruin our vacation, and it didn’t. I know we’ll all remember this as the vacation when E broke her foot, but I think we’ll also remember it as one of our best family vacations.

Here are some of the highlights: 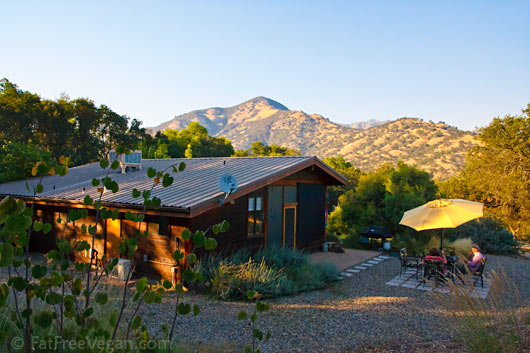 The lovely view from the Sequoia View Cottage where we spent five nights. We cooked every night in its well-equipped kitchen and ate outside when we could tolerate the heat. (It got up to 110 F the first day, but it was a dry heat more bearable than the humidity we slog through at home.) The cottage was lovely and even nicer than it sounds on its website, so if you’re looking for a private escape near Sequoia, we highly recommend it.  (E took this photo of D and me the first night, before her accident.) 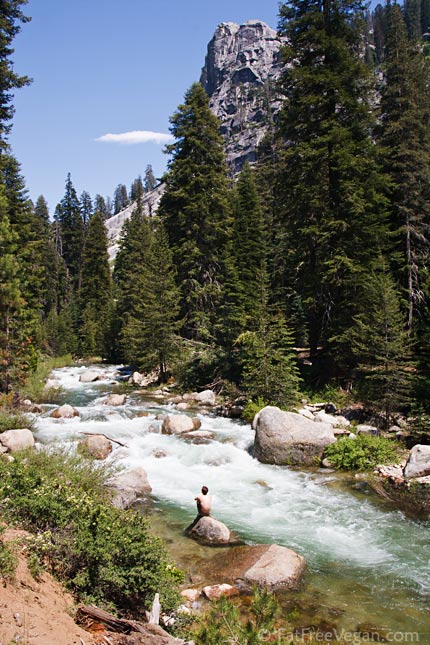 Raging rivers. A very snowy winter made all the rivers and lakes swollen and all the water white. 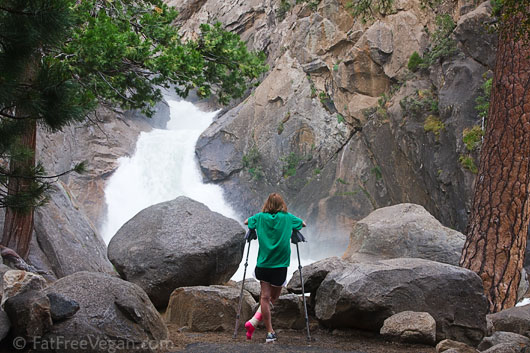 We saw countless small waterfalls and a few large ones. This one was memorable because E made it all the way to it on crutches. 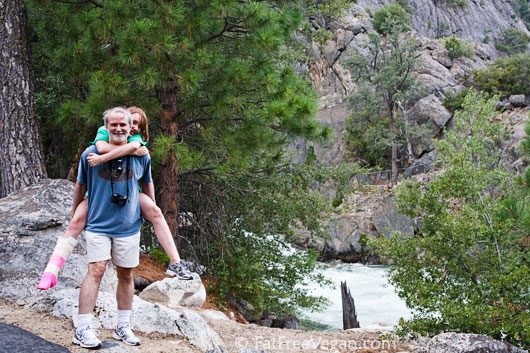 Piggyback rides. E made it all the way up to the waterfall, but needed a little help getting down. 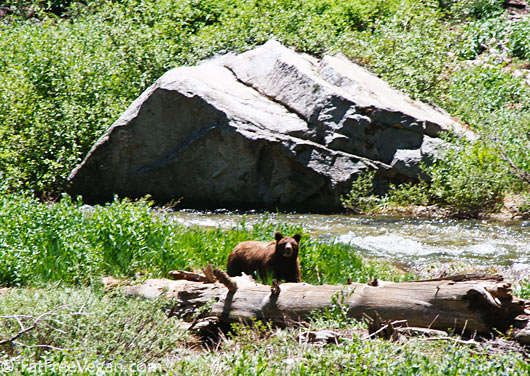 Yes, there really was a bear! We hiked up to a waterfall the first day and passed this mother bear and her two cubs along the way. Her tiny cubs (they looked like small dogs from a distance) quickly climbed up a tree and out of sight, but the mother bear continued eating grass and berries along the river. If you could zoom in on this photo, you’d see the grass in her mouth. 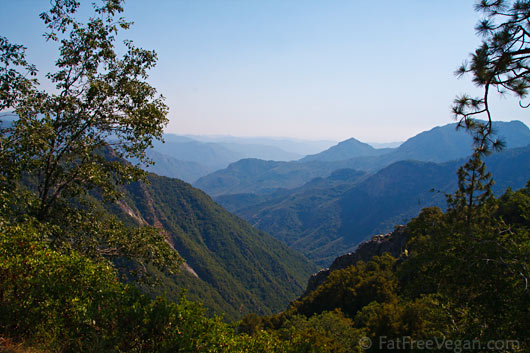 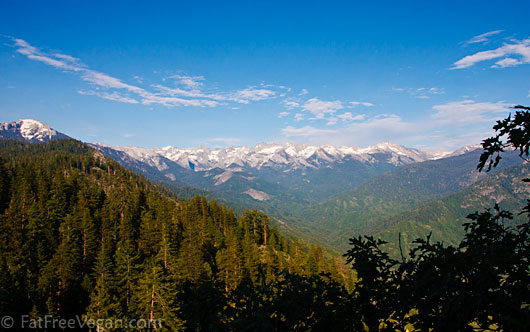 …and snow-capped mountains, both beautiful in their own ways. 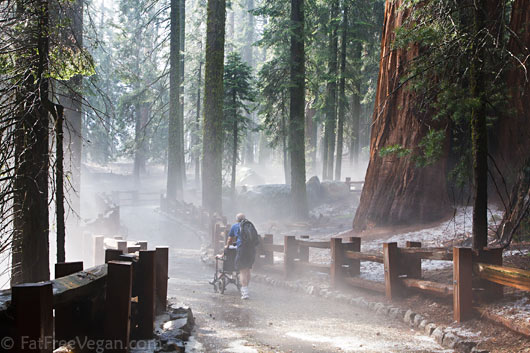 Rolling through the mist after a sudden hail storm to get to the largest tree on earth. 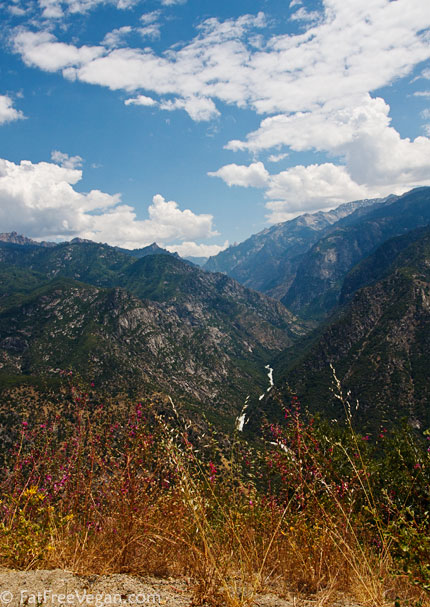 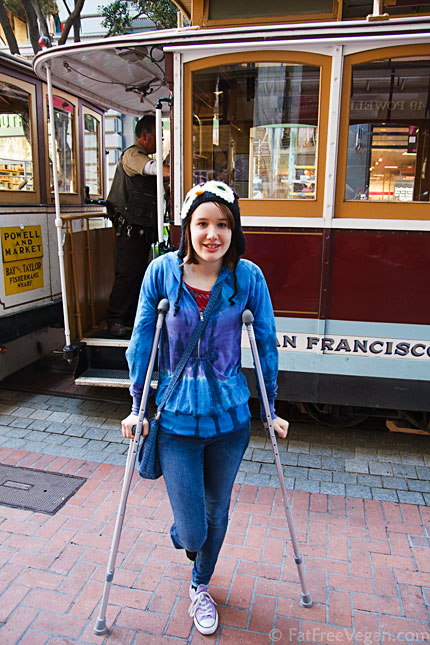 Donning hat, jacket, and jeans to hop (literally) aboard a cable car in 60-degree San Francisco. 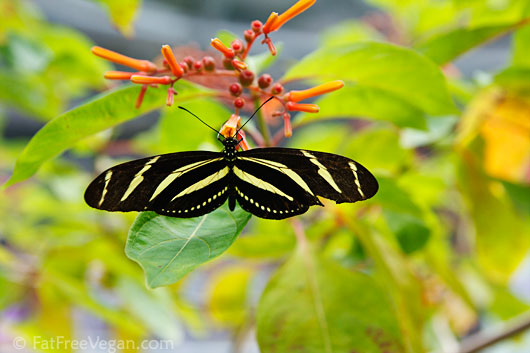 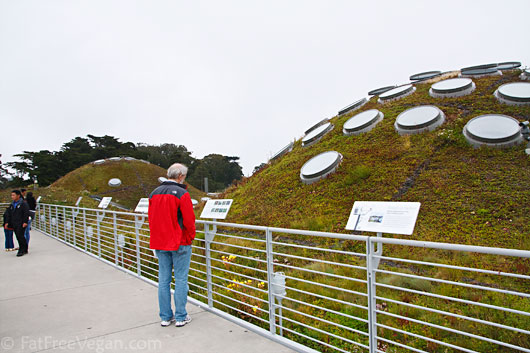 …which also sported a living roof that looked like something out of Teletubbies.

Finally, there are so many things we’ll remember that we don’t have photos of, including the fruit–succulent plums, peaches, and apricots–which really is better in California. And the restaurants. Once we got to San Francisco we were eating out twice a day, but I don’t have any photos because I don’t like taking photos in restaurants.  But we have some fabulous memories of meeting up with old friends and their new twins at Cha-Ya in Berkeley (much better in my opinion than the Cha-Ya in the Mission district) and of  an incredible meal at Source, a new vegetarian restaurant whose owner went out of his way to make sure we were happy with our meal (he brought E a complementary Almond Joy smoothie when she said her parents were too cheap to order one). E was smitten and we were all delighted with the food–I can’t recommend it highly enough.

We visited several of the restaurants I’d heard about from people on Facebook and Twitter, but E’s favorite was Cinnaholic, the vegan cinnamon roll shop that was past closing but stayed open for the girl on crutches who was so excited to see vegan cinnamon rolls.  And we actually ventured off the recommendations list and found ourselves at a little Thai restaurant called Marnee Thai, near Golden Gate Park, and were quite happy with their vegan Pad Thai and Tom Ka soup.

Upon arriving home, E saw an orthopedic doctor who promptly put her into a large, lime green cast. She’s off the crutches and rolling about on something called a Roll-A-Bout for the rest of the summer. I asked her if she’d be more careful the next time we went hiking, and she said “Not a chance!”  I hope that’s just teenage bravado, but I wouldn’t bet on it. 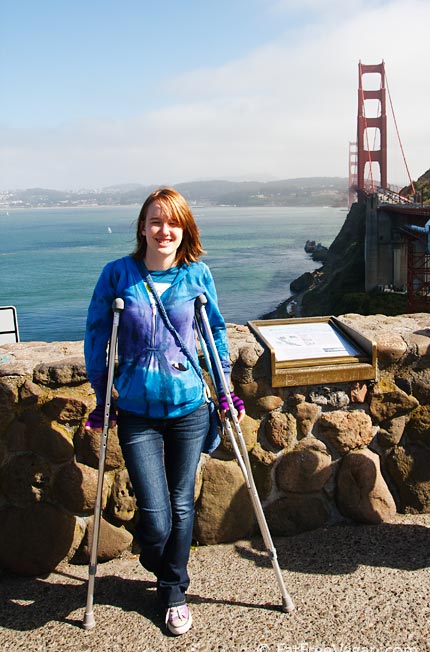 No trip to San Francisco is complete without a visit to...

I’ll be back with new recipes after we’ve all had a chance to settle in and get used to getting around a little differently than we used to.